The more we learn about Harvard University experimenter Margaret Livingstone, the more we’re convinced that she needs to be barred from laying hands on another animal.

PETA has learned that Livingston—now infamous for sewing shut the eyelids of infant monkeys for up to a year to see how it stunts their development—is also a scofflaw who seemingly believes animal welfare laws and guidelines simply do not apply to her. She possesses a rare combination of arrogance and ignorance that makes her a danger to herself and others.

PETA has obtained federal reports that reveal Livingston’s astonishingly callous and careless behavior inside her lab that runs counter to both good sense and at least a handful of laboratory rules. 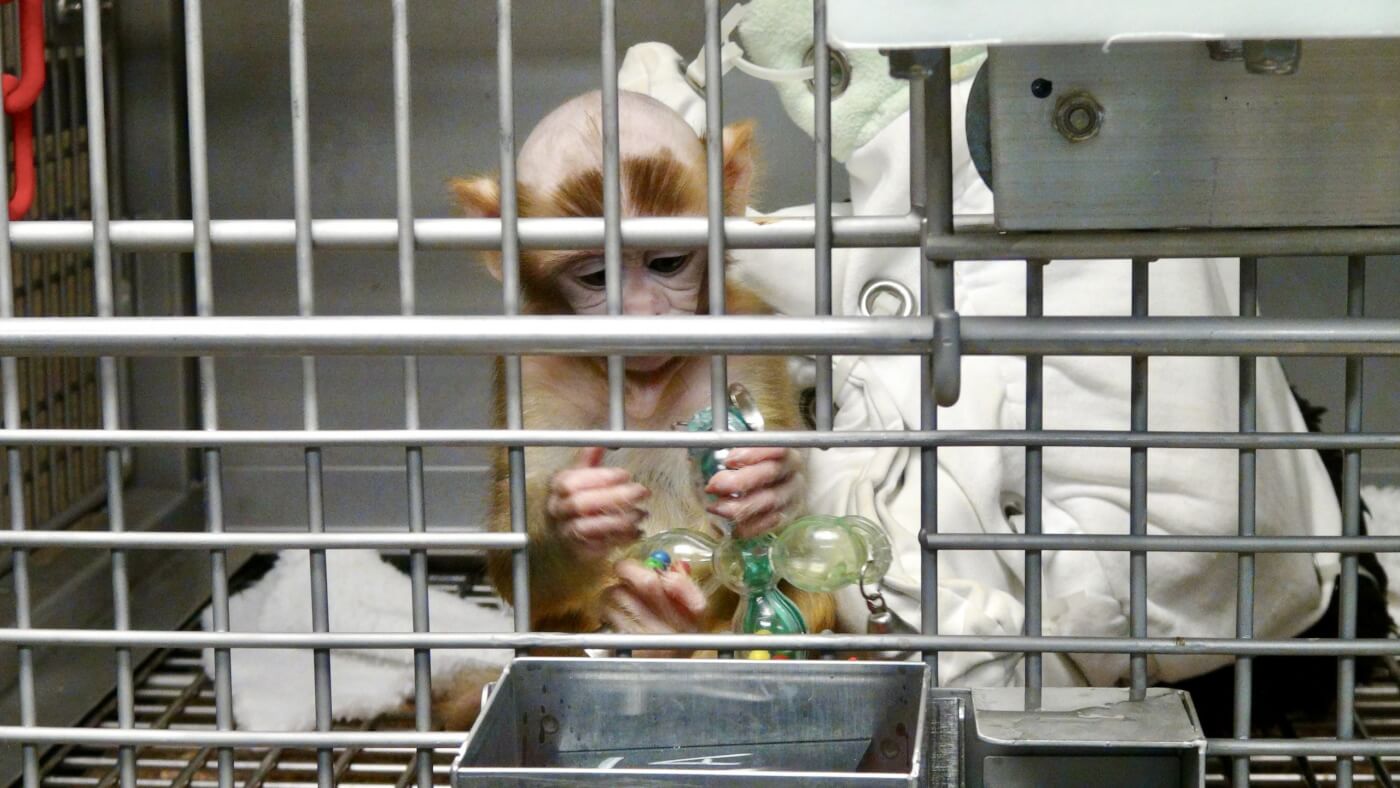 Strangled to Death by Surrogate Mother

We already know that Livingstone takes infant monkeys away from their bereft mothers for her grotesque experiments. She gives those terrified babies what is called a “surrogate” mother, which is nothing more than an inanimate object covered with cloth that hangs from their cages.

But in July 2019, staff found a baby monkey hanging from a surrogate, strangled to death. The infant—who may have been one of the monkeys Livingstone blinded or used in other visual deprivation procedures—had chewed a hole through the cloth and gotten her head stuck. Harvard responded to the incident by stripping the infants’ cages of the surrogate mothers—the only scrap of comfort the infants had.

In April 2020, a veterinarian in Livingstone’s laboratory saw her experimenting on a monkey held in a restraint chair. A common enough occurrence, sure, but in this instance Livingstone was not at all dressed for the occasion. She wore not a stitch of personal protective equipment (PPE) as required for anyone working in a laboratory around animals. It’s as though she had walked in off the street and started experimenting on monkeys.

Is this a big deal? It most certainly is, given the potentially grave risk of transmitting diseases from monkeys to humans. In a letter sent to the U.S. Occupational Safety and Health Administration (OSHA), PETA points out that not wearing PPE potentially endangers Livingstone personally and her entire laboratory, staff and monkeys included—and calls on OSHA to investigate these health and safety violations. It takes but one spark, as the saying goes.

Was it a simple mistake? Unlikely, given that Livingstone has been working in laboratories for more than 40 years. We’re pretty sure she knows the drill. She apparently just didn’t think protecting the health and safety of her staff was important enough for the inconvenience.

Records show that Livingstone’s staff are equally nonchalant about the rules.

In December 2017, someone in Livingstone’s laboratory failed to secure a latch on a cage and a monkey escaped. That monkey got in a violent fight with another one—both undoubtedly highly stressed from being imprisoned in tiny cells in a sterile, barren laboratory. The second animal sustained injuries so bad that a finger required amputation.

Not to put too fine a point on it, but a monkey lost a finger because someone in that lab couldn’t be troubled simply to secure a latch. Yet we’re supposed to trust that the accuracy of the data coming out of that lab is somehow unimpeachable?

To recap, Livingstone—who sews shut the eyelids of infant monkeys—doesn’t think the rules apply to her and has endangered the health and safety of a bumbling staff who are unable to perform the simplest tasks, and she has negligently caused the death of a baby monkey.

Since Livingstone is unwilling or unable to abide by even the bare minimum of animal care standards provided by federal animal welfare laws and guidelines, it’s imperative that Harvard tell her that it’s time to stop playing scientist and shut down her lab.

Speak Out For Monkeys!