Sangita Iyer was intimidated, chased, and threatened with death. She still fears for her life as she goes head to head with a well-funded industry that has a vested interest in protecting its secrets. But her story has to be told.

Her game-changing documentary Gods in Shackles has the potential to do for elephants what Blackfish did for orcas—but only if people get to see it. Voice for Asian Elephants Society is presenting Gods in Shackles free online this weekend. If you care at all about elephants—and we hope you do—please watch it, share it, and tell everyone you know about it.

With help from PETA India, Iyer travels back to her native Kerala, India, to trace how elephants are taken from their homes in the forest to be used as props at festivals and tourist traps. Torn away from their families as babies, they are isolated and viciously beaten to break their spirits. They are so malnourished, neglected, and abused that they become emaciated, their trunks may become paralyzed, they may go blind, and the flesh on their legs is almost always cut open, bleeding, and raw from heavy chains. 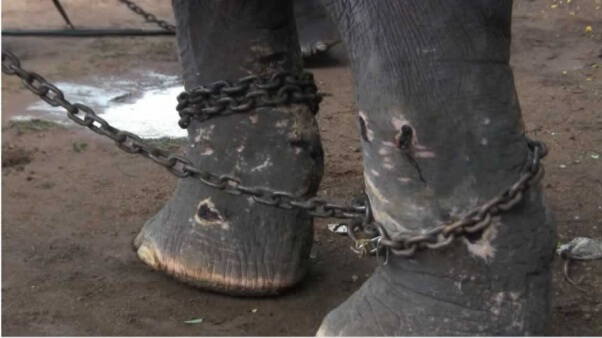 And if you’re thinking, “There’s no reason for me to care, because that’s happening in India,” think again—Americans help fund this cruelty. The elephant entertainment industry attracts tourists from all over the world. They pay to use these regal animals like carnival rides, watch them perform foolish tricks like clowns, and bathe them like bath toys. Faced with an intense public outcry, elephant attractions have begun billing themselves as sanctuaries, rescues, or orphanages. But make no mistake: The deprivation, abuse, and fear of physical punishment that elephants experience at these facilities is exactly the same.

And these majestic animals were once captured and sold into our entertainment industry as well, for our circuses, zoos, and elephant rides. They are the ones being forced to breed the next generation of captive elephant performers in the U.S. Big animals equal big money.

Whether it’s orcas imprisoned in tiny tanks or elephants shackled in chains, all animals have a fundamental right to be free. 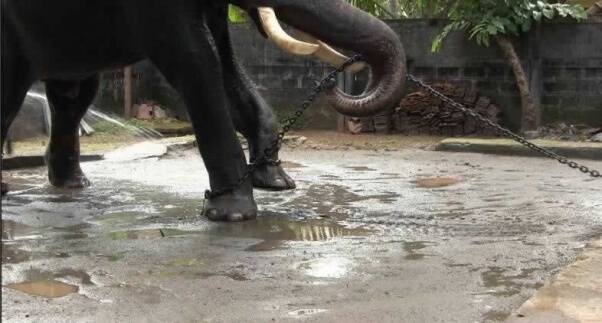 Iyer follows Sunder, an elephant used by an Indian temple who was kept chained and frequently beaten. After a vigorous campaign by PETA and PETA India—which took Sunder’s case all the way to the Indian Supreme Court—as well as hundreds of thousands of Sunder supporters around the globe, including Paul McCartney and Pamela Anderson, Sunder was finally released to a sanctuary, where he is now healthy and flourishing. 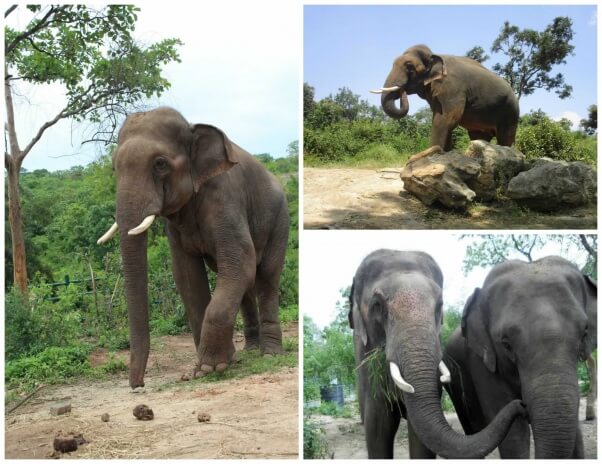 Sunder roaming free and interacting with other elephants in his new home.

Iyer hopes that Gods in Shackles can free many more suffering captive elephants. But the machine she is railing against potentially has the power and the money to silence her. The local government in Kerala was even successful in blocking Animal Welfare Board of India veterinarians from examining the elephants used in the country’s largest elephant festival, in direct defiance of a high court order.

You can stop this.

Watch Gods in Shackles free online this weekend. Share the film with everyone you know, and urge them never to support tourist traps, zoos, or circuses that exploit elephants. You can purchase a digital movie download, shirt, mug, and more to help spread the word, and a portion of the proceeds will go to PETA to help us win more victories for elephants.

We can help the world turn its back on elephant captivity. And we have to.