Sometimes, even compassionate people seem to disregard fish. I know because I was one of them. Years after I stopped eating meat, I called myself a vegetarian, but I was still eating fish. I justified it because fish aren’t raised in the same cramped, filthy barns that cows, pigs, chickens, and turkeys are on factory farms. They aren’t branded, debeaked, dehorned, or confined to tiny wire battery cages. They aren’t strung up by one leg to bleed out when their throats are slashed. Fish seemed, I don’t know, different somehow. It was a long time before I realized that fish are sentient beings, and that they, too, can suffer and don’t want to die.

My first clue came from PETA. I read on the group’s website how fish are smart. They use tools and have both impressive long-term memories and sophisticated social structures. I also learned that fish, like all living beings, feel pain. A recent undercover investigation inside a fish slaughterhouse showed conscious fish struggling while workers cut off their fins with knives and used pliers to peel away strips of their skin. And of course, there is such a thing as fish farming. Aquafarms, where many fish spend their entire lives, consist of cramped, filthy enclosures. Many fish held on aquafarms suffer from parasitic infections, diseases, and debilitating injuries. PETA named September 28 Fish Amnesty Day to remind people that fish do suffer and deserve compassion.

Not long after this fish epiphany, I joined a group of friends at the park on a Sunday afternoon. One of them was catch-and-release fishing, and it wasn’t long before he yanked a small green fish into the air. I watched the animal struggle frantically as my friend tried to remove the large hook that was piercing her mouth. I watched her writhe in pain from the wound and the lack of oxygen. I felt sick as I realized that she had the same desire to live and to be free from pain as every other animal. I would never eat another fish.

I’ve learned that even though fish are smart, eating them is, well, not so much. Fish flesh is frequently contaminated with mercury, and the most recent studies show that in some fish, mercury levels are only going to rise. And since our water supply is contaminated with medications, household chemicals, PCBs, DDT, and other toxins, fish ingest those and pass them on to us as well.

And if we still keep gobbling them up, there won’t be any fish left. Scientists say that two-thirds of all tuna, grouper, cod, and other “predator fish” have been caught and consumed by humans—and the rest will likely perish in the decades ahead. 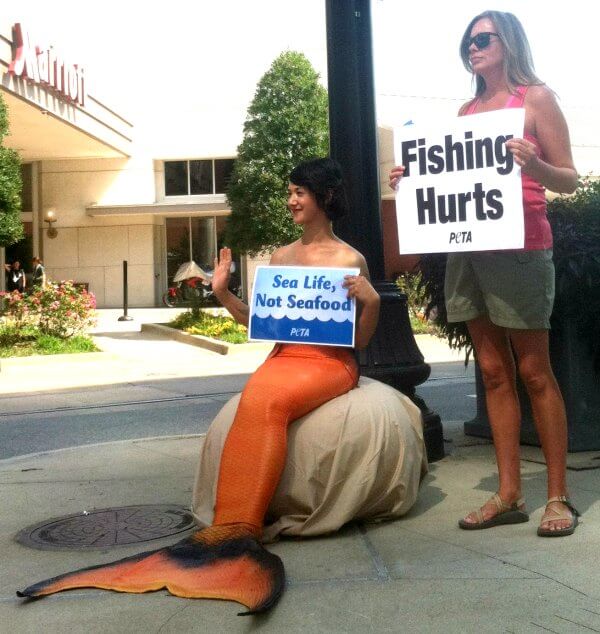 If you know someone who claims, “I’m a vegetarian, but I still eat fish,” perhaps you can use Fish Amnesty Day as a way of illustrating that, as Bruce in Finding Nemo taught us, “Fish are friends, not food.”