The U.S. Department of Agriculture (USDA) has ordered the University of Connecticut Health Center (UCHC) to pay more than $12,000 in fines for its cruel, incompetent—and sometimes fatal—treatment of animals, citing the institution for 10 violations of the federal Animal Welfare Act (AWA) in its laboratories between 2008 and 2010. Two of the citations in the penalty were the result of a 2008 complaint filed by PETA.

After PETA submitted information about archaic and deadly medical training exercises in which rabbits at UCHC had needles repeatedly stabbed into their chests, the USDA found that the facility didn’t properly seek non-invasive alternatives nor did it adequately document how the animals were used. The other violations for which UCHC was cited and fined include rabbit deaths caused by improper anesthesia and poorly trained employees.

UCHC was previously fined $5,500 by the USDA in 2007 for AWA violations, including injecting unapproved substances into a monkey’s brain and an incident in which a monkey was dragged so roughly by a metal collar that his eyes bled. That penalty resulted from complaints filed by PETA Associate Director Justin Goodman, who was then a UConn grad student leading a successful campaign to end experiments on primates at the school. Not only were the experiments permanently shut down, but following a PETA complaint, the laboratory was also ordered to return $65,000 in federal funding.

And that’s not all: In 2001, UConn’s main campus paid $129,000 in USDA fines for 99 violations of animal welfare laws. You’d hope the university would have learned its lesson by now, but as long as animals are suffering in school laboratories, PETA will be working to stop the violence. 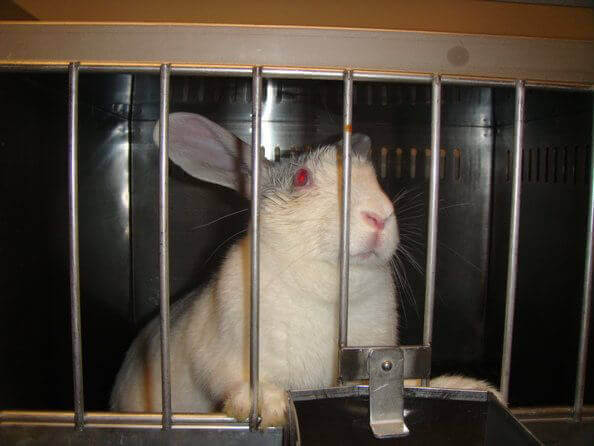 Rabbits are frequent victims of animal experimenters because they are mild-tempered and easy to handle, confine, and breed—more than 241,000 of them are abused in U.S. laboratories every year.

Last year, the University of Connecticut’s Health Center and main campus received more than $63.5 million from the National Institutes of Health, of which more than 40 percent will be spent on animal experimentation. Please ask the federal government to stop funding cruel and antiquated animal experiments and to put your tax dollars toward modern, humane, and superior research methods.