Just like Santa Claus, PETA has a list and we’re checking it twice. We know who’s been naughty or nice. That’s why execs of three companies and a university are receiving a holiday gift for their poor treatment of animals: a heaping pile of coal and a letter of admonishment delivered by PETA’s Santa. Find out who’s getting coal for Christmas:

It seems likely that Kevin Johnson, CEO of Starbucks, takes his coffee with two creams and a spoonful of hypocrisy.

Johnson has gone so far as to acknowledge that vegan milks are a “big part of the solution” to reduce the coffee giant’s carbon footprint, yet Starbucks continues to charge customers an extra 80 cents for ordering them in drinks. 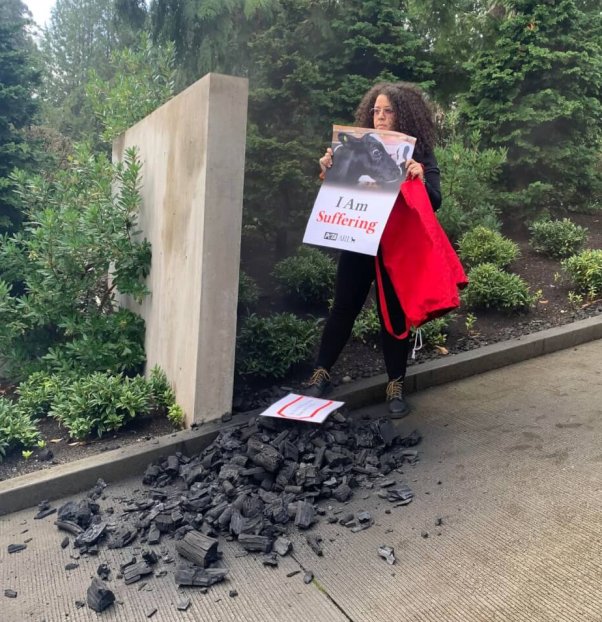 A cup of cheer is a staple of the holidays, but there’s no happiness for cows used in the dairy industry. They’re repeatedly forcibly impregnated, their babies are stolen from them, and they’re killed when their bodies no longer produce enough milk. Additionally, the National Digestive Diseases Information Clearinghouse reports that 75% of African Americans and American Indians and 90% of Asian Americans are lactose intolerant, meaning the surcharge is perpetuating dietary racism. Plus, human consumption of cow’s milk is linked to many health concerns. The holidays are about kindness and community, but Starbucks’ surcharge penalizes customers who care about animals, their own health, and the environment.

Unlike toys put together by Santa’s cheerful elves, animals are not lifeless merchandise to be sold and purchased.

Ron Coughlin, Petco’s CEO, is receiving coal this year because the company continues to sell animals such as fish, reptiles, birds, and rodents to unprepared people who often buy them on impulse with little or no knowledge of their unique needs. 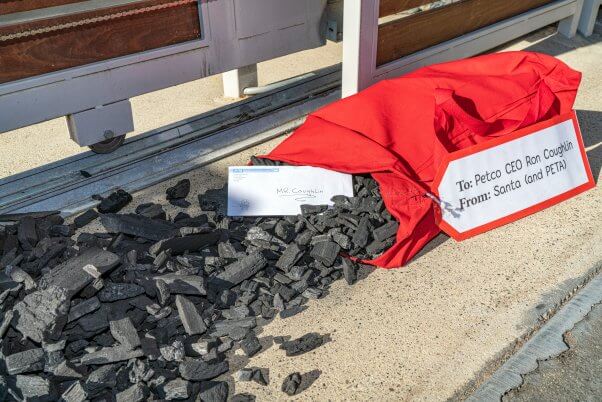 It’s estimated that 75% of captive reptiles die within the first year in a person’s home—likely because their specific needs for space, heat, humidity, and lighting aren’t met. However, many animals suffer prior to reaching Petco stores and shoppers’ homes. PETA’s investigation into then-Petco supplier Holmes Farm in Pennsylvania revealed further mistreatment: Workers left dead and decomposing bodies in plastic bins with live animals, put animals into a freezer to die in agony, and crammed screaming rats, gerbils, guinea pigs, and rabbits into a cooler used as a makeshift gas chamber. 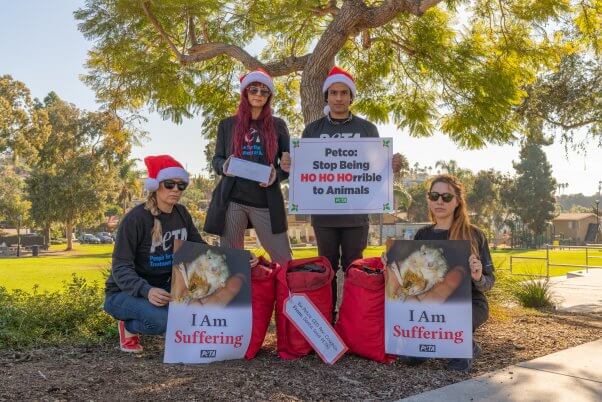 Animals should never be sold. If you’re prepared to care for an animal companion, always adopt from a reputable shelter—never buy from a pet store like Petco. 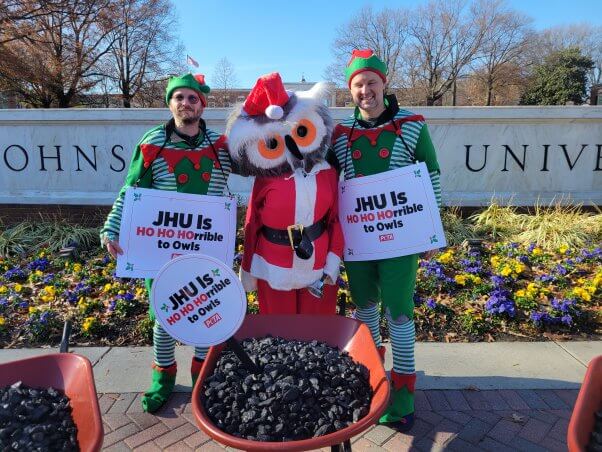 JHU experimenter Shreesh Mysore has admitted that he may “misinterpret” his worthless experiments on owls whose brains he mutilates, but he continues the deadly tests under the ridiculous guise that they could contribute to our understanding of attention-deficit disorder (ADD) in humans. Unlike us, owls have well-developed auditory and visual systems that are specialized for target selection, so bombarding them with artificial stimulation while their brain activity is measured in a distressing and completely unnatural situation does nothing to further our understanding of human ADD.

JHU needs to join scientists who understand that we are in the 21st century and can study humans with ADD through sophisticated neuroimaging techniques—such as functional MRI, position emission tomography (PET), and electroencephalography (EEG). These research methods have paved the way for current ADD treatments and require no harm to birds like the owls used in JHU’s needless experiments.

Apparently, Eli Lilly CEO David Ricks is a bit of a grinch—the pharmaceutical giant has refused to ban the cruel and discredited forced swim test, so he’s scored a spot on our Santa’s coal-delivery list. 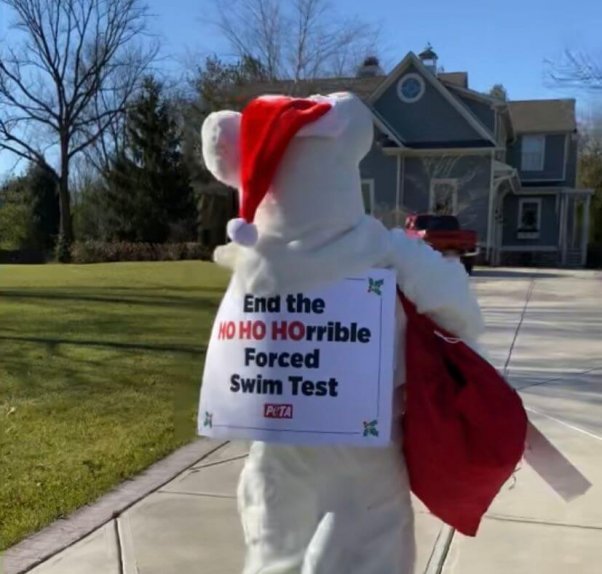 In this near-drowning test, experimenters drop mice, rats, hamsters, or other small animals—who often have been dosed with a test substance—into inescapable beakers of water. The panicked animals scramble to escape, clawing desperately at the walls of the container or diving under the water in search of an exit. Eventually, they start to float. Junk science claims that the test is somehow predictive of the way a substance will affect humans with depression—and that animals treated with effective antidepressants struggle longer—but evidence shows that it’s no more predictive than a coin toss. Even Eli Lilly’s blockbuster antidepressant Prozac hasn’t yielded consistent results from the forced swim test.

Stay off PETA’s ‘Naughty’ List by Being Kind to Animals

The best way to make it onto the “nice” list is by going vegan. Doing so saves roughly 200 animals every year, and it can change your life for the better, to boot.

There are many easy ways to be kind to animals and encourage others to act with compassion:

Make compassion your passion in 2022.