Persuaded by a friend who wanted to find a home for a young “micro-pig,” Toronto couple Derek Walter and Steve Jenkins welcomed piglet Esther into their lives. But it soon became apparent that they had all been misled—this was no micro-pig. Esther grew bigger every day, and soon she towered over the couple’s two dogs. 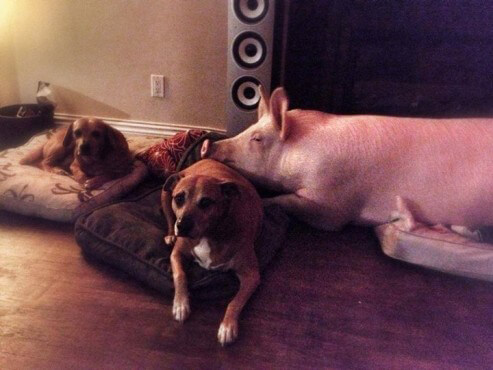 Derek and Steve surmised that Esther had been born on a commercial farm and had been cast aside because she was a “runt.” But if the couple was surprised to learn that their new companion animal had likely been destined for a dinner plate, they were even more surprised to see how similar Esther is to their dogs. She easily picked up how to sit for a treat and even how to open the refrigerator door to sniff out something yummy, such as an apple. She loves to play tug-of-war and tag and chew her toys, and naptime means finding the nearest dog or human to snuggle up to. 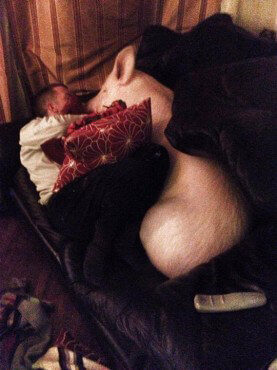 Even though it soon became apparent how big Esther would get and how much care she would need, Derek and Steve couldn’t bear to part with her. As they put it, “This isn’t Esther’s fault, she didn’t ask for the life she was given. We have the chance to provide her with the life she deserves, not the one she was bred for. What kind of people would we be to deny her that?” 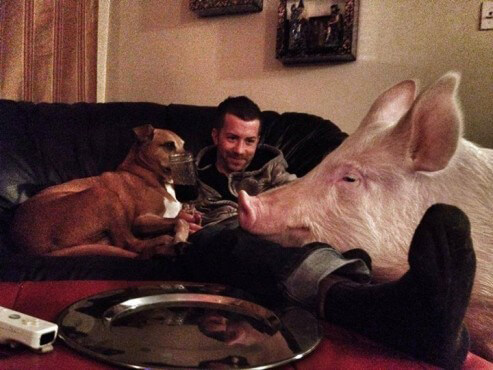 As Esther continued to grow, she continued to grow closer to her dads. And soon Derek and Steve realized that the animals they had always called “dinner” weren’t so different from the animals they called “friends.” Before long, both men went vegan. They started a Facebook page to help other people see that all animals are thinking, feeling beings who value their families and their lives.

That was how PETA first learned about Esther the Wonder Pig. We contacted Derek and Steve and asked them to share a little more of their story with us, and we’re pleased to share it with you here.

What’s the number one thing you want people to know about pigs?

I wish people would be more aware of how amazingly smart and emotional pigs are. Despite her size, Esther wants nothing more than to cuddle when she naps. She will go out of her way to find us or the dogs to lie with. She loves to play tug-of-war and chew her toys. She also loves to play tag, and we chase each other around the backyard. She’ll run and bump my legs, then turn away as if it’s my turn to chase her. It’s hilarious and amazing. She’s also incredibly gentle. We feed her by hand and can put our fingers right in her mouth—granted we spend a ton of time with her so she is very socialized. This myth about pigs being vicious and mean couldn’t be more untrue. The only time we see any aggression from Esther is if she’s scared. I can only imagine how afraid pigs in factory farms are, and although I’m no behavior expert, I have to assume their anger in farms stems from the same thing: They’re afraid. When given the chance to be loved and to be themselves, pigs are social, friendly, loving, and sensitive animals.

How has having Esther changed your life?

Our life has changed in too many ways to count. First and foremost, she inspired us to be vegan, and we’re working toward that now. We have our diet under control and are learning how to ensure we stay consistent in other areas like clothing, furniture, etc. It was a big change, but we feel amazing about it. She also caused some changes at home that were interesting and unexpected. Because she’s so smart, we had to childproof everything! Food was moved to higher cupboards, and doors to some rooms are kept closed. She just really keeps us on our toes. We need to be very aware of anything we leave lying around the house because she will explore it … and eat it if she can.

How has Esther inspired you?

This is very hard to answer without sounding weird, but I’ll try. She really just inspired us to be better people as a whole. To be more aware of how our actions, as small as they may be, can have huge impacts down the line. To be aware of where the products we use come from and how we get them. She inspired us to try and show the world the horrors we support by ignoring the treatment of these animals in factory farms. I’m not going to say Esther isn’t special because she is, but let’s be honest.

All we’ve done is taken what was bred for somebody’s dinner and given her a chance to be herself. We want people to see Esther and make the connection between her and the millions of pigs exactly like her who weren’t so lucky. To show that, given the chance, these amazing animals grow to become the most amazing and compassionate animals you’ll ever meet. I look into her eyes, and I see someone looking straight back. Someone who knows and loves me just as we do her. I see someone, not something.