Update: TV icon Bob Barker has sent a letter to New York City Mayor Bill de Blasio asking him to fulfill his promise to ban the cruel and dangerous horse-drawn carriage trade. The mayor had said that introducing the long-overdue ban would be his first order of business, yet horses are still struggling and toiling on the city’s streets. A frequent visitor to the city, Bob told Mayor de Blasio, “Whenever I come upon a horse lugging a carriage―his knees sagging from exhaustion, his eyes haunted by pain―I have to look away.” Bob joins rocker Chrissie Hynde, who recently rode down Broadway in a classic e-carriage, in calling on Mayor de Blasio to get the process underway.

How many horses must suffer and die? That’s the question that three dozen members of PETA, NYCLASS, and other animal-protection groups asked during a news conference held yesterday to draw attention to the cruel and dangerous horse-drawn carriage industry. 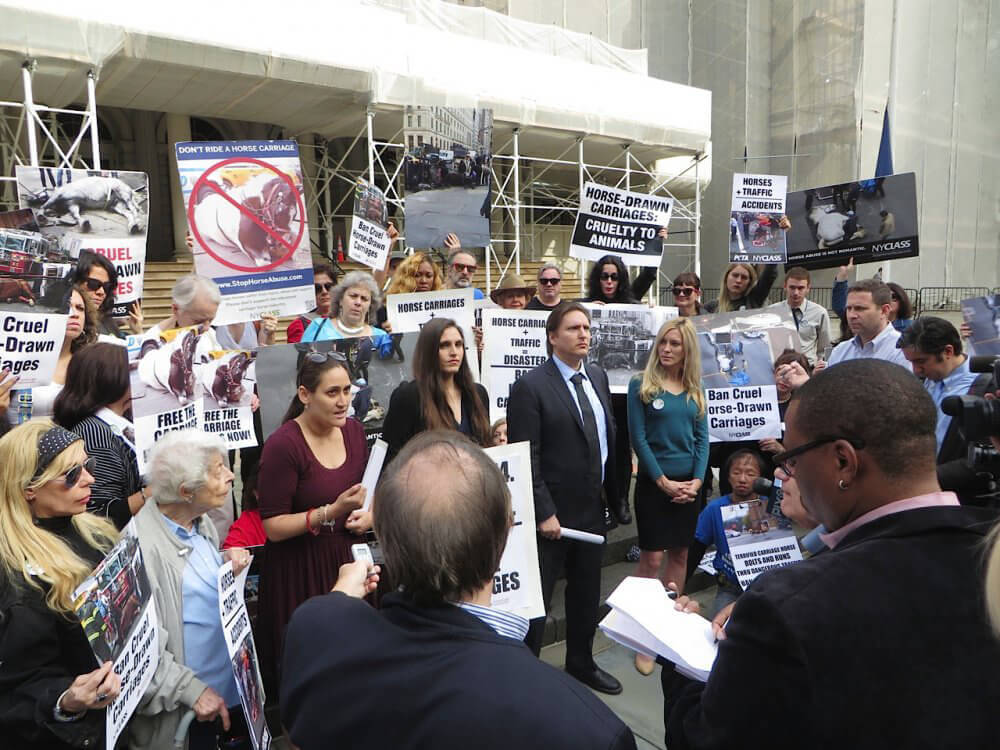 The number of publicized incidents involving carriages in New York City is higher than that of any other city that allows these rides, but records obtained from the New York Police Department detailed even more accidents and alleged “hit-and-run” incidents that had never been disclosed. Twenty-five incidents occurred between October 2009 and April 2014, including at least 12 instances in which the carriage driver allegedly fled the scene.

During one particularly troubling accident in 2009, a child riding in a carriage in Central Park fell out and was, according to police records, “rolled over by [the] wheel of [the] carriage.” The child sustained injuries to the stomach, chest, and head and was taken to NewYork-Presbyterian Hospital.

Horses have been hit by cars and cabs and have been forced to work while lame, and at least one horse, Juliet, collapsed and was beaten in an effort to get her back to her feet. She died the next day.

Mayor Bill de Blasio is preparing to unveil plans to remove these dangerous carriages from the streets. If you live in New York, please contact your City Council member and urge him or her to support a ban.