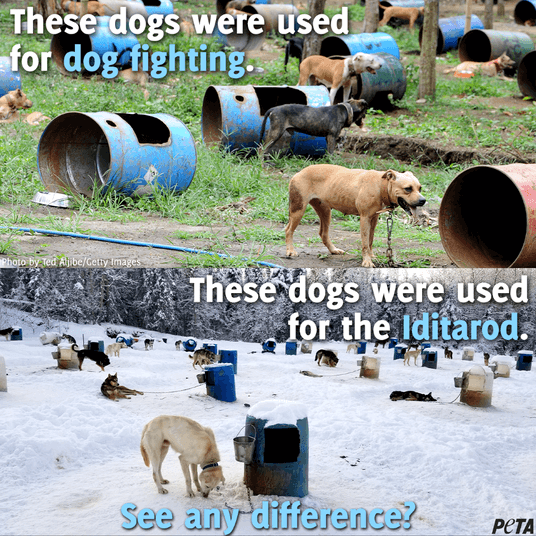 Dogs used for both these spectacles are treated like property or objects, not like the living, feeling beings with complex emotions we all know they really are. Dogs are caring and dedicated; they’re even known to seek out their guardians’ graves. Recent research shows that dogs were more likely to submissively approach a crying human than one who was visibly humming or talking, indicating that they possess an innate understanding of suffering.

When not pulling loads over long distances, dogs used for sled races—namely, the Iditarod—are stored like inventory in muddy fields, chained to metal posts, ramshackle plastic barrels, or dilapidated wooden “houses.” They’re deprived of everything that’s meaningful to them: play, mental stimulation, and companionship. As with dogs used for fighting, they’re chained up for the majority of their lives.

Although both of these twisted “sports” harm and even kill dogs, treating them like disposable pieces of equipment, only one tends to receive widespread condemnation.

The Iditarod is only one of several such races in which “mushers,” or dogsled drivers, compete for money and other prizes. The dogs are viewed as little more than snowmobiles with fur. Similarly, dogs used for fighting are bred into lives of misery and suffering so that “dogfighters” can earn a quick buck. Some dogfighters train dogs by forcing them to pull heavy weights, not unlike Iditarod mushers who make dogs pull loaded sleds. This kind of training is cruel and dangerous—it leaves the animals prone to injuries, including muscle strains and tears. Anytime you have owners who are more focused on winning than on the safety of their dogs, animals will suffer.

What Happens to Dogs Used in the Iditarod

In late 2018 and early 2019, a PETA investigator worked at two dog kennels owned by former Iditarod champions and discovered that dogs there were denied veterinary care for debilitating and painful injuries. Workers struck and kicked the animals, who were kept constantly chained next to dilapidated boxes and plastic barrels in the bitter cold. Dogs were forced to run even when they were exhausted and dehydrated.

During the race, dogs are forced to run approximately 1,000 miles in under two weeks. On average, they must run 100 miles a day, with only a few brief periods of rest. They’re subjected to biting winds, blinding snowstorms, and subzero temperatures. Many pull muscles, incur stress fractures, or are afflicted with diarrhea, dehydration, or intestinal viruses. One dog named Oshi died from aspiration pneumonia just a day after crossing the finish line last year. She probably developed the condition—which is the leading cause of death for dogs who don’t survive the race—from inhaling her own vomit.

Cockfighting, dogsledding, horseracing, bullfighting—animals around the world continue to suffer and die in cruel, archaic “sporting” events in which all odds are stacked against them.

More than 150 dogs have died since the Iditarod began, and those are just the reported deaths. That number doesn’t include dogs who died immediately after a race, during training for it, or during the off-season, while they were chained to plastic barrels or wooden boxes outside in the ice and snow. 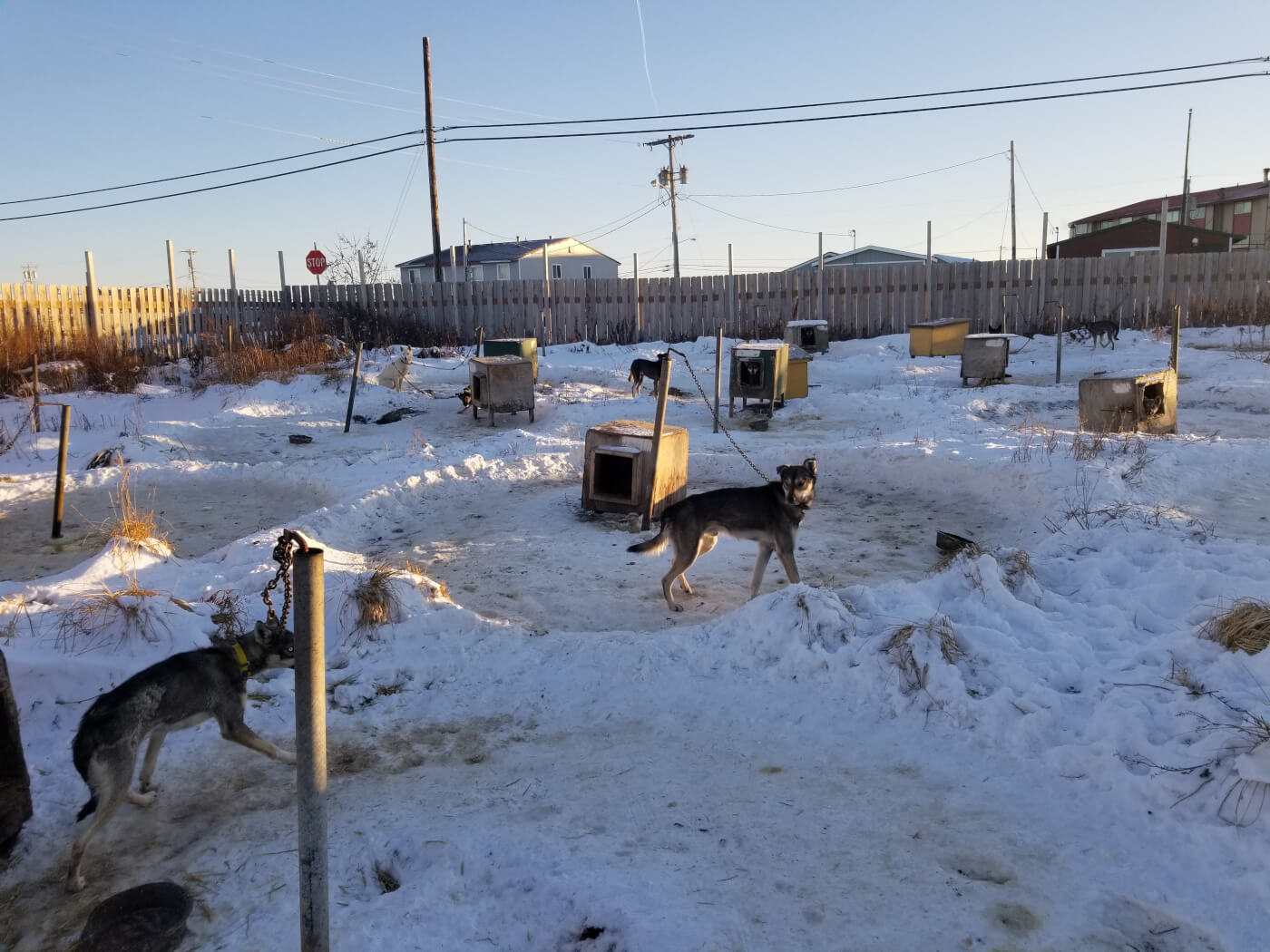 You Can Help Dogs Forced to Run in the Iditarod

Dogs who are bred, chained, and pushed past their limits for the Iditarod are exactly the same—physiologically and emotionally—as those who share our homes. PETA stands ready to help the Iditarod reinvent itself and celebrate Alaskan culture without using dogs. You can join the tens of thousands of caring people who have called on Iditarod CEO Rob Urbach to replace dogs with willing human endurance athletes, cross-county skiers, or even snowmobilers.