Update (August 4, 2022): Once again, PETA has confronted company leadership at the annual shareholder meetings for Ralph Lauren and Capri Holdings. This time, we pointed out the blatant falsity of a Ralph Lauren executive’s claim that the use of exotic skins may somehow support species’ survival by noting that conservation experts concur that hunting, poaching, and the illicit trade of skins threaten populations of wild animals, including snakes and crocodiles. On behalf of Emmy Award winner Gillian Anderson, PETA also urged Capri—the owner of Michael Kors, Versace, and Jimmy Choo—to join Chanel, Burberry, and HUGO BOSS by ending the sale of cruelly obtained exotic skins.

Investigations have documented that in the exotic-skins industry, alligators’ necks are hacked open and metal rods are shoved into their heads, ostriches’ feathers are yanked out while the birds are still alive, and snakes are pumped full of water to loosen their skin before it’s peeled off—often while they’re still conscious. Since so many companies offer high-end vegan leather options made from pineapples, mushrooms, apples, cactus, and other plant-based materials, there’s no reason for any brand to continue using exotic-animal skins.

Today’s kind consumers want to support companies that share their values—those that sell chic and comfortable vegan sweaters, coats, and accessories only.

So we’re heading to the boardroom to pressure retailers not to sell items that are devastating to the environment and that goats, sheep, and other animals suffered and died for. 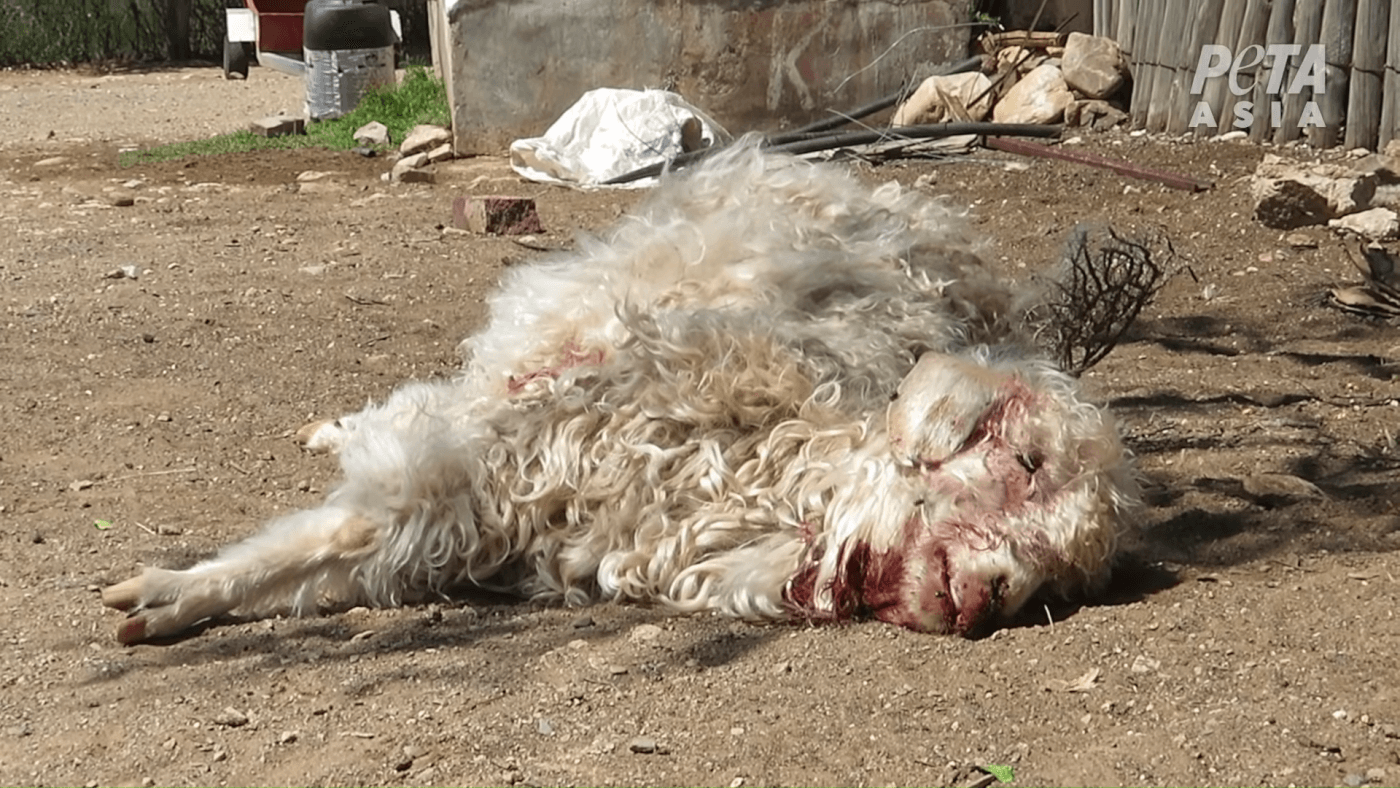 A PETA exposé of the mohair industry in South Africa and a PETA Asia investigation conducted on cashmere farms and in slaughterhouses in China and Mongolia showed that goats were left with bloody, gaping wounds from the rough hair-removal process.

They died in agonizing ways: Their throats were cut with dull knives, they were hit with hammers, and others were dragged by one leg onto the slaughterhouse floor, where their necks were slit.

Just recently, a shearer pleaded guilty to cruelty to animals after being caught beating sheep in the face with heavy electric clippers during a PETA Asia investigation of sheep-shearing crews in Australia—the 13th exposé of the global wool industry that PETA and our international affiliates have released.

In addition to causing the suffering and deaths of millions of animals each year, the production of wool, cashmere, and mohair contributes to climate change, land devastation, pollution, and water contamination.

Learn More About the Damaging Environmental Impact of the Wool

The public is increasingly turning to vegan materials and identify sustainability and animal welfare as key factors in choosing which brands they buy. Any designer or brand that doesn’t want to be out of touch should turn to ethical, vegan materials.

Why does PETA purchase stock in companies that are cruel to animals?

We frequently buy the minimum number of shares necessary in clothing companies in order to attend annual meetings, liaise with shareholders, and influence management decisions from the inside. The other companies targeted in this effort include Burberry; Chico’s FAS, Inc.; Express; J.Jill; Deckers Outdoor Corporation (the parent company of UGG); Tapestry, Inc. (the parent company of Coach NY, Kate Spade, and Stuart Weitzman); Aritzia; Lands’ End; Under Armour; and Qurate Retail Group (the parent company of QVC and Home Shopping Network).

Shop Vegan, and Speak Out for Sheep and Goats

Did you know that when sheep experience stress or isolation, they display signs of depression similar to those that humans show by hanging their heads and avoiding social interaction? Or that goats love pasta and that they’ll go to great lengths to get some? Sheep, goats, and all other animals deserve to be left in peace. Please, only sport animal-free shoes, clothing, and accessories …

… and speak out for sheep suffering for wool …

Join Us in Urging Express and Others to Ban Wool

… and for goats being killed for cashmere:

Speak Out for Goats Used for Cashmere