Massive victory! Six chimpanzees are finally safe at a true sanctuary after years of deprivation at a former breeding facility in Festus, Missouri, thanks to PETA’s determined work on their behalf.

These highly intelligent and sensitive animals were confined at a decrepit facility called the Missouri Primate Foundation, where they were often warehoused inside cramped cells strewn with trash and their own waste. The stench of urine in one room was so overwhelming that a volunteer couldn’t enter—but there was no escape for the chimpanzees forced to live there.

But not anymore. As of last week, the chimpanzees now live at an accredited sanctuary. Instead of barren cages, they’ll have a lush outdoor habitat where they can freely roam, explore, and play with other rescued chimpanzees. They’re already enjoying nutritious food and receiving expert care, and they’ll never again be exploited in any way.

For years, the Missouri Primate Foundation was the primary source of chimpanzees who were sold into the entertainment industry and the exotic-pet trade. This sad chapter in history is now closed, thanks to PETA.

Left: Chimpanzee Lisa Marie was born at the former breeding compound known as the Missouri Primate Foundation before she was sold to a private owner as a “pet” and forced to perform in shows with her Elvis impersonator owner and live in a basement in Chicago. Right: Here’s Lisa Marie after PETA helped rescue and transfer her to a lush, spacious sanctuary in 2015.

The new life that these chimpanzees are now enjoying is the culmination of years of dedicated effort by PETA, including our eyewitness investigation of the Missouri Primate Foundation in 2014, which revealed just how miserable—and likely illegal—conditions were for the animals confined there.

Here are some of our findings from that investigation:

After PETA broke our investigation, a former volunteer for the facility named Angela Scott contacted us to report concerns of abuse and neglect there. Brittany Peet from the PETA Foundation’s legal team met with Scott to hear her account, and it was as harrowing as we’d feared.

Scott described how Casey’s ex-husband would punch the chimpanzees and how workers at the facility would kidnap 3-day-old baby chimpanzees from their mothers—which she claimed involved luring the animals into cages and shooting them with blow darts while they screamed. According to Scott, one chimpanzee named Tammy became so upset that she would scream, throw items around in her cage, lift up her blanket to search for her babies, and then lie on a barrel for days with no appetite. One of Tammy’s daughters is believed to be Lisa Marie, pictured above, who was also exploited in the entertainment industry and who lived as a “pet” for years before PETA secured her a place at an accredited sanctuary in Florida.

Scott proved to be a valuable ally, even becoming a plaintiff in PETA’s Endangered Species Act (ESA) lawsuit against the former Missouri Primate Foundation.

No Hallmark Ending for Exploited Chimpanzees

PETA also launched a parallel campaign against greeting card companies Hallmark and American Greetings, calling on both to pull all cards featuring chimpanzees. One of the chimpanzees PETA rescued from the Missouri Primate Foundation, Connor, was used for controversial greeting cards that Hallmark still sells today.

On the set of his final photo shoot, Connor reportedly bit his handler and tried to attack three other people. At PETA’s urging, American Greetings eventually agreed to pull all cards featuring Connor, but the company has refused to stop selling all cards featuring chimpanzees. Hallmark, too, seems to be stuck in a cruel, bygone era. 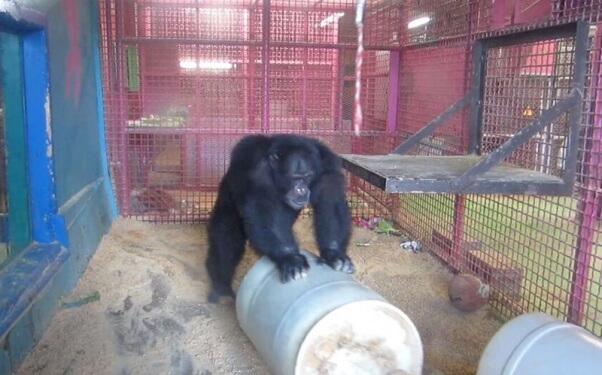 Connor at the Missouri Primate Foundation

PETA’s lawsuit quickly won a reprieve for two chimpanzees boarded at the facility named Allie and Chloe. Their owners—who were listed as defendants in PETA’s lawsuit—agreed to surrender the animals to accredited sanctuaries, where they’re both thriving today.

In 2018, Casey transferred ownership of the remaining chimpanzees to Tonia Haddix, an exotic-animal broker who sells primates and other animals to the pet trade and roadside zoos. PETA promptly added Haddix as a defendant in our lawsuit.

Then, in 2020, we negotiated a consent agreement that allowed Haddix to keep three of the chimpanzees at the facility if she met certain conditions—including constructing appropriate facilities for the animals—and allowed PETA to transfer the remaining four chimpanzees to an accredited sanctuary. The agreement specified that if Haddix failed to satisfy the conditions, all seven chimpanzees were to be transferred to a true sanctuary.

And guess what? She failed, and the chimpanzees won! Last week, the court ordered that all seven animals be transferred to an accredited sanctuary.

For the past three decades, the Center for Great Apes has provided over 40 chimpanzees with compassionate care—five of whom were originally born at Casey’s Missouri breeding compound and then sold as “pets.” This means that some of the six chimpanzees relocated last week to the sanctuary will meet their siblings for the first time and that Tammy will eventually meet one of her sons.

Pursuant to the consent agreement, Casey and Haddix are both prohibited from ever again owning or possessing chimpanzees.

However, there’s a troubling postscript to this otherwise happy ending. Tonka—the chimpanzee who starred in Buddy with Alan Cumming—was supposed to be one of the seven chimpanzees transferred to a sanctuary, but he’s missing. Haddix claims that Tonka died, yet she didn’t provide any proof, even after the court ordered her to do so. We’ve already filed a related motion with the court—we keep demanding documentation to ensure that Haddix isn’t lying about Tonka’s death and simply hiding the long-suffering chimpanzee.

PETA is also urging Hallmark and American Greetings to stop exploiting chimpanzees like Connor by demanding that they stop selling all greeting cards featuring clownish images of the vulnerable animals. Help us send these shameful, speciesist cards to history’s dustbin by clicking below:

Urge American Greetings to Do the Right Thing by Apes