Thanks to The Oprah Winfrey Show, many remember that in 2009, a 15-year-old chimpanzee named Travis—who was kept as a “pet” by a woman in Connecticut—mauled his owner’s neighbor (whom Travis knew well), ripping off her hands, nose, lips, and eyelids. Travis was stabbed multiple times, “pounded” with a shovel, and eventually shot to death. You’d think that everyone everywhere would’ve learned a lesson from this tragedy: Apes are not pets, a warning that PETA’s been shouting for years. But Umatilla County, Oregon, resident Tamara Brogoitti refused to follow experts’ advice (and common sense), and now—in another avoidable tragedy—local law-enforcement authorities reportedly shot and killed her “pet” chimpanzee named Buck after Brogoitti’s daughter was severely injured. 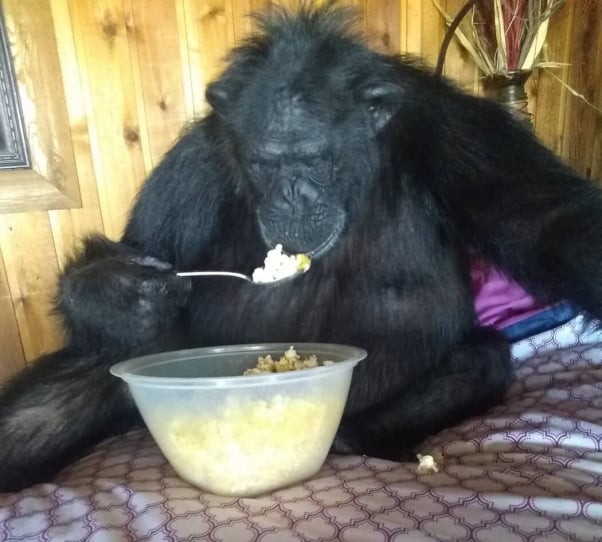 In this photo, which PETA obtained through a public records request from the state of Oregon, Buck is seen sitting and eating on a bed. He’s free to roam the house, which is not only reckless but also apparently illegal. Chimpanzees don’t belong in human households. Those who can’t live in nature need to be socialized with other chimpanzees and kept in secure enclosures that offer plenty of environmental complexity and that will protect them from being shot and killed after they unsurprisingly lash out.

Deputies from the sheriff’s office were reportedly called to Brogoitti’s home after Buck was allowed out of his cage. She had deprived the highly social animal of the companionship of other chimpanzees and kept him as a “pet” for years before he mauled her daughter. PETA had already cautioned law enforcement of this very danger, warning state authorities that she had created a ticking time bomb by engaging in direct contact with a dangerous ape. Even before Travis ripped a woman’s face off more than a decade ago, it was clear that such attacks are inevitable so long as people continue to treat chimpanzees like Chihuahuas.

It’s too late to help Travis or Buck, but you can join PETA in helping to secure a better future for other “pet” primates.

Have you heard of the Captive Primate Safety Act? It would outlaw the purchase and transportation of primates across state lines and would prohibit dangerous direct contact between them and the public. If passed, humans would no longer be able to attend an exotic-animal auction in another state and bring home a “pet” monkey or order a monkey online from out of state. The law would afford regulated primates significant protection, which is why we need you to join us in asking your members of Congress to support it:

Did you know that baby chimpanzees stay by their mothers’ sides for four to five years or that the males never leave the group they’re born into? Chimpanzees are truly fascinating—but as with all exotic animals, that doesn’t make it OK to keep them as “pets” or exploit them in any way. Learn more about great apes, including chimpanzees, and ways to show them compassion in Animalkind, one of the “best Animal Behavior books of all time.”