Slogging through floodwaters, mud, and debris, PETA’s Community Animal Project fieldworkers were out and about during and in the aftermath of Hurricane Sandy to respond to calls about animals left outside in some sort of endurance test  imposed on them by their owners. Here are just two of them—dogs who are very lucky to be alive after their owners left them chained to trees during the hurricane. 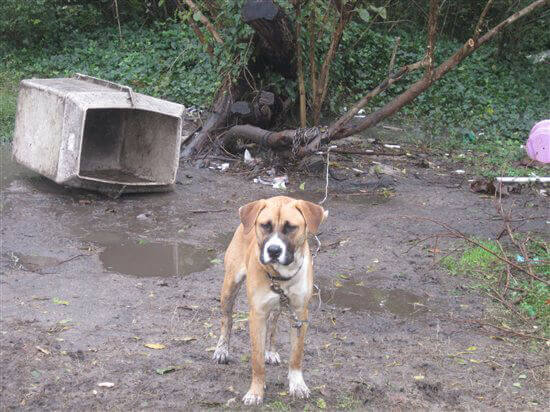 Brownie had to ride out up to 60-mile-per-hour winds and buckets of rain in a toppled-over airline crate. The chain he was on had become wrapped around a tree, and he was surrounded by scattered debris and mud puddles. Brownie’s neglectful owners decided that he was too much trouble when asked to take him indoors, so they gave him to PETA’s fieldworkers, and we delivered him to our friends at the Virginia Beach SPCA, who offered him a warm, dry, indoor residence right away while they search for a far better family for him. 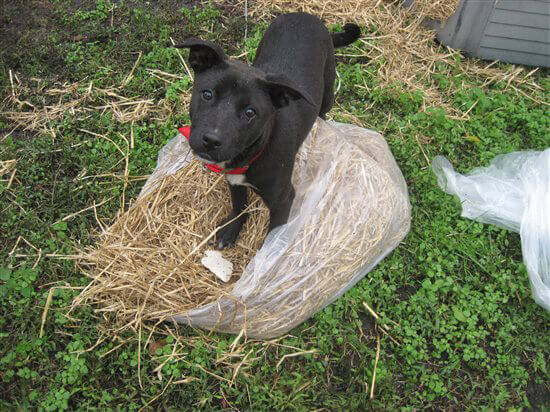 Tipsy’s small, filthy doghouse didn’t offer much protection from the hard-driving weather, and when CAP workers found her, she was soaked to the bone. We gave her a roomy new doghouse, moved her to a grassy spot, covered her yard with dry straw, cleaned her food and water bowls, and gave her a much-needed toweling off. We are in talks with her owners, hoping to get them to change their ways and become real guardians now.

As the Eastern Seaboard recovers from Hurricane Sandy, we will undoubtedly hear the stories of animals who, unlike Brownie and Tipsy, were not found in time and lost their lives because their owners couldn’t care less about their safety.

Natural disasters aren’t preventable, but the tragic deaths of companion animals during disasters certainly can be. Please sign PETA’s petition urging the governors of each state to ban chaining during extreme weather.