The world is shocked by China’s dog meat festival and by videos showing that animals are eaten alive in restaurants in Guangdong. But in that country of 1.3 billon people, a massive shift in ideology is happening. Our friends at PETA Asia are helping millions of people see that animals are not ours to experiment on, eat, wear, use for entertainment, or abuse in any other way. Here are five ways that the group has jumpstarted an awakening in a nation with virtually no laws protecting animals.

When a PETA Asia eyewitness revealed that bears, monkeys, tigers, lions, dogs, and other animals are chained by the neck, beaten, and starved to compel them to perform tricks, people were rightfully outraged.

The news took media outlets—including government-controlled newspapers—by storm, and they reported extensively on these circuses, leading to raids on training facilities. This sent a strong message to the circus industry, which hadn’t even thought to hide its rampant abuse. The outfits in question had never expected any repercussions—let alone serious ones!

2. Revealing That Dogs Are Beaten and Animals Are Skinned Alive for Their Fur

When PETA Asia was established 12 years ago, existing animal-protection groups scoffed at the idea of trying to bring down the fur industry in China. But it pressed on and exposed fur farms on which animals were skinned alive as well as leather manufacturers that exported goods made from dogs who were beaten to death with wooden poles.

An eyewitness investigation of Chinese angora farms documented that rabbits screamed in pain as workers held them down and ripped out their fur. After seeing this footage, over 100 major fashion brands banned angora from their collections.

A China News Service report revealed that global demand for animal skins has fallen so dramatically that at least one major factory in China—the world’s largest supplier of fur and leather—is stockpiling masses of skins in storage refrigerators and operating with only a skeleton crew of workers. 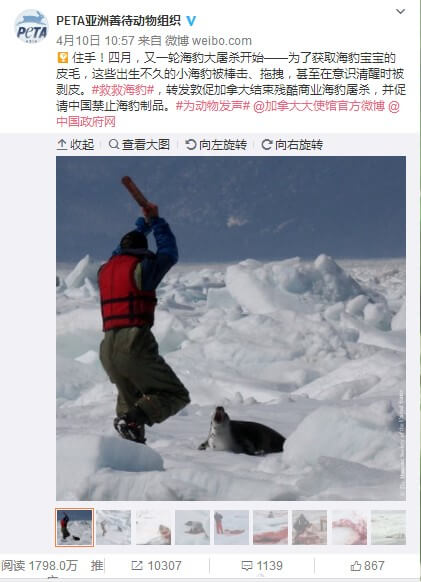 Chinese consumers are dropping fur, too. More than 240,000 residents have signed an online pledge to go fur-free, and many celebrities—including A-list actors Sun Li, Yang Mi, and Bo-Lin Chen—have spoken out against wearing it. Over time, more public figures have followed suit, and the cruel industry is under increasing pressure to fold.

Just like in the U.S., social media in China has been a near-limitless tool in garnering support for animal rights. It’s not unusual for a PETA Asia video to be watched 5 million times. Thanks to a strong presence on Weibo—which is a sort of Twitter and Facebook hybrid—the group has received more than 200 million video views in that country. PETA Asia’s reach and engagement are so successful that the group consistently ranks among the top 10 Weibo accounts of all charities nationally, bringing messages of compassion for animals to countless people. 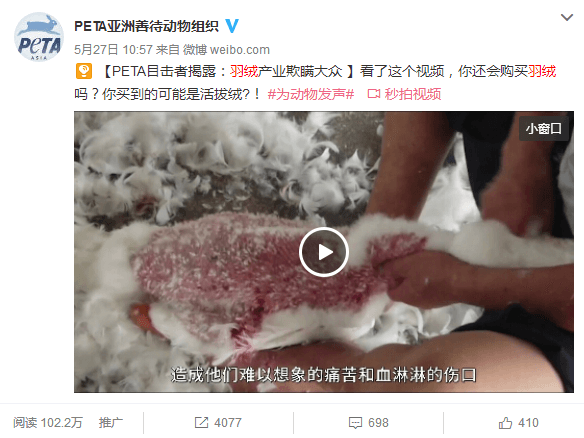 Currently, cosmetics companies are required by law to pay for cruel animal tests in order to sell their products in China. But after four years of working hard to persuade the Chinese government to change its stance, scientists at the Institute for In Vitro Sciences—whose work in China was first funded by a grant from PETA—won a landmark victory: Officials will soon, for the first time, recognize data from a non-animal test method for safety evaluations of cosmetics.

With over 50 million vegetarians in China, PETA Asia continues to support new vegans every day with information and advice—and a Chinese-language vegan starter kit that can be downloaded and printed is in the works.

The group is also teaching the next generation of leaders about animal rights and dignity. In 2015, it launched a groundbreaking new exhibit called “Animals ≠ Entertainment.” The first-of-its-kind display toured universities and festivals across China, reminding students that animals are not ours to use for entertainment.

Be a Voice for Animals

It takes only one individual to reach hundreds of people and encourage them to treat all living beings with compassion. Animals’ voices are often ignored, so they need us to be brave in speaking out in their behalf.

I Want to Take Action!