At the Yulin festival in China this year, thousands of dogs and cats will be cruelly killed and used for food. The thought of killing, cooking, and eating dogs and cats is unimaginable to most of us because they’re our family members and our best friends. We can imagine their fear when they’re caged with other dogs and the agony that follows when they’re bludgeoned or even skinned alive before being turned into pieces of meat. Or, as PETA Asia’s eyewitness investigation has revealed, they are turned into pieces of clothing. Please join PETA in taking action that will have a lasting impact not only for Yulin’s dogs but also for all animals, and help us expand our educational efforts in China itself. The future of animal welfare in China depends on a change of attitude in the country. 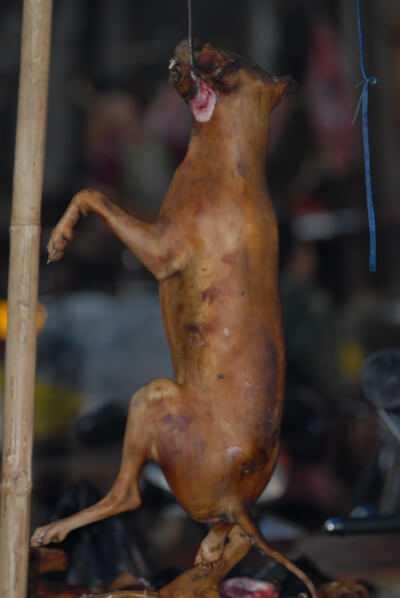 Cruelty like that at Yulin is the result of not having adequate animal-welfare laws. Please respectfully contact your local Chinese Embassy and urge officials to do everything in their power to ban this cruel festival and to pass legislation that protects animals. Please be culturally sensitive. Find your local embassy here.

Help Us End Cruelty in China Through Education

Most Chinese citizens do not support the Yulin festival, and PETA Asia is working on the ground in China to urge Chinese citizens to condemn the slaughter of dogs and other animals killed for meat.

Grassroots work is essential to the success of the animal rights movement, and PETA Asia works—in China itself, not on the other side of the ocean—with local activists and groups there. Some efforts to further public education in the country include the creation of PETA Asia’s Chinese website and our hugely popular Chinese social media accounts.

We have also created Chinese leaflets on topics such as vegan living, fur, spaying and neutering, circuses, and zoos that we provide to local groups and activists free of charge. We frequently visit schools and universities across China to educate the next generation on the torture that dogs and cats face during the Yulin festival. We also partner with companies to educate people about the need to make compassionate choices.

As more young people learn about cruelty to animals and ways to stop supporting it, there is great hope for the future of all animals’ lives. Our work in China is changing hearts and minds. 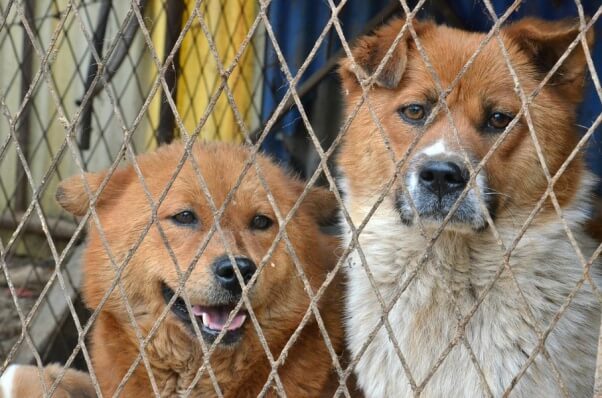 A deeply disturbing PETA Asia undercover investigation revealed that dogs are bludgeoned and killed so that their skin can be turned into leather gloves, belts, jacket collar trim, cat toys, and other accessories. At a slaughterhouse, the investigator filmed workers as they grabbed one dog after another around the neck with metal pincers and bashed them over the head with a wooden pole. Some dogs fell unconscious, while others cried out and writhed in agony.

Some still struggled to breathe after their throats had been cut and before the skin was torn from their bodies. Dogs who were next in line for slaughter wailed and barked as a worker hit them in an effort to get them to walk more slowly. One employee told the investigator that this facility bludgeons and skins 100 to 200 dogs a day. When this video was shot, there were about 300 live dogs in the compound slated for slaughter. Sign our pledge to give leather the boot!

Leave cruelty off your plate.

We’ve stood in many a slaughterhouse, in China and elsewhere, and can attest that there’s no difference between the fear and suffering of the dogs and cats who are killed at the Yulin festival and those of the countless other animals who are killed for people’s meals. The best way to stop dogs, cats, and all animals from being killed for food is to practice compassion for all living beings. Make a lifesaving decision: Please, pledge to go vegan.

All over the world, intelligent and sensitive animals are tortured and killed for food. For example, pigs are smarter than dogs, yet it’s standard practice for mother pigs to be so intensely confined that they lose their minds and for piglets to have their teeth, testicles, and part of their tails cut off without painkillers. In slaughterhouses, it’s common for chickens—social and inquisitive animals by nature—to be conscious when they’re plunged into scalding-hot water, much like the animals at the Yulin festival. In reality, the dogs and cats we cry for are no different from the pigs, cows, chickens, and other animals served on people’s plates.