Activism comes in many different forms. Sometimes it can be as simple as watching movies with friends and family members and having conversations about them afterward. Here are some short lists of films to get the people in your life on their way to helping animals!

Babe: This cute movie investigates the rights, emotions, and sensitivities of animals while questioning why humans love some animals and slaughter others. Rent it or stream from Amazon.

Charlotte’s Web: Here’s another movie that highlights what a pig has to do in order to avoid being slaughtered. Like Babe, this adaptation of E.B. White’s classic children’s novel, poses the question why humans love some animals but slaughter others. Stream it on Netflix or Amazon.

Chicken Run: Claymation chickens fight to escape from the prison-like farm where they are destined to be killed. Rent or stream it from Amazon.

Free Willy: Perhaps the best-known movie on this list, it’s about a boy fighting to free an orca from captivity. Rent it or stream from Amazon.

Legally Blonde 2: When the main character learns that the mother of her beloved Chihuahua is trapped in a cruel lab, she goes to D.C. to fight the vivisection industry. Rent it or stream from Amazon.

King Kong: One of the most famous and saddest stories about a wild animal who is taken from nature, placed in shackles, and forced to perform for human entertainment. Rent or stream one of the versions from Amazon.

Island of Lost Souls: This 1932 classic tale about animal experimentation investigates the way that nonhuman animals experience pain and suffer like us while questioning the ethics of vivisection. This movie defined a new genre in horror cinema! Rent it!

Predator and Predators: The tables are turned, and the humans become the hunted in this sci-fi franchise. Rent or stream them from Amazon.

Rise of the Planet of the Apes: This sci-fi gem looks at the horrors of vivisection, the exotic pet trade, and the suffering of wild animals in captivity. Rent it or stream from Amazon.

The Texas Chainsaw Massacre: One of the earliest and nastiest looks at eating meat in modern society, this film put humans in the slaughterhouse, and horror movies were never the same again. Rent or stream it from Amazon.

The Animals Film: This documentary presents an overview of animals who are used in factory farming, research, and entertainment as well as of the international animal rights movement.

Blackfish: This documentary made international headlines for its gripping investigation of the death of orca trainer Dawn Brancheau and SeaWorld’s systemic abuse of orcas and other marine mammals. Now, you can watch it through Netflix or Amazon.

Born to Be Wild: This inspiring film documents the lives of orphaned baby elephants and orangutans and the people who rescue, raise, and reintroduce them to the wild. Rent or stream it from Amazon.

The Cove: This Oscar-winning film investigates the annual dolphin slaughter at Taiji, Japan. Rent or stream it from Amazon.

Earthlings: Narrated by Joaquin Phoenix, this extremely moving documentary explores major industries and the ways in which they use and abuse animals. Rent it or watch it online.

Food, Inc.: This movie takes an in-depth look at America’s food production and the corporations that prioritize profits over welfare and health. It’s available through Amazon and Netflix streaming.

Forks Over Knives: This documentary examines the connection between diet and most diseases of affluence and how they can be controlled or reversed by eating a plant-based diet. Stream it through Netflix or Amazon.

I Am an Animal: Learn about Ingrid E. Newkirk and PETA’s history and struggle for animal rights! Rent or buy this!

Lolita: Slave to Entertainment: This provocative documentary investigates the sad capture and solitary life of the orca Lolita at a marine park in Miami. Rent it or watch it online.

Also check out Veganflix, a website that curates animal justice and vegan videos. 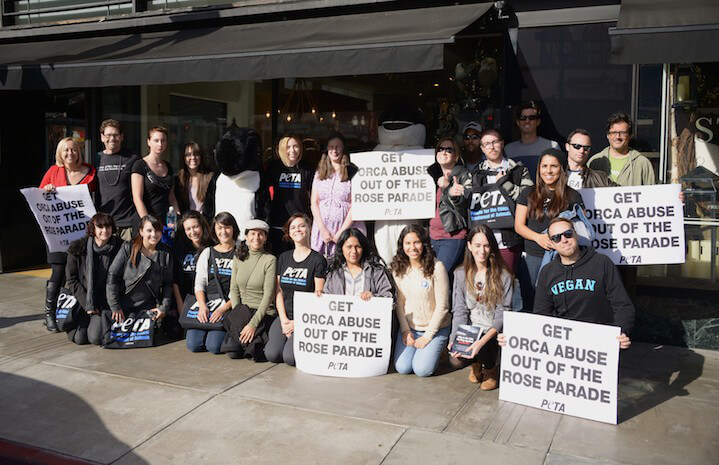 Get Active for Animals!