Hunters lured gray wolves outside the protective barrier of Yellowstone National Park using food and electronic calls. They blasted them with military-style rifles and pierced them with steel arrows. Throughout Montana and Idaho, hunters ran wolves down with snowmobiles and packs of dogs. They caught them in limb-crushing traps and snares that slammed down on their necks, slowly strangling them to death. They hunted them at night, using bright lights to disorient and blind them. They gunned down sleeping pups in their dens.

Estimates indicate that there are only 5,000 to 6,000 wolves left in the entire continental U.S. And scientists fear that since illegal kills often go unreported, the actual death toll could be twice as high. Twenty-five of those killed were from Yellowstone—about a fifth of the park’s population. The celebrated Phantom Lake pack was almost completely wiped out. 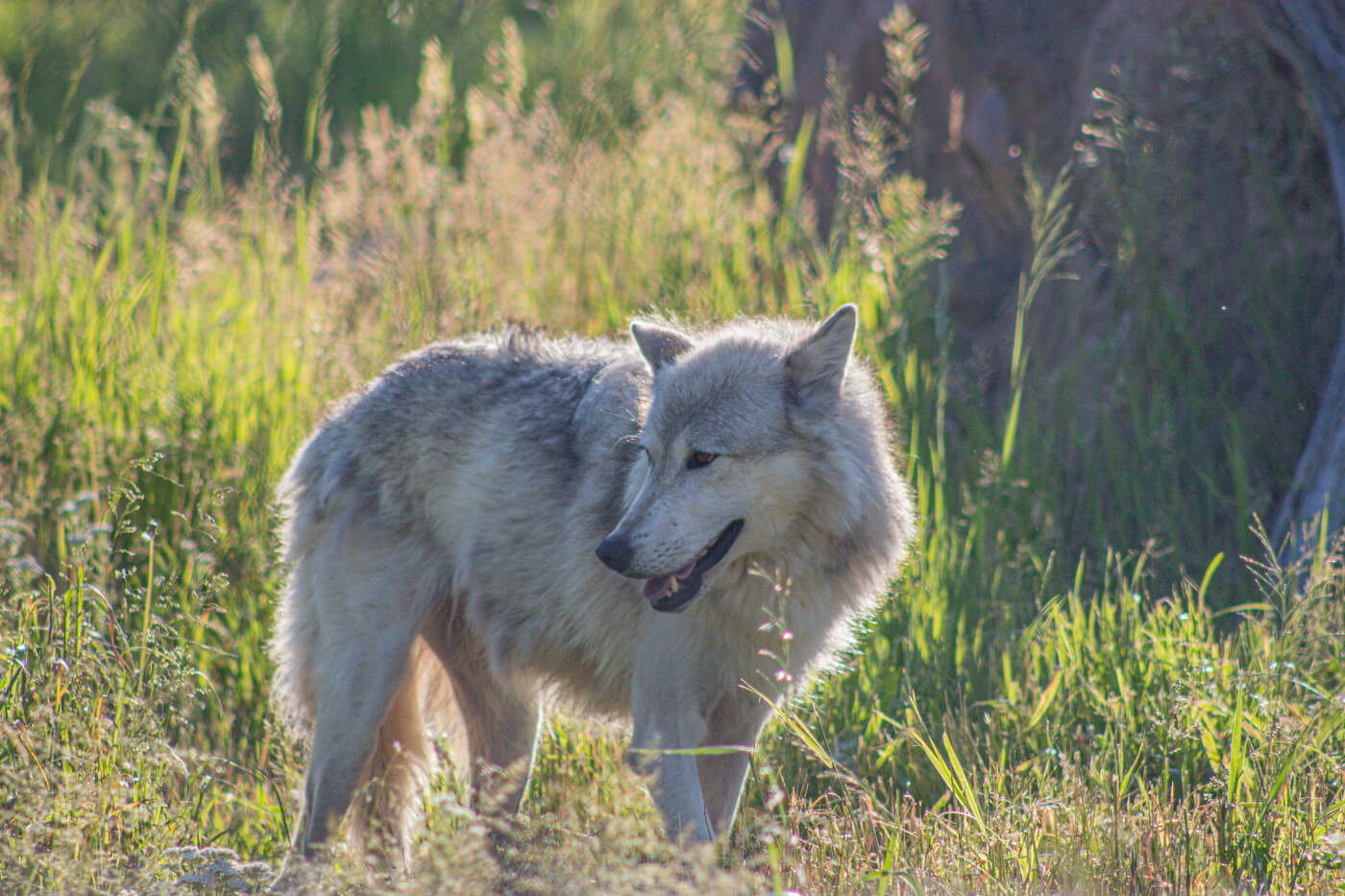 The Intercept published the findings of a monthslong investigation into the events that led up to the mass extermination. It revealed that trophy-hunting special interest groups spent big bucks to put one of their own in the Montana governor’s mansion in 2020 and stack the state’s Department of Fish, Wildlife and Parks. Under Gov. Greg Gianforte, regulations meant to protect wolves from annihilation fell like dominoes. Meanwhile, hunting, trapping, and ranching interests in Idaho helped push through measures to allow for the massacre of up to 90% of that state’s 1,500 wolves.

We saved a few elk today.

Before the Endangered Species Act (ESA) was passed in 1973, wolves had been so aggressively hunted, trapped, and poisoned that they were virtually nonexistent in the continental U.S. And they were among the first species to be given federal protection. A few years later, Northern Rocky Mountain gray wolves were delisted from the ESA. Hunters clamored for a shot at them, but advocacy groups fought back, and wolves maintained some protection under state laws from being killed in large numbers and from some of the cruelest killing methods.

Still, anti-wolf interests weren’t giving up. They accused the wolves of preying on farmed animals, even though U.S. Fish and Wildlife Service (FWS) reports indicate that only a handful of the nearly 9.6 billion land animals that humans raise for food every year are actually killed by wolves. Far more die from health issues, giving birth, weather extremes, or poisoning. Even domesticated dogs kill more farmed animals than wolves do, including 100% more cows and over 1,900% more sheep. And ranchers are reimbursed for those “financial losses.”

Hunters blamed wolves for killing elk, even while turning out in droves to kill the elk themselves. The truth, as reported by FWS, is that wolves help keep elk populations healthy by preying mainly on older females who are no longer able to reproduce. By contrast, human hunters typically target large bull elk at prime breeding age—the ones with a trophy rack of antlers. 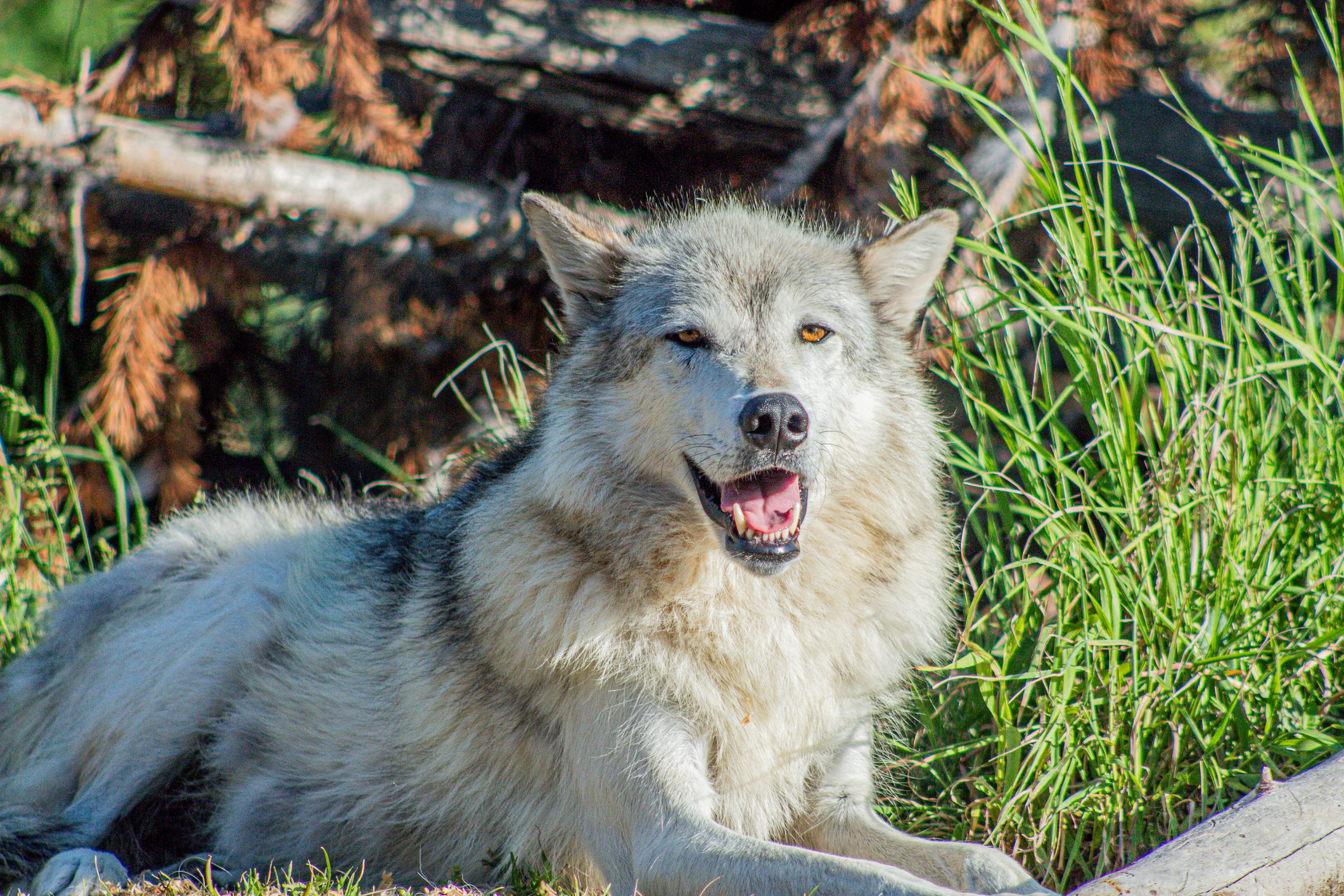 And the remains that wolves leave behind provide many other species—including ravens, foxes, coyotes, bald eagles, and bears—with food. When elk herds change their grazing patterns to avoid wolf predation, it allows for the regrowth of willow, aspen, and cottonwood trees, which make excellent food for beavers and habitat for songbirds. Wolves also help keep deer populations in check—another reason why hunters want them gone.

However, armed with false narratives about ranchers being “put out of business” and elk herds being stamped out, Montana and Idaho lawmakers declared open season on gray wolves. After the Trump administration stripped wolves in the rest of the country of their ESA protection in 2021, Wisconsin and other states followed suit, and the resulting carnage further decimated wolf populations across the U.S. Twenty-one U.S. senators, 60 conservation groups, nearly 200 tribal leaders, and more than 800 scientists implored the new Biden administration to stop the killings with an emergency order restoring wolves’ ESA protection. The administration promised a yearlong review. In February, a district court reinstated federal protection for wolves in 44 states—but the Northern Rocky Mountain wolves weren’t part of that ruling.

Montana and Idaho are already putting plans in place for another mass extermination, and wolves don’t have much time.

Since wolves mate for life, remain faithful to their partners, and live in close-knit packs in which everyone pitches in, killing even a single wolf ruins multiple lives. The devastation that would be wrought by hunters in the Northern Rockies is hard to overestimate. Please send an urgent message to Secretary of the Interior Deb Haaland asking her to implement immediate emergency protections for gray wolves and to reinstate full federal protections for them under the ESA.

Here are a few sample points that be can be used:

I was very pleased to learn that a U.S. district court recently determined that gray wolves in much of the country must once again be protected under the Endangered Species Act (ESA), ruling that the U.S. Fish & Wildlife Service failed to show that wolf populations could be sustained in the Midwest and portions of the West without protection under the ESA. However, gray wolves in the Northern Rocky Mountains—Idaho, Montana, Wyoming, and portions of several surrounding states—remain unprotected under the ESA, even though open season has been declared on them. Officials in Idaho approved measures to allow for the massacre of a shocking 90% of the state’s 1,500 gray wolves, and in Montana, new laws allow for the killing of unlimited numbers of wolves and legalized baiting, hunting bounties, and the use of snare traps—anchored wire or cable nooses that tightly constrict and slowly suffocate animals. Additionally, 20 wolves were killed after leaving the safety of Yellowstone National Park, nearly wiping out the Phantom Lake Pack and leaving only 94 wolves living in the park.

While I’m grateful that the U.S. Fish & Wildlife Service previously announced that it has begun a yearlong review to determine whether the gray wolves in the Northern Rocky Mountains should be relisted under the ESA, these animals might not have that long. Respectfully, I urge you to implement immediate emergency protections for gray wolves and to reinstate full federal protections for them under the ESA!