Update (June 7, 2022): Victory! After hearing from PETA and thousands of concerned shoppers, Walmart has cut ties with Chaokoh!

Update (May 11, 2021): Raley’s supermarkets have joined Albertsons and Target in dropping Chaokoh after hearing from PETA about monkey labor in its supply chain.

Original post
Were monkeys forced to pick coconuts for your milk?

Many kind people choose coconut milk instead of cow’s milk because they don’t want to support cruelty to animals. But a disturbing PETA Asia investigation reveals that terrified young monkeys in Thailand are kept chained, abusively trained, and forced to climb trees to pick coconuts that are used to make coconut milk, meat, flour, oil, and other products.

In 2019, PETA Asia investigators visited eight farms where monkeys are forced to pick coconuts—including those for one of Thailand’s major coconut milk producers, Chaokoh—as well as several monkey-training facilities and a coconut-picking competition. At each one, they documented that these sensitive animals were abused and exploited.

PETA Asia investigators returned in 2020 in response to claims by the coconut industry and the Thai government that monkeys were no longer being used for exported products. PETA Asia found that monkeys are still being used and that not only have Chaokoh and the Thai ambassador to the United States failed to take meaningful action to end the use of forced monkey labor, they’re also touting a misleading and inadequate audit system to lie to companies and consumers about the extent of forced monkey labor in the Thai coconut industry.

Monkeys Are Still Suffering for Coconut Milk in Thailand from Official PETA on Vimeo.

Many monkeys, typically pigtail macaques, are illegally abducted from their families and homes when they’re just babies. They’re fitted with rigid metal collars and kept chained or tethered for extended periods. 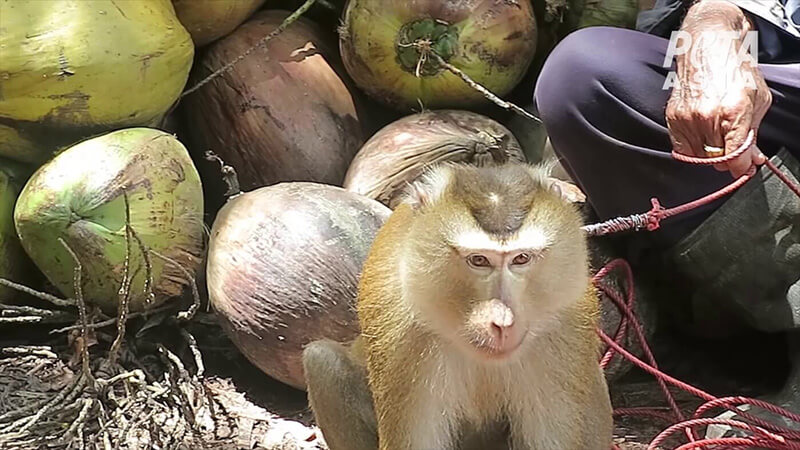 Wild pigtail macaques live in large family groups. Females stay with their families their entire lives. Mothers are highly protective of their babies, and the little ones rarely leave their mother’s side in the early weeks. While they have the ability to move silently through the tree canopies, pigtail macaques have a wide range of calls and vocalizations to communicate over large distances.

When forced to harvest coconuts, they are denied the freedom to move around, socialize with others, or do anything else that’s meaningful to them. These intelligent primates slowly lose their minds. Driven to desperation, they pace and circle endlessly on the barren, trash-strewn patches of dirt where they’re chained.

Despite having been alerted to the ugly origins of Chaokoh coconut milk, major grocery chains Woodman’s Market and Tony’s Fresh Market continue to sell these products.

This refusal to take a position against cruelty to animals stands in contrast to the decision made by more than 33,000 stores to cut ties with coconut milk brands that use coconuts picked by monkeys.

Grocery chains around the world are taking a stand. Walgreens Boots Alliance—with nearly 10,000 stores in the U.S., the U.K., and Thailand—has committed to not stocking Chaokoh products and not knowingly selling any own-brand coconut food or drink products of Thai origin.

Other coconut-growing regions—including Brazil, Colombia, and Hawaii—harvest coconuts using humane, non-animal methods such as tractor-mounted hydraulic elevators, willing human tree-climbers, rope or platform systems, or ladders, or they plant dwarf coconut trees. Studies have shown that these methods are superior to using monkeys, who can’t distinguish between ripe and unripe fruit, and the ripe coconuts get bruised when the animals drop them to the ground.

Coconut water typically comes from coconuts grown on dwarf trees, including the Nam Hom variety, so harvesting them doesn’t require monkey labor. But that doesn’t necessarily mean that monkeys won’t be used. PETA has confirmed, however, that Harmless Harvest is among the companies that don’t use monkey labor for coconut water. 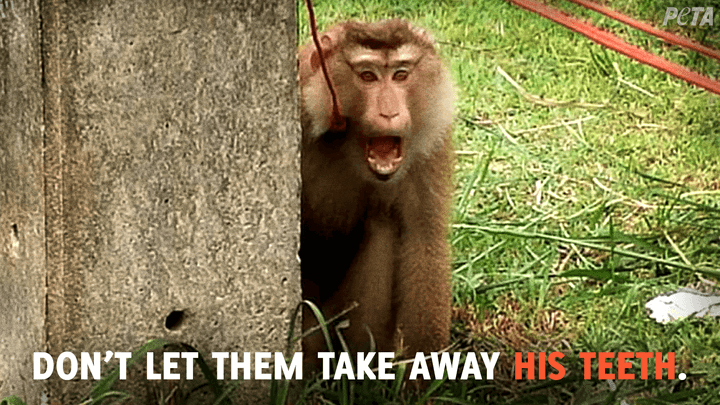 Please send polite emails to grocery chains Woodman’s Market and Tony’s Fresh Market to let them know how you feel:

Next time you shop for groceries, if you see Chaokoh coconut milk on the shelves, talk to the store’s manager and ask them to reconsider their relationship with these brands.