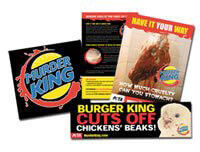 On June 28, 2001, PETA called off its Murder King campaign, which involved provocative ads; celebrity support from Alec Baldwin, James Cromwell, and Richard Pryor; and—with the help of activists—more than 800 protests at Burger King restaurants worldwide. Since the campaign ended, Burger King has continued to lead the fast-food industry toward improving animal welfare.

PETA called off its Murder King campaign when the company agreed to do the following things:

In the years following PETA’s successful Murder King campaign, PETA continued to hold behind-the-scenes discussions with Burger King about how the company could further improve its animal welfare guidelines. In March 2007, Burger King announced a groundbreaking new plan, placing it at the forefront of the fast-food industry with regard to animal welfare. The company committed to do the following things:

PETA applauds Burger King for this groundbreaking step and will continue to work with the company to improve its animal welfare requirements.