Former Veterinary Student Performed CPR on Cat for Over an Hour

Bear Lake, Utah – Courtesy of PETA, a Compassionate Action Award is on its way to Justin Bingham for reviving a freezing kitten who was found lying face down in the snow on Thanksgiving morning by a relative. “I caught him right on the edge of death,” said Bingham, a former veterinary student. “He had hypothermia. I knew I had to get him inside to warm him up and rub his tummy to pump his blood flow to get oxygen back in his body.”

Bingham performed CPR for over an hour by the warm fireplace, rubbing the kitten’s chest while his brother caught the event on camera. The kitten—now named Lazarus—was adopted by Bingham’s cousin. 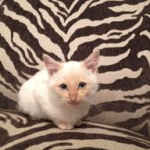 “Thanks to Mr. Bingham’s kindness and persistence, this kitten has a new chance at life,” says PETA Senior Director Colleen O’Brien. “PETA encourages caring people everywhere to take this story as inspiration to come to the aid of animals in need.”

PETA is sending Bingham a framed certificate, a box of delicious vegan cookies, and treats for Lazarus.

PETA—whose motto reads, in part, that “animals are not ours to abuse in any way”—also reminds all cat guardians that the safest place for their companions is indoors. Cats who are allowed to roam outdoors endure all weather extremes and may catch diseases such as feline AIDS, be hit by cars, or even be hurt by cruel people. All animal companions, including cats, should be escorted outdoors on a leash and a safe, secure harness.