PETA's Sign Calls for Nonviolence and Compassion for All Living Beings

Following reports that a severed pig’s head was thrown at the front door of a Philadelphia mosque, PETA is suggesting a way to promote peace for every living being—regardless of religion, nationality, or species. In a letter sent today, PETA asks for permission to place a banner adjacent to the mosque featuring images of peas arranged to represent different religious symbols—including the Muslim crescent and star, the Christian cross, the Jewish Star of David, and the Hindu Aum—next to the words “Give Peas a Chance. Go Vegan. Nonviolence Begins on Our Plates.” 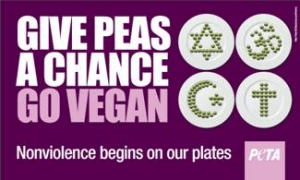 “Violence often stems from a lack of empathy for others who are perceived as different and therefore not worthy of respect. PETA hopes to get people talking about simple ways to show compassion and understanding, starting at mealtimes,” says PETA President Ingrid Newkirk. “We hope our banner will bring a message of peace and hope. If we can relate to who is on our plate, we can certainly relate to our fellow human beings.”

PETA—whose motto reads, in part, that “animals are not ours to eat”—points out that animals used for food experience joy, pain, fear, love, and grief and value their lives, just as humans do.

On behalf of People for the Ethical Treatment of Animals (PETA) and our more than 3 million members and supporters worldwide, including thousands in Pennsylvania, we are so sorry to hear of the pig’s head that was dumped at the Al-Aqsa Islamic Society mosque. As vegans, we promote understanding and respect for all others, regardless of race, religion, gender, or species, and we reject hatred in all forms.

I have a proposal that may help promote a message of peace to the Philadelphia community—and perhaps even reach those responsible for this despicable act. PETA would like to place a sign outside the Al-Aqsa Islamic Society building, which would promote understanding and compassion for all. The artwork features images of peas arranged to represent different religious symbols, including the Islamic star and crescent, the Christian cross, the Hindu Aum, and the Jewish Star of David, and the text reads, “Give Peas a Chance. Go Vegan. Nonviolence begins on our plates.”

The violence inflicted on the billions of animals who are tormented and slaughtered every year for food hinges on a simple lack of empathy for others who may appear unfamiliar and have different languages and customs—but who share with us the desire to live free of pain and fear. In today’s meat industry, chickens, lambs, and turkeys experience terror when they’re slaughtered; fish are left to suffocate on the decks of boats or cut open while they’re still alive; and calves in the dairy industry are taken from their mothers within hours of birth.

Human beings of all nationalities and religions often feel powerless in the face of all the discrimination and violence in the world, yet every time we sit down to eat, we can help stop suffering by choosing a nonviolent meal. While opting for a veggie burger or falafel instead of a chicken kebab or steak sandwich won’t create instant global peace, it will reduce the sum total of suffering and can make people think about what more is possible.

Placing PETA’s sign at the Al-Aqsa building would be a simple way to promote peace, understanding, empathy, and compassion, and it could serve as a rebuke to the hateful act committed by someone who missed some of the most basic and important lessons in life. Thank you for your consideration.