Corpus Christi, Texas – Because 11 dogs died and three had to be rescued after being left in a hot truck in Corpus Christi last summer and because similar tragedies are now on the rise nationwide, PETA has plastered an alert on an elevator in La Palmera mall and is running public service announcements (PSA) over CVS store loudspeakers warning shoppers that leaving dogs and children in hot cars can quickly turn deadly.

On a 75-degree day, the temperature inside a parked car can soar to 94 degrees in just 10 minutes, and on a 90-degree day, it can reach 109 degrees in just minutes. As the temperature climbs, dogs endure agonizing symptoms: They go into shock, vomit blood, urinate and have diarrhea, and can experience multi-organ failure, cardiopulmonary arrest, fluid buildup in the lungs, muscle tremors, seizures, unconsciousness, and, finally, death. 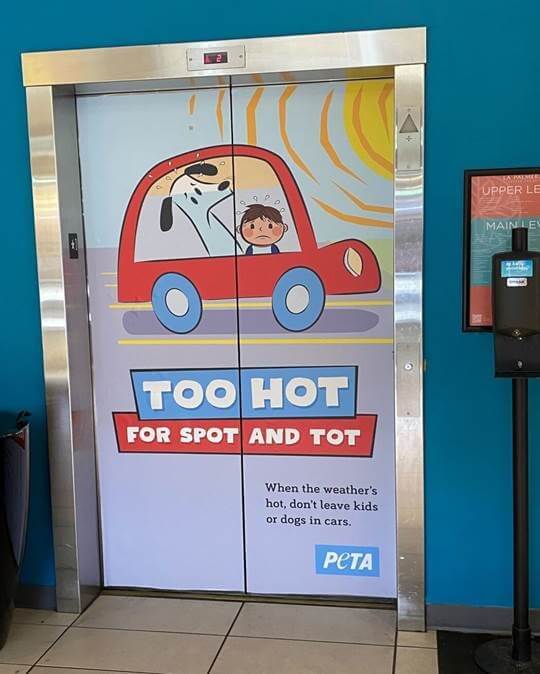 “Because temperatures in a parked car can reach triple digits within minutes, leaving a dog or a child locked inside can end in tragedy,” says PETA President Ingrid Newkirk. “PETA is reminding everyone that the safest place for our most vulnerable family members is indoors, where it’s cool.”

Already this year, 29 dogs and 12 children have died inside hot cars. In 2021, at least 59 animals died from heat-related causes, and another 145 animals were rescued from potentially deadly situations—and since these numbers include only incidents reported in the media, the actual figures are surely far higher.

Anyone who sees a dog or a child in a parked car should take immediate action: Call 911. Then write down the vehicle’s color, make, model, and license plate number and rush to have nearby stores page the owner. If the owner can’t be found and if authorities are unresponsive, do what it takes to save the individual’s life. PETA offers an emergency window-breaking hammer for help with intervening in life-or-death situations.

PETA’s elevator ad is located in La Palmera mall at 5488 S. Padre Island Dr. and all CVS locations are running PETA’s PSA. PETA—whose motto reads, in part, that “animals are not ours to abuse in any way”—opposes speciesism, a human-supremacist worldview. For more information, please visit PETA.org or follow the group on Twitter, Facebook, or Instagram.