Waseca, Minn. – “See the Individual. Go Vegan.” That’s PETA’s message on a new billboard honoring the 3,000 mother pigs and 9,000 piglets who reportedly died inside burning industrial sheds at Woodville Pork last month. The ad is up near where the fire took place. 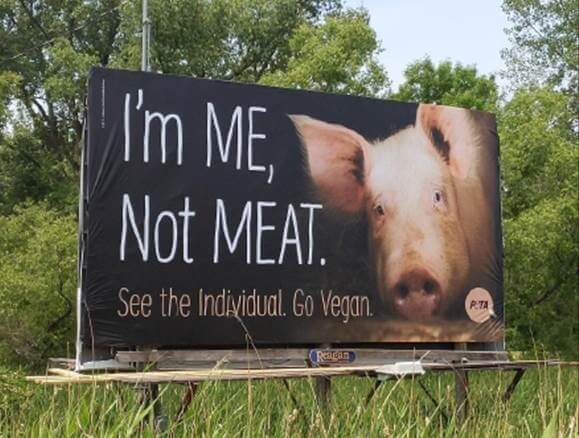 “Mother pigs and their babies don’t deserve for their throats to be slit in slaughterhouses any more than they deserve to endure agonizing deaths in a fire,” says PETA Senior Director Danielle Katz. “PETA’s billboard is an urgent reminder that kindness begins in the kitchen—we can help prevent such tragedies by eating vegan.”

Today’s meat industry squeezes mother pigs into narrow metal stalls barely larger than their bodies and keeps them almost constantly pregnant or nursing. Workers chop off pigs’ tails, cut their teeth with pliers, and castrate the males—all without any pain relief. At the slaughterhouse, workers hang them upside down—sometimes while still conscious—and bleed them to death.

The World Health Organization has confirmed that eating bacon, hot dogs, ham, and other processed meats can cause cancer. Every person who goes vegan saves the lives of nearly 200 animals each year; reduces their own risk of suffering from cancer, heart disease, diabetes, obesity, and numerous other health conditions; and helps prevent future epidemics and pandemics. Swine flu, bird flu, and COVID-19 all stemmed from confining and killing animals for food.