Albany, N.Y. – This afternoon, PETA supporters wearing horse masks descended on the Albany, New York, set of HBO’s The Gilded Age, after learning from a whistleblower that distressed horses were reportedly not being given adequate water or rest while being forced to pull carriages for long hours in scorching heat for the show. One horse even reportedly broke away from a wrangler and trampled an actor. More photos are available here. 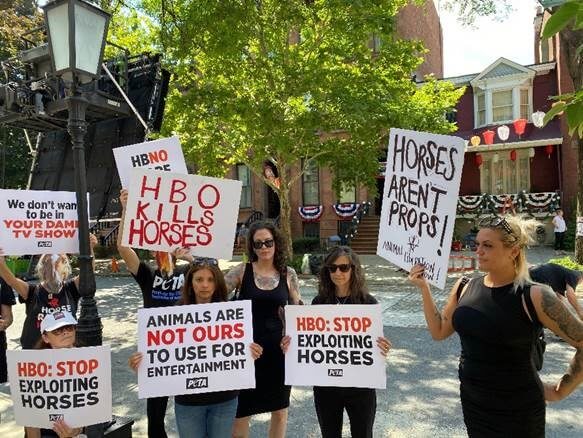 The protest came after a horse collapsed and died on The Gilded Age’s Long Island set while filming a carriage scene in June and amid renewed calls to ban horse-drawn carriages in New York City after a horse recently collapsed on a busy street.

“Whether it’s on a busy New York City street or a crowded television production set, horses suffer when they’re forced to pull buggies in all weather extremes,” says PETA Senior Vice President Lisa Lange. “PETA is calling on HBO to get with the program and ban the use of vulnerable horses in its productions.”

PETA has filed a request with the Albany Police Department for an investigation to pursue any appropriate cruelty-to-animals charges.