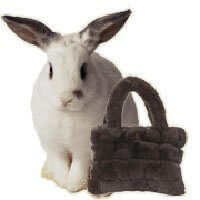 Most people shudder at the idea of wearing a coat made out of the skins of 120 dead minks, but what about fur trim? The fuzzy trim on your cardigan, the tassels on your hat, the fringe on your boots, or even your cat’s toy mouse could be made out of a sweet bunny—all the more reason not to wear any fur. Rabbit fur is often cheaper than other animals’ skins, so the fur industry is pushing accessories made from rabbit fur in an effort to seduce new customers.

More Than a Muff

Rabbits are social animals who live with their families in underground burrows called warrens. They can hop faster than a cat, a human, or even a deer can run. Rabbits love nibbling on alfalfa, timothy hay, apples, carrots, and crisp, green veggies, and they chew vigorously to trim their front teeth, which never stop growing. They communicate through body language and thump their large back feet on the ground to warn other rabbits when they are in danger. They mark their territories just as cats do—by rubbing their chins on twigs, rocks, other landmarks, and even each other.

People who have adopted rabbits from animal shelters know that they are affectionate and loyal and love to snuggle with other rabbits and their human companions. Rabbits are sensitive, smart animals with individual personalities, just like dogs and cats. They make lifelong bonds with other rabbits and humans, play with toys, and will even use a litterbox.

Like other animals farmed for their fur, rabbits—who are fastidiously clean by nature—are kept in tiny, filthy cages, surrounded by their own waste. They spend their entire miserable lives standing on thin wires, never having a chance to dig, jump, or play. The methods of slaughter are barbaric—their necks are broken or their skulls are smashed before they are strung up by their hind legs and their heads are cut off.

Asian markets also routinely slaughter dogs and cats for sale as “rabbit fur.” Because of the rampant false labeling of Asian-produced fur, it is impossible to know exactly what kind of animal skin you are wearing if you buy fur.

With so many high-quality alternatives available, compassionate consumers and animal-friendly fashionistas are sparing bunnies and shunning skins by choosing soft acrylics, brushed cotton, and faux fur instead.

No federal law protects animals on fur farms, but you can help them simply by refusing to buy or wear fur trim.

Top retailers including Gap, Abercrombie & Fitch, Forever 21, and American Eagle have responded to consumer concerns and refuse to sell rabbit fur. Unfortunately, other retailers—and customers—haven’t realized that there is cruelty in every cuff and collar, so the bunnies need your help!