It Pays to Be Vegan 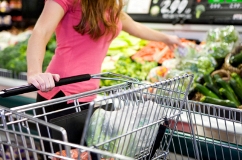 It’s a great time to be vegan. Not only are we saving animals, the environment, and our own lives by eating healthy, nutritious plant-based foods, in general, we’re also saving money at the supermarket.

The prices of meat, milk, cheese, and eggs are rising steadily because of the skyrocketing costs of animal feed. For example, Smithfield Foods, the world’s largest pork producer, says its hog-raising costs have increased by more than 20 percent in the past year, largely because of the high cost of pig feed. Meat-eaters can expect to foot the bill by paying higher pork prices.

Why spend your life’s savings on animal products when you can eat healthy, humane, and inexpensive vegan foods? Some of the most versatile vegan foods—including beans, rice, vegetables, tofu, and pasta—cost relatively little compared to animal products. According to a 2007 MSN MoneyCentral article, the cheapest cuts of beef, such as ground round, average $3 per pound; boneless chicken breasts cost $3.40 per pound; and canned tuna costs around $2 per pound. In comparison, dried beans and lentils cost less than $1 per pound, and rice is cheaper than $1 per pound. Tofu usually costs less than $2 per pound. Even vegans who buy costlier products like soy sausage and nondairy ice cream can still spend less than people who load up on beef, chicken, and fish.

Funneling Food Through Farmed Animals: Wastefulness at Its Worst

Farmed animals are fed more than 70 percent of the grains grown in the U.S. It takes 4.5 pounds of grain to make 1 pound of chicken meat and 7.3 pounds of grain to produce 1 pound of pork. Approximately 700 calories worth of feed are needed to produce just one 100-calorie piece of beef. It is more efficient and economical to eat grains and soybeans—and all the foods that can be made from them—directly rather then feeding them to farmed animals so that we can eat those animals. Around 1.4 billion people could be fed with the grain and soybeans fed to U.S. cattle alone. A 2002 E Magazine article estimated that the amount of feed needed to produce just one 8-ounce steak would fill 45 to 50 bowls with cooked cereal grains.

Vegans Save Money and Lives

Everyone makes different food choices, so there’s no guarantee that you’ll save big if you buy vegan foods, but wholesome plant foods are fairly cost-effective. If you factor in all the money you save on hospital bills, medications, and weight-loss plans by avoiding unhealthy, artery-clogging animal products, you’ll see why a vegan diet is downright economical. Of course, the most important savings of all can’t be put in a bank—each vegan saves more than 100 animals every year! If you haven’t already gone vegan, why not order a free copy of PETA’s “Vegetarian Starter Kit” right now?