Why I Didn’t Rescue the Fawn 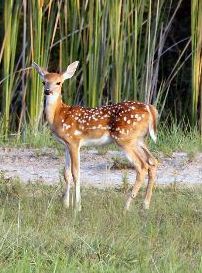 It was clear that he wanted my help. He was the cutest baby I had ever seen, covered with white spots, mewing a soft call as he walked toward me with pleading eyes looking straight into mine, ears perked forward inquisitively. I had never heard that plaintive sound before—and I’ve spent plenty of time watching deer. But here he was, giving me a decision to make.

Should I rescue this poor animal, make friends and be one with nature, save an innocent fellow being in need? Or turn a cold shoulder and walk on by?

If you’re ever faced with an animal rescue situation and local officials won’t help, please know that PETA’s Emergency Response Team is on call 24/7 at 757-622-7382, option 2. I’ve stored that number in my cell phone. But first, it’s good to know the basics on how to handle an emergency.

I have a lot of wildlife around my home, since I treat my yard as a sanctuary and do what I can to live in harmony with nature.

Usually, my wild friends need no help from me, even when it is heartbreaking to watch. Hawks claim an occasional bird or rabbit whom I counted as part of the family. Not every baby bird fledges the nest, not every squirrel or rabbit survives the winter, not every wren finds a mate. The seasons of life come and go with or without me. But there are situations when wild animals do need our help, especially when the creatures are traumatized or injured by human activity. We must try to help animals who have been injured by cars, electric lines, window strikes, and so on.

Feeding wildlife is harmful because it inspires animals to stay in areas that are dangerous to them, or that wouldn’t normally support/sustain them. Artificial food sources will also cause animals to breed at an accelerated rate, meaning more birds, raccoon,  and deer. The more animals you have in a small area, the more likely they will be perceived as overpopulated or as a nuisance, especially when the birds nest on eaves and raccoons chew on buildings. Animal cruelty can result. Most cases of animal abuse (involving wildlife) happen because kind-hearted people lure the animals into danger by feeding them.

The fawn who recently approached me in the woods enjoyed a happy outcome. He walked up to me, intent on closing the distance between us as he mewed and looked me in the eye. It was then that I spotted his mother about 30 feet away, staring at me, ready to bolt, fearing the worst. Our fawn was just plain confused: I was not the parent he was seeking. Perhaps the oncoming thunderstorm had something to do with it. In any case, I would hardly be doing him a favor by being his friend—a lesson that could be deadly when hunting season rolls around. He’d be far better off not trusting people in general. So I clapped my hands, stomped my feet, growled at him, and made a hasty retreat to break off this relationship before it even started. From a distance, I watched through binoculars as mother and child reunited. A doe stays with her fawn for a year or so and will often leave to forage for food. People sometimes mistakenly think the young have been abandoned when, in fact, mom knows exactly where her child is. “Rescuing” babies while mom is healthy and feeding causes far more harm than good. I backed off, wished this pair well, and hoped that they would enjoy their lives together for many more summer days. 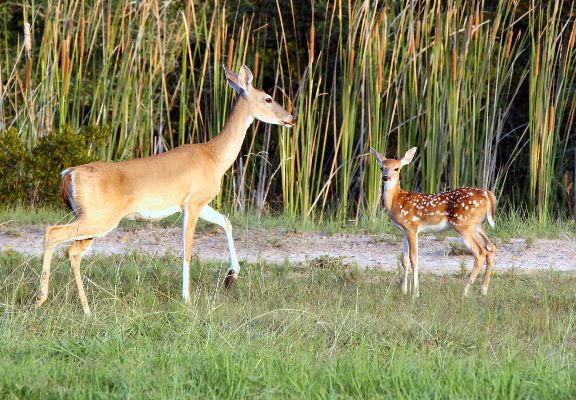 The experience for me was uplifting. To share that intimacy with such beautiful animals was something special. An omen, perhaps?