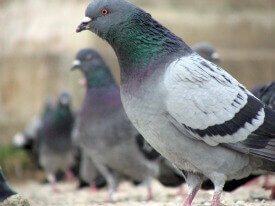 I remember that the relatives of two animal hoarders who faced cruelty charges told the media that the hoarders “loved animals and would never do anything to hurt them.” The animal shelter where I was working had just seized more than 20 terrified starving cats and more than a dozen dogs from these hoarders. One dog was chained out back surrounded by broken bottles near his rickety doghouse. The other dogs had endured “living” in about six inches of feces and urine-soaked dirt, with the stench from the decaying bodies of several animals who’d been left to die. During court proceedings, the two hoarders stated that they only had money for food, not veterinary care, and that they couldn’t bear to send the animals to an animal shelter.

These two folks started off feeding cats and then developed a compulsive behavior that ended up causing enormous animal suffering. There are other groups of secretive compulsive feeders who are also causing suffering and death to animals. Pigeons and feral cats are the victims of people who share many of the same psychological characteristics and behaviors of hoarders.

The Pigeon Control Advisory Service (PiCAS)—like PETA—promotes humane pigeon control. Our biologist and anti-cruelty caseworkers routinely advise apartment complexes, cities, universities, and other groups on alternatives to cruel poisons such as Avitrol or hired contractors who shoot pigeons. A key to effective long-term pigeon control is to modify the behavior of people who feed pigeons. Recommendations from PiCAS have ended cruel pest-control programs in numerous European cities and led to dramatic reductions in the numbers of pigeons. Guy Merchant, the founder of PiCAS, stated on page 145 of Andrew Blechman’s fascinating book Pigeons, The Fascinating Saga of the World’s Most Revered and Reviled Bird, that a “small number of persistent and deliberate feeders are wholly responsible for the pigeon problem throughout the world. … Pigeons overbreed when people overfeed.” Blechman notes that Guy recognizes that “compulsive feeders view themselves as charitable” but that he “thinks them selfish. It’s not enough to simply feed the pigeons ….”

Doesn’t Guy’s description of the pigeon feeders sound like the description of the hoarders I mentioned earlier? There are people who buy heavy bags of bird seed and walk around New York City, London, and other cities dropping huge piles of it on to public sidewalks and in parks. Naturally, pigeons flock there to eat, and then breed. These people think they are helping, but in reality, they are doing more harm than good.

Similarly, there are compulsive feeders who take 25 pound bags of cat food and drive around their city, furtively dumping mounds of chow behind dumpsters, at abandoned houses, and in dark alleys. They insist, like the pigeon feeders and the hoarders, that they are acting kindly. But their feeding habit is actually resulting in larger feral litters of homeless kittens, thereby exacerbating the suffering. I’ve had these feeders scream at me that they can’t afford a $10 spay or neuter surgery because they spend hundreds of dollars a week on food!

Have you ever considered asking your local park or city to put up signs discouraging the feeding of pigeons? Have you supported or opposed a local ordinance that would establish mandatory guidelines for feral cat colony management? Can we-who care about and advocate for animals-stop letting irrational impulses dictate our actions toward them?