What bleeds beet juice, has 20 grams of protein, and can satiate any meat-eater’s appetite? The answer (coming after some friendly suggestions from PETA) is TGI Fridays’ new vegan menu item: The Beyond Burger.

The famous vegan burger  will roll out to more than 465 locations nationwide starting in January. That’s huge! You can opt for The Beyond Burger patty with any of TGI Fridays’ existing burger options—just be sure to get only dairy-free sauces and skip the cheese.

“We tested many concepts and The Beyond Burger was far and away the favorite plant-based burger among both our guests and chefs, making it the ideal addition to our popular Burger Bar.” 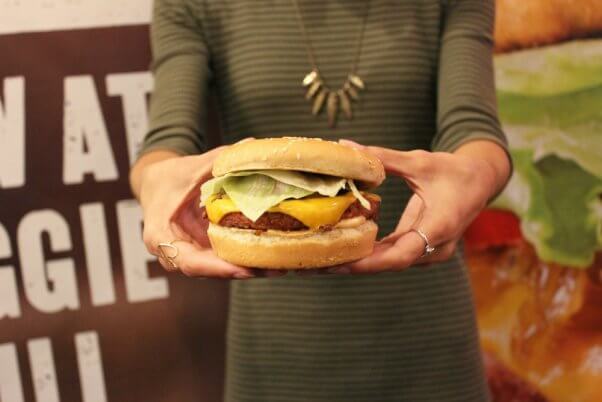 And that’s not all …

You know by now that the meat and dairy industries are inherently cruel to animals and are currently wreaking havoc on our environment and health. So it only makes sense that more and more popular chain restaurants are adding vegan menu items. The progress over the past few years has been astounding, and TGI Fridays’ vegan options are just one example.

Check out the many delicious vegan options that you can enjoy at TGI Fridays:

Have you been thinking about going vegan but not yet made the switch? Our free vegan starter kit is just what you need to get going. Already vegan? Order one for a friend!

I want a free Vegan Starter Kit!
Order a free VSK for a friend!