These Jewish Delis Have ‘Lox’ of Delicious Vegan Options

Jewish delis are staple establishments in many cities, and now, vegan Jewish chefs are stepping up to make traditional dishes using ingredients that are kinder to animals. From fresh bagels with vegan schmears and fish-free lox to Reuben sandwiches made with seitan or tempeh, it’s now easier than ever to get your favorites with the rise of vegan Jewish delis nationwide. Historic establishments are even expanding their menus, adding vegan options to cater to compassionate customers. Here are some places that are offering animal-friendly fare:

With two locations in Portland and one in San Diego, Ben & Esther’s offers all the classic fare, like freshly baked bagels, babka, and challah. It even makes its own fish-free lox and whitefish in-house, available by the pound. And don’t forget to pick up some hamentashen for Purim or noodle kugel for Hanukkah. Seriously—this place has everything.

Grass Fed is a Kosher-certified vegan butcher shop founded by Rob and Nora Rubel. It specializes in plant-based meats such as pastrami, roast beef, and chopped liver. The shop also offers freshly made sandwiches, hamantaschen, pizza, and more.

Owner Megan Tucker started Mort and Betty’s as a way to honor her traditions and culture while making them more animal-friendly. She serves delicious Jewish staples, like matzo ball soup, latkes, babka, and more, all using locally sourced ingredients as much as possible. Mort and Betty’s has weekly pop-ups on Saturdays at Crafted Kitchen and Sundays at Smorgasburg LA.

As the world’s first vegan Jewish deli, Sam & Gertie’s set the standard. It serves all the traditional favorites with an animal-free twist: chopped liver, smoked whitefish, potato knishes, corned beef, and so much more.

While not strictly a Jewish deli, this bakery serves many things you’d typically find at one, like its golden braided challah bread.

A post shared by Toluca Bakery and Cafe (@tolucabakery)

For a more modern twist on deli fare, try Larder, where chefs are experimenting with locally sourced veggies to create delicious vegan dishes. Vegan options are always available, but the menu changes frequently, so call ahead for the latest offerings. Previous specials have included a Vegan Fried Bologna Sandwich and a mushroom-based Vegan Pastrami Sandwich.

A post shared by Larder: A Curated Deli& Bakery (@larderdb)

Proper Bagel brings a taste of New York City to the South. It offers two types of vegan cream cheese (scallion and cinnamon hazelnut), a housemade vegan veggie burger, and other rotating specials.

At Rye Society, you have to try the Vegan Reuben, made with house smoked fried tofu, nondairy cheese, vegan Russian dressing, and griddled rye bread.

At Saul’s, you can find classic bagels with vegan cream cheese, along with Middle Eastern–inspired dishes like pita sandwiches with falafel or yuba (tofu skins). It also serves a Mushroom Reuben, which can be made vegan by asking for no Swiss cheese and no Russian dressing.

Vegan options at Zingerman’s include the Soy Vey! sandwich, which comes with tempeh, barbecue sauce, mustard, red onions, and pickles on toasted bread. The deli also has a vegetarian hash that can be made vegan by requesting no sour cream and no butter on the toast.

If you aren’t near any of these spots, don’t worry—it’s easy to find or make your favorite Jewish deli staples at home. 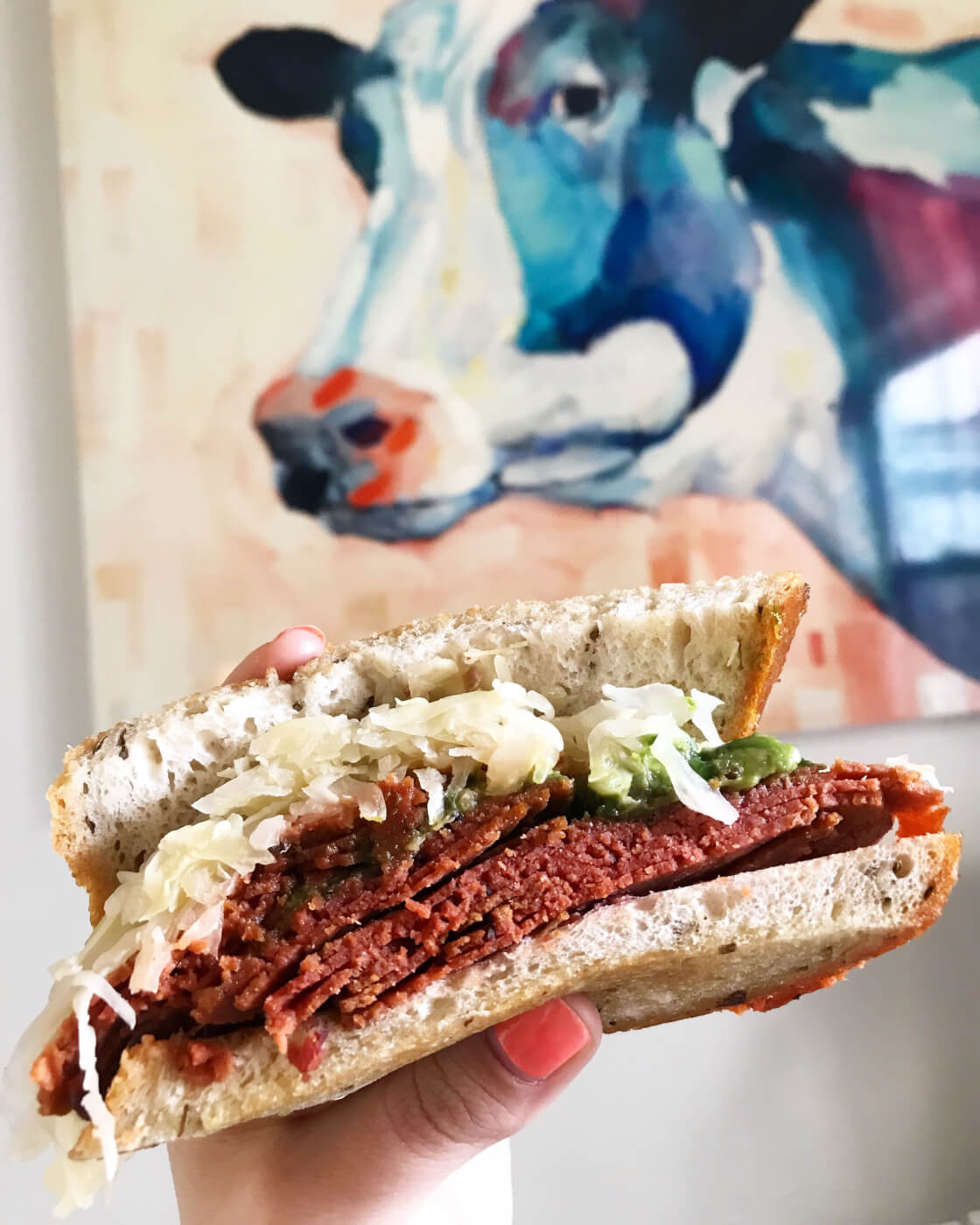 A post shared by Liz | Vegan in Melbourne 📍 (@vegandiaries___)

Vegan challah: Order some vegan challah bread to be shipped to your home, or make it yourself with this recipe from Make It Dairy Free.

Vegan babka: There’s nothing like a layered chocolate babka—make it at home with this recipe from Post Punk Kitchen, or order one for delivery.

Going vegan is the best thing you can do for animals, the planet, and your personal health. Make the change by taking our 3-Week Vegan Challenge and ordering a free vegan starter kit: