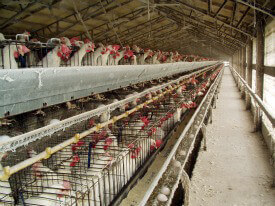 “But what’s wrong with using animals as long as they are treated humanely?” How many times have you heard someone ask this question? Most people agree on the value of humane treatment, but using animals inevitably leads to abusing animals.

Let’s look at animals used for food. Nearly all animals raised for food in the U.S. live on factory farms. There’s a simple reason for this: It’s cheaper. More animals can be raised per dollar on an industrial farm than on a small farm, where each animal gets outdoor access and individual care. Sure, many animals sicken and die from the crowded and filthy conditions on factory farms, but it’s still far more cost effective for meat, egg, and dairy producers to raise animals this way.

Think about it from the farmer’s perspective. If your competitor is producing pig or chicken meat in huge warehouses of closely confined animals, his costs will be lower than your costs to raise those same animals in more humane conditions. Even if you genuinely care about the animals on your farm, you still have to pay your mortgage and put food on your family’s table. You can reject the confinement system in favor of something better for the animals—and you might be able to charge a premium for the resulting meat, dairy products, or eggs—but where will you draw the line? If you produce eggs or dairy products, what will you do with the male offspring of your hens or cows? They’re useless to you as replacement animals, and their value as meat animals is low since they haven’t been bred for that purpose. Can you afford to give all these male animals a lifetime of easy living on your farm? Can you pay for their food and veterinary care even though they generate no income for you? Even “humane” farmers won’t do this because the cost is prohibitive.

Cattle raised for their flesh are usually castrated and branded. Pigs are also castrated and often have their ears mutilated for identification. As a “humane” farmer, you can ignore common ranching practice and provide your animals with pain relief for these procedures. But you’ll be competing with others who aren’t spending those dollars, which will come straight out of your profits. And remember that even “humanely” raised animals must endure the same horrors during their transport and slaughter as their factory-farmed cousins.

Here’s another point for a “humane” farmer to consider. Most modern breeds of chickens, turkeys, pigs, and cows used for dairy products are genetically engineered for maximum production. That leads to all kinds of health problems—including heart disease, infections, and bone fractures—caused by their rapid growth and abnormally large size. These animals must be killed at a young age or face crippling disabilities as they get too large. Farmers can choose so-called “heritage” breeds of animals with less-altered genetics, but they will get less “product” out of each animal. And they still must kill them at a young age for maximum profit—after all, animal feed is expensive! Farmers can eliminate some abuses, but if they’re in business to make money, they must make trade-offs that are not in their animals’ best interests.

What about using animals as experimental subjects in a laboratory? Conditions in labs are inherently stressful and frightening for animals, and the experiments themselves are often painful or lethal. Pain relief may not be used if there’s a risk of its altering the experimental data. While some labs claim to follow animal-care protocols, a few “enrichment” toys in a monkey’s barren cage are no substitute for the community of family and friends that he or she would enjoy in a natural environment. As with animals raised for food, animals used in labs suffer greatly no matter how “humane” the policies of the individual lab. And using animals to study human diseases is not even good science.

What about companion animals? Can’t we use dogs and cats for companionship without its leading to abuse? Our track record isn’t very good here either. How many dog and cat breeders offer lifelong care to the animals they breed who don’t fit a customer’s standards or who are unable to find loving, permanent homes? While some may, market economics will ensure that they are always in the minority. Their competitors are puppy mills and “backyard breeders,” cranking out “pedigree” animals at the lowest possible cost. Dog and cat breeders, no matter how well-intentioned, contribute to our dog and cat overpopulation problem and ensure that many unwanted animals will be euthanized in severely crowded animal shelters.

There is no humane way to use an animal. When people’s goals conflict with animals’ needs, the animals are the losers. Reducing costs and increasing profits are powerful motivators even for the best-intentioned animal custodians. The question of use and abuse goes away only when we put the needs of animals first by advocating for a world in which animals are allowed to live for their own purposes.