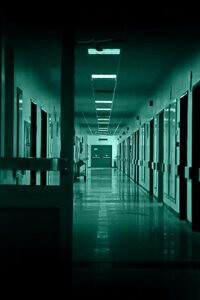 The following article was written by Carissa Leventis-Cox of Mama in the Kitchen, and she ain’t cookin’!

What’s wrong with animal-based foods? Well, if you’ve seen the recent documentary Forks Over Knives, you know that the message from highly respected doctors is clear and simple:

And yet there is a very obvious disconnect between the research and the food that many medical institutions serve their patients. Would you give an alcoholic a bottle of wine? Would you tempt someone who just quit smoking with a cigarette? Then why do hospitals serve their patients, who are struggling for health and possibly life itself, animal products—the very foods that have been shown to cause many diseases in the first place?

A few weeks ago, someone very close to my heart had surgery to remove cancer cells from her lung. While I was undoubtedly saddened by the news, I was appalled by what kind of food was served to her at a highly reputable hospital. Her very first meal was breakfast: oatmeal (the healthiest choice on the tray), French toast (dairy and eggs), two pieces of greasy bacon (after lung cancer surgery … really?!), and canned fruit. Lunch was turkey and gravy with mashed potatoes (dairy again), green beans (on the side), and grapes (at least!). Dinner was beef stew and broccoli (on the side). For snacks, family and friends were offered ice cream, which was full of artificial ingredients, except for the first ingredient: cow’s milk.

The total ignorance revealed by the choices offered by the hospital’s food service is appalling but not really surprising. I remind myself that this is how many people eat. This is considered normal food. But it is wrong on so many levels, especially in a hospital. While many of us are unable to make drastic changes to hospital food services, we can make our choices known: Take better food to your loved ones in the hospital, and ask the hospital staff for vegan options!