Eggs-tracting Cruelty From Your Diet: Here’s How 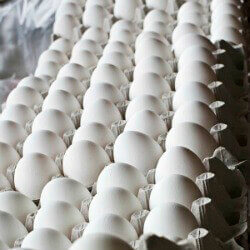 The following article was written by Megan Bedard.

In June of 2012, news surfaced about the fact that hens who laid the eggs of one of the biggest foodborne illness outbreaks in history had been sick with salmonella four months before the outbreak occurred—and the farm owners knew it.

With cramped and filthy conditions on factory farms, the finding is no surprise, but that doesn’t make it any more palatable.

There are other health risks associated with eggs in addition to foodborne illnesses: Think high cholesterol. A 2010 study by Canadian researchers found that a single egg has three times the cholesterol of a McDonald’s Big Mac. Researchers said that an egg yolk is “one of the worst diet offenders for people at risk for heart disease.”

But there’s good news! A very simple fix exists to reduce salmonella poisoning and cut out unnatural cholesterol: Stop eating eggs entirely. Here are a few ways to remove cruelty and egg-specific salmonella and cholesterol from your diet:

Sometimes, you can simply leave an egg out of a recipe. When that’s not possible, try PETA’s suggestions for replacements, such as a banana, tofu, or a commercial egg replacer.

Or try any of the many naturally egg-free recipes. Search our vegan recipe database to get started.

The more you know, the less you’ll be able to stomach the idea of eating the potential offspring of a hen. Read up on the egg industry.

Got any other ideas to end the cruelty of the egg industry? Share them in the comments section.