How to Eat Vegan at Sports Stadiums Across the Nation

Nothing beats watching your favorite team take home the W, except perhaps for watching a win while you dine on heavenly animal-friendly fare. Maybe your favorite sport is baseball or football or hockey or soccer or basketball (or all of them!)—regardless, there are plenty of vegan options at every stadium. Depending on which venue you’re visiting, you very well may be eating vegan cheesesteak, vegetable sushi, black-bean burgers, veggie dogs, nachos, or other items while watching your favorite players score!

PETA ranks the top vegetarian-friendly MLB and NFL stadiums, but even if your team’s home didn’t make the list, here’s a guide to ordering at any stadium:

There’s nothing quite like eating a veggie dog while watching the game. It’s the quintessential one-handed food, leaving your other hand open to wave your team’s flag. Nearly all MLB stadiums across the U.S. offer veggie dogs. Check out Veggie Happy to see if you can order one while rooting for your favorite team. 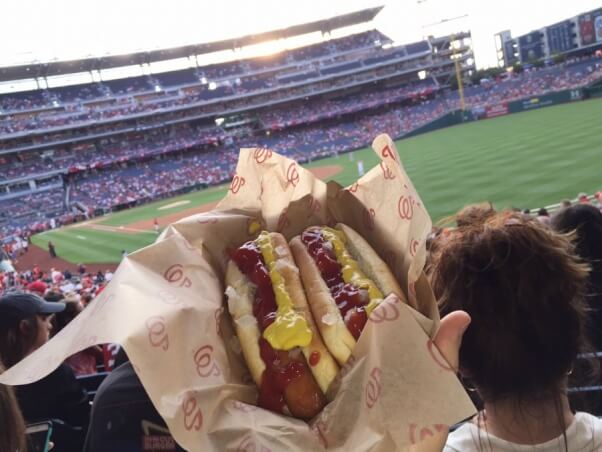 What could be better than a delicious vegan patty between a yummy bun, topped with everything from pickles to mustard? Check your stadium’s menu for veggie burgers. Several sports concession stands offer these vegan classics, ranging from black-bean patties to Field Roast Hand-Formed Burgers. Be sure to ask for no cheese (or vegan cheese), and check that the bun is vegan, too.

Tortillas + beans + rice + veggies can be found at a venue near you. Many sports stadiums across the nation offer burritos, tacos, and chips or nachos. Typically, these can easily be ordered vegan—just double-check that the rice and beans are animal-free and nix any cheese or sour cream. Ask for extra guacamole if you like things creamy. If you’re lucky enough to be in Los Angeles, definitely order these vegan nachos from Dodger Stadium!

Go the healthy route while cheering on your home team by ordering a salad. Although these light, leafy meals might not be the first thing that comes to mind when you think of tailgating food, they’re delicious and satisfying and will give you the energy to keep clapping and chanting into the ninth inning or fourth quarter.

Join the #vegandodgersquad! #Its Time for more #veganoptionseverywhere including our sports venues. From the Very top corner of the reserve level, top of the park, all the way down to home plate, we will explore for all us @vegandodgers and report back to you here. #ITStimeforHealthyOptions

An American staple—and almost always vegan—a pretzel is a yummy animal-friendly option for compassionate sports fans. They’re offered at most venues—just be sure to hold the cheese.

You can also check out Veggie Happy, which details the vegetarian and vegan options at MLB and NFL stadiums, before heading to your next game.