In Black communities around the world, plant-based eating has been a part of traditions and cultures for centuries. Today, awareness of animal suffering, concerns for human health, and environmental issues are inspiring a new generation of Black leaders in the food industry to create real positive changes for animals, customers, and the planet.

Check out these Black-owned vegan restaurants, which prove that being vegan is not a “white thing”:

The story of this restaurant is powerful. The children of its founder, chef Azla, chose a plant-based lifestyle over a decade ago, and she decided to begin modifying traditional recipes to please them, without sacrificing flavor or heartiness.

Cafe Organix is owned by NBA legend, proud vegan, and PETA pal John Salley, who says his restaurant is all about “well-seasoned and tasty vegan cuisine.” It will also carry frozen packaged goods, teas, and other delicious vegan products and will host regular community events.

Today PETA was at the grand opening of Café Organix in #SanBernardino. The 100% vegan café is co-owned by four-time NBA champion, #vegan, and TV host @thejohnsalley.

Find everything from coffee and cinnamon rolls to tacos, Beyond Burgers, and more! pic.twitter.com/ncmrSmWoqx

This vegan soul food pop-up and kitchen serves classics such as gumbo, mac and cheese, and fried “chicken” with sides of collard greens, baked beans, and cornbread.

Healthy, raw, and vegan cuisine, smoothies, and juices are the focus of this Outer Sunset café.

This Chicago-based eatery made its way to the West Coast with the help of co-owner and vegan influencer Tabitha Brown. PETA chose Brown as our 2020 Person of the Year for her efforts to inspire others to live compassionately by going vegan. Swing by for a loaded vegan brunch, crispy empanadas, healthful kale salads, and so much more.

Lettuce Feast is a Los Angeles–based food truck serving vegan fried chicken sandwiches and tenders that are beyond compare.

Plant-based burgers, loaded waffle fries, and vegan mozzarella sticks are just a few things you can find at the Planet Vegan food truck.

After having owned a traditional Ethiopian restaurant, chef Rahel Woldmedhin made the decision to open a new establishment that offers her native cuisine with an all-vegan menu. Since going vegan, she has experienced renewed energy and improved health.

Fresh, natural, and 95 percent organic, this Los Angeles–area restaurant has been perfecting home-cooked vegan cuisine for over 15 years in an effort to promote health through better eating.

Veg on the Edge (Santa Cruz)

NuVegan’s mission is to “expose your taste buds to the undeniably refreshing and delicious nature of eating natural. Things that are made for the soul should not only nurture, but satisfy the soul.” Delicious dishes include Vegan Fried Steak, the Vegan Fish Sandwich, and Vegan Barbecue Roast with Rice, and it also offers a full brunch menu. Celebrities such as Smokey Robinson (below) and Common are often dropping in to dine. 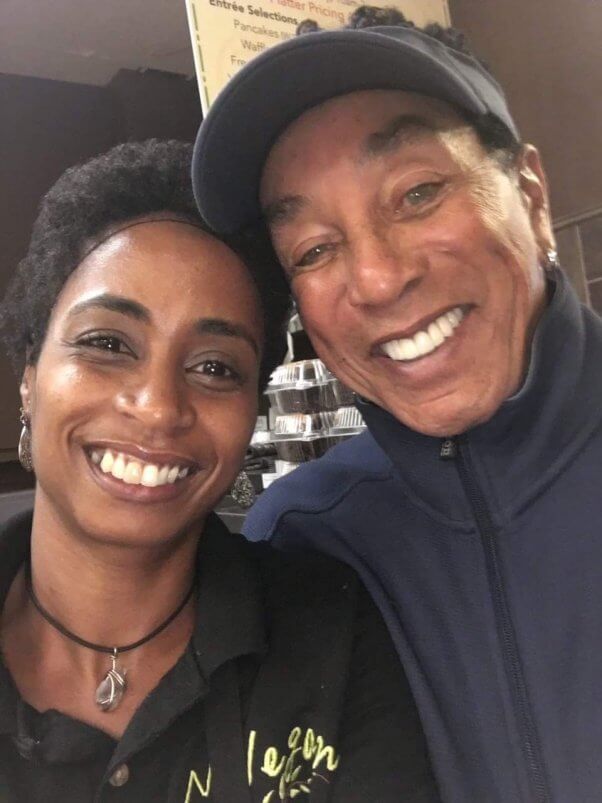 “You think smart, when you eat smart” is this restaurant’s motto, and if there’s one thing that we know, it’s that going vegan is super-smart.

This restaurant serves Jamaican meals and juices in a casual dining space.

This Caribbean-inspired restaurant serves up burgers, sandwiches, pizza, and so much more.

The goal of Life Bistro is to introduce vegan food to nonvegans by creating versions of classic American comfort food.

This restaurant’s website says, “We believe that our food is our medicine and we make it our heartfelt commitment never to compromise the quality of our food. Let Lov’n It Live take you to a world where good food is actually good for you! Come to visit us and experience our delicious, organic, living cuisine.”

Feast your eyes on this plate of barbecued cauliflower, mac ‘n’ cheese, and collard greens from this restaurant:

Vegan burgers, hoagies, nachos, and other comfort food favorites make up the menu at Can’t Believe It’s Not Meat.

Majani means “green” in Swahili, which is appropriate for this South Shore vegan restaurant that uses fresh ingredients from local urban gardens and farms.

Moon Meals specializes in lunch and late night deliveries of at least 10 meals. Prepared meals are also sold in the “grab and go” section of select stores in the Chicago area.

For the past 30 years, this vegan restaurant has won the praise and consistent patronage of vegetarians and nonvegetarians alike.

The Land of Kush (Baltimore)

The Land of Kush provides for any diner looking for delicious, healthy food. Its website promises, “You won’t believe it’s veggie!”—and with one look at its Facebook photos, we believe it.

Despite its name, this restaurant is vegan—take one look at its colorful plates of whole, nutritious foods and you’ll be a convert.

This soul food restaurant, which CNN called “the shiniest rising star in the vegan world,” has two locations in the Detroit area. Popular dishes include the Seitan Pepper Steak, the “Catfish” Tofu, and the Smothered Tempeh.

Vegan vs Fries (Detroit and other U.S. cities)

This delivery-only vegan chain can be found in Detroit and several other cities across the U.S. It’s known for French fries loaded with toppings, including vegan carne asada and secret sauces.

Trio prides itself on being Minnesota’s first Black-owned vegan restaurant. Owner Louis Hunter opened it after spending two years in prison for protesting the death of his cousin Philando Castile.

The owners of this café believe that a plant-based lifestyle detoxifies your body and spirit. We can’t say that we disagree. It offers many juice and smoothie options, along with Fried Zucchini Patties, Fried Mushrooms Nuggets, Mushroom Pie, and so much more.

Founder Laiquan Harvey-Davis opened her Jersey City bakery with the help of her two sons. After she went vegan, she modified her classic desserts to be dairy- and egg-free. In addition to vegan cheesecakes, brownies, ice cream cakes, and other sweet treats, How Delish HD offers a small deli menu.

Uptown Veg serves vegan mac and cheese, collard greens, and other healthy kinds of soul food along with fresh juices.

Just like the city it’s in, Urban Vegan Kitchen offers food from a variety of cultural backgrounds. Here, you can start your meal with Korean BBQ Wings, enjoy a lasagna entrée, and finish it off with a Mississippi Mud Pie for dessert.

Veggie Castle serves Caribbean-inspired fare and fresh-squeezed juices at its locations in Brooklyn and Queens.

House of Vegans owners Laquana Barber and Stefan Hawkins started their business after experimenting in the kitchen and feeding their friends and family. Hawkins is a former McDonald’s employee who went vegan after seeing firsthand how the fast-food industry works. Their restaurant is the first Black-owned vegan restaurant in Harrisburg.

A post shared by House Of Vegans CFC (@house_of_vegans_)

This Philly spot, located in the heart of Germantown, serves up vegetarian and vegan soul food and baked goods and also sells purified water.

Nourishing and flavorful veggies and grains are the stars of every dish at this Trinidadian pop-up eatery.

This bakery serves up soul food eats and sweet treats. What could be better than cruelty-free comfort food?

The Bam’s Vegan stand can be found at farmers markets in the Dallas area, serving up vegan nachos, brunch, soul food, and much more.

The Soulgood food truck has a rotating daily menu as well as catering, a vegan bakery, and virtual cooking classes.

Vegan croque madame?! Vegan Food House in Dallas has it, plus delicious Nashville hot chicken sandwiches, shrimp pesto tacos, and even a mac and cheese–stuffed Beyond Burger.

A regular weekend vendor at the Dallas Farmers Market, Vegan Vibrationz is known for its Vegan Crunchwraps and Oyster Mushroom Po’boys. If you’re lucky, you can also try a vegan Snickers bar.

Beyond Vegan serves sandwiches, burgers, wraps, and salads along with superfood-packed smoothies, juices, and teas. Try the Chicken Waffle Sandwich with some antioxidant-packed elderberry tea.

This bistro aims to make plant-based eating “accessible to everyone—not just through our chefs making delicious food, but also through incorporating our generation’s forward-thinking beliefs and style into everything we do.”

After a year of operating out of a food truck, Twisted Plants owners Arielle and Brandon Hawthorne have settled down in a brick-and-mortar location in Milwaukee.

Inspired to eat clean? Switch to animal-free meals—for animals, your health, and the planet. Go vegan!

This piece was adapted with permission from RankTribe.