Looking for a recipe that will redefine what the phrase “cheat day” means to you? Look no further. When the folks at Beyond Meat rolled out plant-based burgers and sliders, we couldn’t wait to see what kinds of deliciously unholy meals we could make with them. And get this—the company’s Beast Burgers contain more protein and iron than beef and more omegas than salmon. Check out these simple kick-ass creations that we prepped with just a hot plate, a pan, some boiling water, and a bowl or two.

Beyond Meat’s Beast Burgers come frozen, so, for a traditional burger, all you need to do is cook the patty per the package instructions and place it onto a bun with your favorite veggie toppings.

To jazz it up, I threw a quick sauce together in a bowl as the burger cooked. I just mixed some of Follow Your Heart’s Roasted Garlic Vegenaise, a dash or three of Annie’s Organic Vegan Worcestershire Sauce, and some Dijon mustard. Then I added a pinch of sugar. 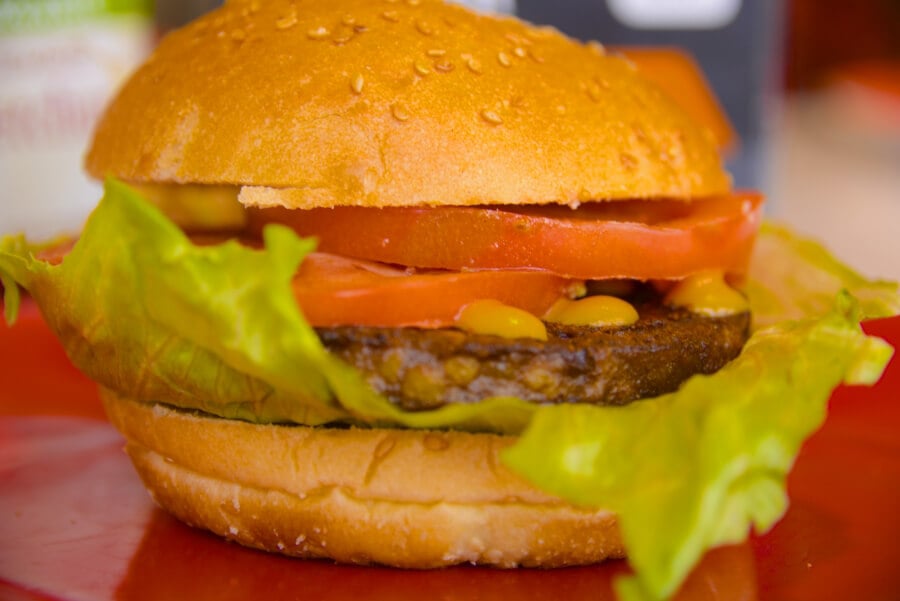 #ProTip: If you want to try this guy “protein style,” ditch the bun and wrap your burger in lettuce. 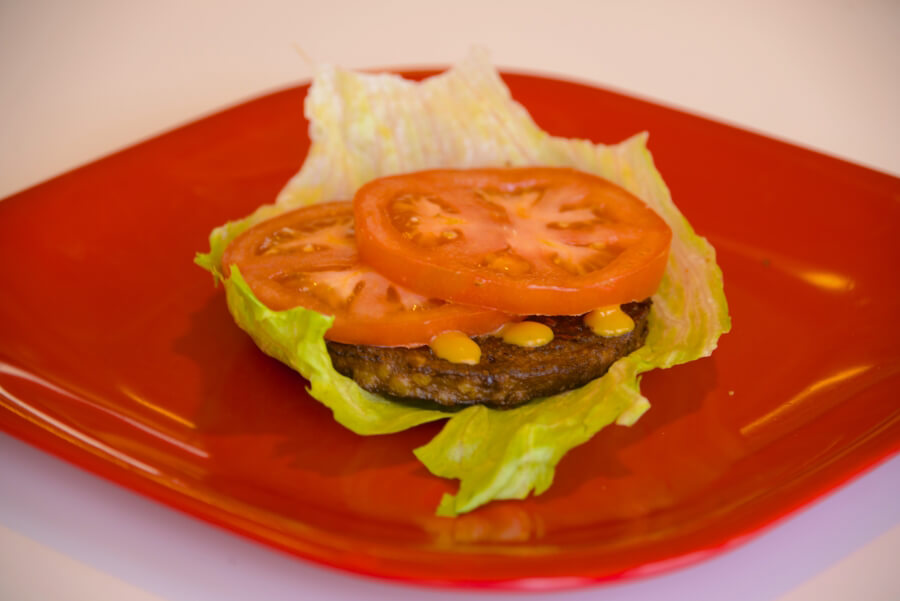 So there are a ton of recipes floating around online for Ramen Noodle Burgers, and most of them include an egg. Just between us—there’s zero need for an egg (or any animal product) to make delicious, satisfying sandwiches that will intrigue both the eye and taste buds of diners. 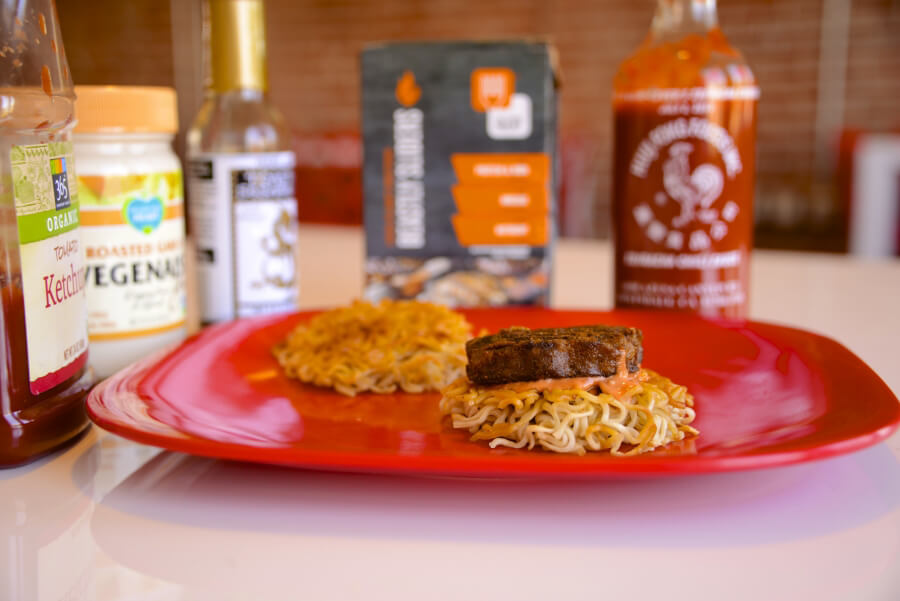 For these, I used Beyond Meat Beastly Sliders, some sesame oil, and a pack of instant ramen noodles. FYI: Nissin Top Ramen Oriental Flavor is vegan and available in many major grocery stores. The prep is totally simple. I made these in the office using boiling water from the coffee machine and a hot plate, so I have faith that you can make them at home.

First, toss the noodles into some boiling water to cook them (seasoning packet optional), strain off the water without rinsing the noodles, and then drop them into two little round, plastic ramekins to help them take a bun-like shape. (Trade secrets: Placing a weighted object, like a can of soda, on top of the noodles will help press them into place, and adding a few drops of your sesame oil to the ramekins before the noodles go in will help them pop out easily when the time comes.) Now throw those suckers in the fridge to set for half an hour or so.

Next, heat up some sesame oil in a pan. We’ll use it to fry our ramen buns, giving them some interesting textural notes and additional stability. Once they’ve finished setting in the fridge, plop your ramen buns out of the ramekins and into the hot oil. Listen up, because this is important—move the buns as little as possible as they fry. They’ll get crispy on the bottom and lightly brown all over as the heat travels up through the noodles. Once they’re cooked to your desired level of “done-ness,” carefully lift them out of the pan and place them aside. Flipping the buns gingerly with a pair of tongs once during cooking to crisp them evenly is recommended but not necessary. 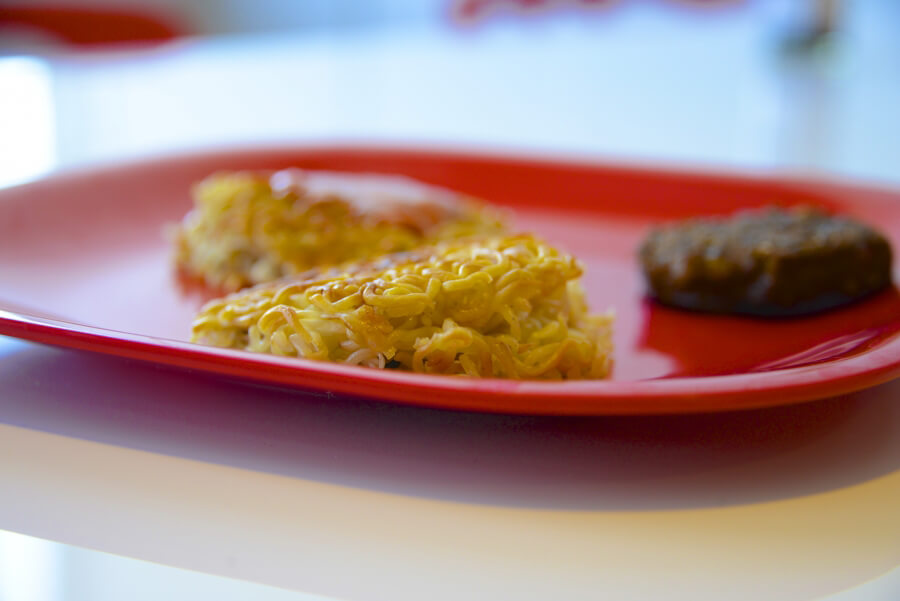 In the same pan, cook your Beyond Meat Beast Burger or Beastly Sliders as per the package instructions. You can add more sesame oil if needed. Once cooked, place your patty onto your buns, and—boom—you’re done. 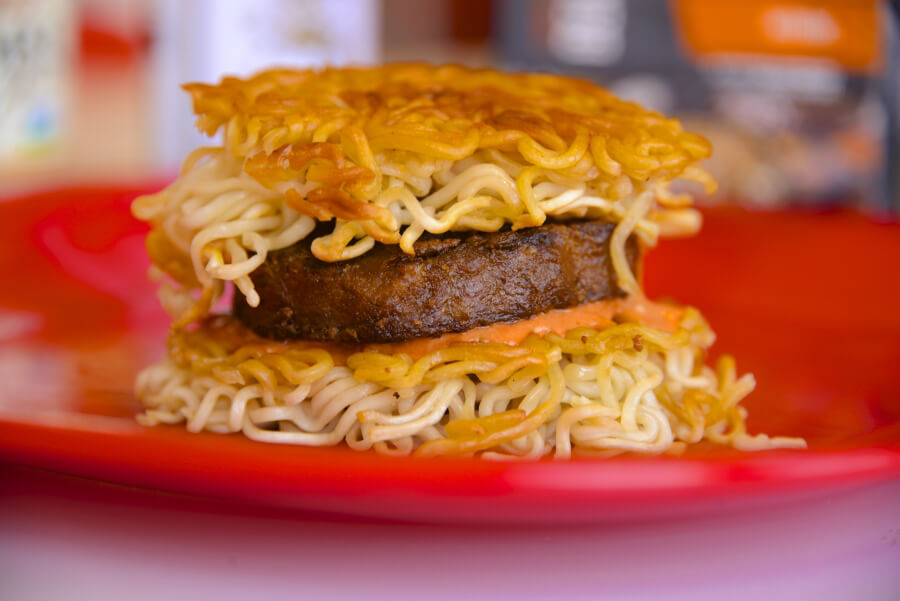 If you’re feeling fancy: While my ramen buns were setting in the fridge, I threw some Sriracha, ketchup, and Vegenaise together in a bowl and whisked up a quick, simple sauce with a bit of heat to top this burger.

You’ve found it – the mythical unicorn of sandwiches: a burger with two crazy grilled cheese sandwiches serving as the bun. WARNING: Allot time in your day for a post-consumption food coma, the likes of which you’ve never experienced. 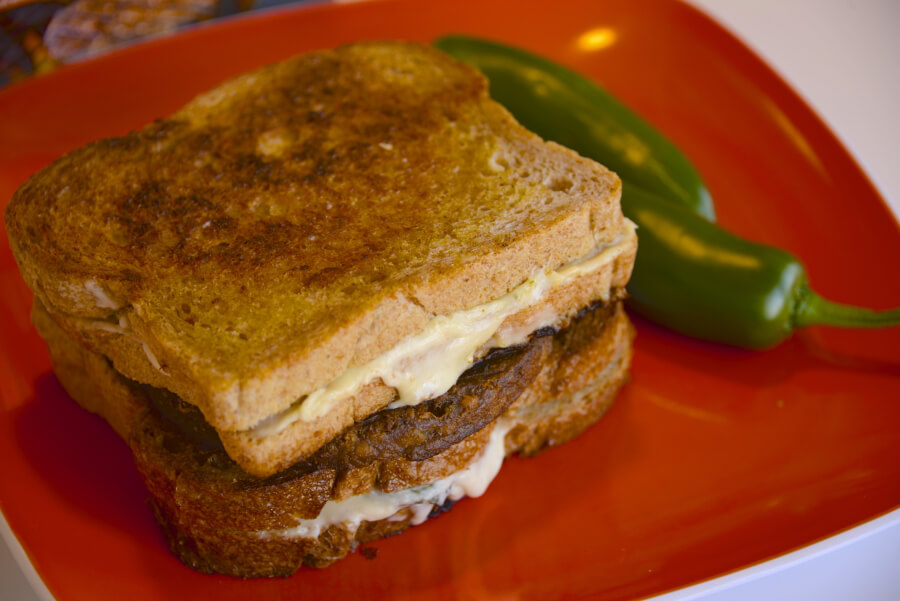 For this one, start here, at our recipe for Jalapeño Popper Grilled Cheese Sandwiches. (Side note: These are also bomb on their own.) Make two of them. I suggest using a kick-ass vegan cheese like Field Roast’s CHAO Tomato Cayenne Slices. Set it aside once the bread has toasted and the cheese has melted. It may be beneficial, if you’re able, to cook the burger and the sandwiches simultaneously so that neither rests too long before you’re ready to eat.

Cook your burger to the desired temperature, as per the package instructions. Once it’s done, just stick the patty between your two grilled cheeses. Take an excessive amount of photos to make your friends hella jealous/hungry (#jungry?), then eat. 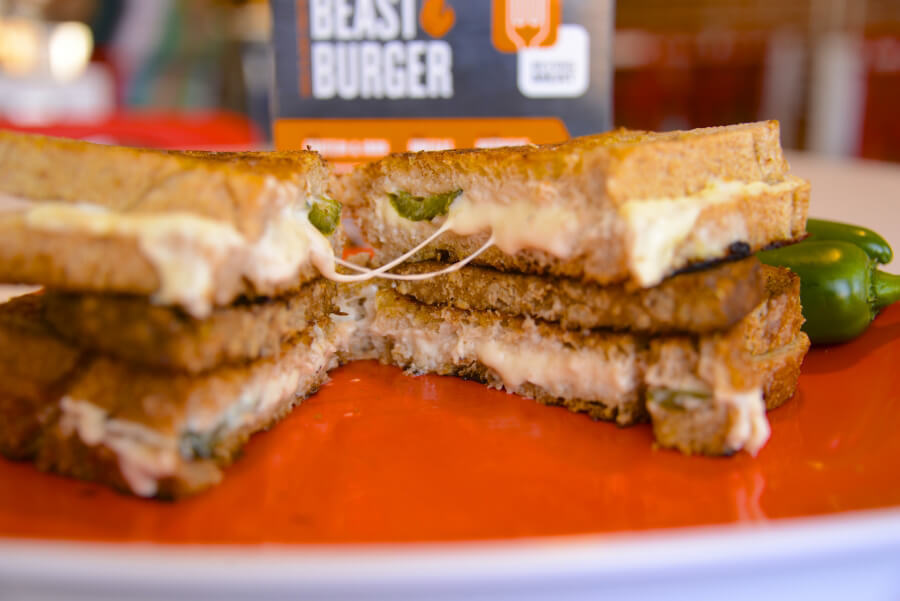