No More Chains: One Elephant’s Story

If you can finish a book after going through a box of tissues and still love it, the author has done something very right. Carol Bradley is such an author, and her book is titled Last Chain on Billie: How One Extraordinary Elephant Escaped the Big Top. Even for those who already know about the desperate plight of captive elephants, this bookis a gut-wrenching account of how profoundly elephants suffer in captivity. Yet after reading about how these animals can recover if given the chance, you close the book ready to take action in order to make that happen. 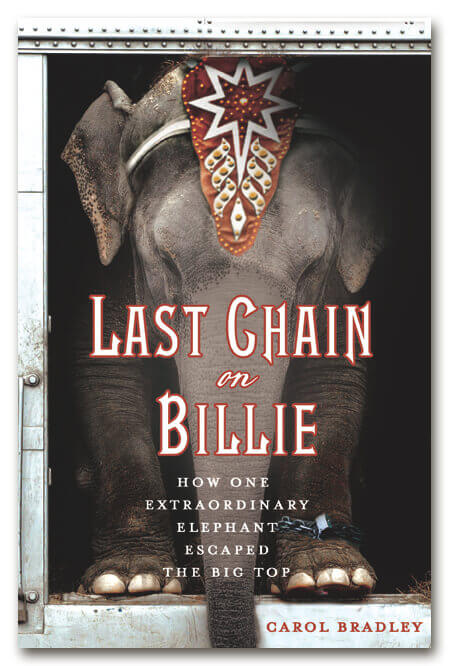 The contents alternate between chapters about modern-day elephant exploitation and historical accounts of how we started using elephants in entertainment, including how they’re captured in the wild, their grueling transport to the U.S., their high mortality rates, and the public’s fascination with these gigantic beings.

Although the book details the grim existence of Billie (a female Asian elephant), its overall theme concerns all elephants in the zoo and circus industries. Bradley tells us about the habits, histories, and personalities of many other individual elephants. Billie’s history is particularly abysmal, but she also represents all the elephants who have known nothing but misery in captivity.

In addition, the book focuses on the entrenched histories of the circus families. The people PETA protests against today are the descendants of the families of old that founded Carson & Barnes Circus, the Hawthorn Corporation, Kelly Miller Circus, Tarzan Zerbini Circus, and, of course, Ringling Bros. Little—if anything—has changed. These circus clans are still beating and chaining elephants and staunchly defending it, just as their ancestors did.

Over and over again, elephant trainers are quoted talking about their use of sheer force to break the animals. Bradley describes PETA’s video that shows notorious trainer Tim Frisco as he beats shrieking elephants and tells other trainers, “Make ’em scream!”

Bradley also pulls back the curtain on how inept the U.S. Department of Agriculture (USDA) is at imposing meaningful penalties and punishments, using John Cuneo and his Hawthorn Corporation as the case study.

Elephants at Hawthorn were beaten and housed in filthy, dark barns. Many were sick with tuberculosis and life-threatening foot problems. They were chained, front and back, for months on end—and in many cases, the USDA just kept delaying any kind of meaningful action. Cuneo was completely uninterested in why Billie was “hostile” and aggressive and attributed it to her “not being a pleasant elephant” instead of her life of beatings and captivity. After Billie rebelled and attacked a trainer, she was taken off the road and lived in chains in a dark Hawthorn barn for 10 years.

Even when Cuneo was finally forced to relinquish 15 elephants, including Billie, he was still allowed to keep his exhibitor’s license and to continue to torment 87 tigers and one lion. He is still in business, renting out big cats, to this day.

Last Chain on Billie is ultimately a book with a happy ending for some elephants. Billie, for example, is retired to The Elephant Sanctuary, where after she spends a considerable amount of time adjusting, she at last allows the chain attached to her leg to be removed.

This book is a wake-up call about how many elephants have suffered profoundly in captivity and how many still suffer. And it’s a call to action.