Dick Gregory Speaks Up for Animals in Circuses 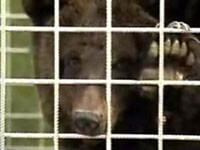 When I worked as a civil rights activist with the Rev. Martin Luther King Jr., we sought justice through peaceful means. I was a participant in all of the “major” and most of the “minor” civil rights demonstrations of the early ’60s, including the March on Washington and the Selma to Montgomery March. Under the leadership of Dr. King, I became totally committed to non-violence, and I was convinced that nonviolence meant opposition to killing in any form.

I felt the commandment “Thou shalt not kill” applied to human beings not only in their dealings with each other—war, lynching, assassination, murder—but in their practice of killing animals for food and sport. There are simple steps each of us can take to eliminate the exploitation of other beings. One is to refuse to go to any circus that uses animals. When I look at animals held captive by circuses, I think of slavery. Animals in circuses represent the domination and oppression we have fought against for so long. They wear the same chains and shackles.

No matter what the circus folks tell us, there is no way to persuade an elephant to “dance” or a tiger to leap through hoops without some threat of punishment or violence. Big-cat trainers carry whips; elephant handlers use bullhooks—sharp, hooked metal tools used to poke and jab sensitive spots. Behind the scenes, trainers often use electric stunning prods and heavy sticks to make their point.

Circus animals are caged and shackled and forced to work when the boss says so. They never have even a taste of freedom, but go from cage to circus ring to cage. They travel thousands of miles during the performing season, which means long hours in boxcars or tractor-trailers with no room to stretch, let alone run!

Ringling Bros. and Barnum & Bailey is one of the most famous and profitable circuses in the world. Even so, it has been cited for violating the Animal Welfare Act (the only federal law protecting animals in performing shows) more than 100 times.

This year already, two Ringling animals have died on the road. One was Kenny, a baby elephant forced to perform in two shows and appear in a third in one day even though he was ill. After the third show, he lay down and died. Kenny was only 3 years old and would have stayed with his mother in the wild for up to 15 years.

The other casualty was a tiger being used in a Ringling publicity photo shoot. When the tiger attacked one trainer, the other trainer on the scene returned the animal to his cage, got a gun, and shot the big cat to death.

Animals and humans suffer and die alike. Violence causes the same pain, the same spilling of blood, the same stench of death, the same arrogant, cruel, and brutal taking of life. We don’t have to be a part of it.

(Dick Gregory is a civil rights activist, author, and comedian)