Are Cats a Woman’s Best Friend? 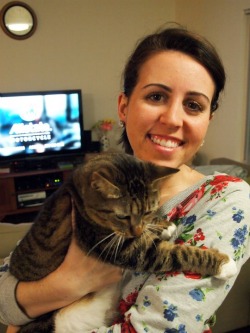 The following article was written by Joe Taksel and originally appeared on PETA Prime.

A recent article in Time magazine reports on a new scientific study confirming what many of us “cat people” have known all along: Cats and their humans, especially women, form strong social bonds and a mutual understanding based on affection—and maybe just a little indulgence.

The researchers closely followed nearly every interaction between 41 cats and their human families over a lengthy period. What they found was that both the cats and their guardians responded to the other’s desire to interact—in everything from petting to being held to playing games. The study took the old concept that a cat’s behavior toward humans was based solely on the animal’s desire for food and stood it squarely on its head.

What the researchers observed was true mutual social attachment (i.e., love) as well as a return of affection by cats who were previously shown affection by their guardians. The humans and the cats were observed having direct influence over each other’s behavior. The study showed that the dynamics underlying the relationship between mutually adoring cats and their humans are nearly identical to human-to-human bonds.

So once it’s established that humans and cats form special social bonds with each other, how do we explain the fact that most cats prefer to interact more with women than men? Cat-loving men, take heart! Thanks to this study, we may finally have the answer. The observed cats repeatedly returned affection to the human who had previously shown affection toward the cat, and that human was female most of the time. The corollary to that observation would be that if the human who interacted most with the cat were a man, the cat would return the affection to the man.

Disclosure: I am a male, and I can attest to the depth of love, affection, and understanding that exists between a man and a cat. Whether I’m playing hide-and-seek with a cat, talking to a feline friend (yes, I had a cat who loved a multisyllabic chat), or just nodding off for a nap induced by a kitten’s hypnotic purr, I can say unequivocally that cats are this man’s best friend.