Since PETA launched its campaign to end cruel and worthless canine muscular dystrophy (MD) experiments on dogs at Texas A&M University (TAMU), the school has been, shall we say, not entirely honest about its dog laboratory. Here are nine facts about the experiments that TAMU isn’t sharing.

1. Former lead experimenter Joe Kornegay and his cohorts have deliberately bred dogs to have canine MD since 1981, when Dusty and Rusty—two golden retrievers afflicted with the disease—were “donated” to a university laboratory so that they could be used to breed more affected puppies. Another heartless experimenter now runs the lab, and the breeding continues. 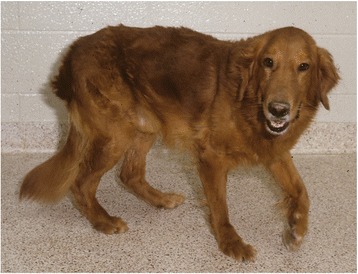 Rusty, shown here in a photo published in an article that Kornegay wrote about this experiment, was “donated” by his owner to a university laboratory along with his brother, Dusty. Both dogs—known then as “Dog 1” and “Dog 2″—had canine MD, and the experimenters decided to use them to “develop” a colony of afflicted dogs. Rusty died in a laboratory when he was 6 years old. Source: Kornegay, 2017

2. Golden retrievers who are born with canine MD are too weak to suckle effectively. Even when given supplements, their growth is stunted.

3. When they’re 6 weeks old, afflicted puppies’ hind legs may shift forward. Combined with muscle weakness, this makes them unsteady on their feet. They also have difficulty opening their mouths.

4. At 10 weeks of age, the dogs’ hind legs stiffen and moving at all becomes a struggle. They also salivate excessively because of weakness in their jaws, and they strain to swallow. They become tired after even minimal exercise.

5. Dogs afflicted with canine MD have weak esophageal muscles, which can cause them to contract aspiration pneumonia—a potentially fatal infection—by inhaling food, saliva, vomit, or other liquids into their lungs. The simple acts of eating and drinking put them at risk for death.

6. The dogs most commonly used in canine MD experiments are golden retrievers, but experimenters have also used spaniels, corgis, beagles, Labradors, and mixed-breed dogs. Kornegay reports that clinical signs of the debilitating disease “progress particularly rapidly” in golden retriever puppies between 3 and 6 months of age.

7. In some laboratories, newborn mortality of dogs bred to have canine MD is as high as 32 percent. Kornegay boasts that at TAMU, “survival of [golden retriever muscular dystrophy] dogs is typically 70–80%.” But in order to have enough dogs on which to experiment, he must take into account the numerous expected puppy deaths when determining the extent of his dog-breeding program, as he explains:

An average of 2.25 affected pups from each litter survive beyond 10 days of age. To provide an approximate number of affected dogs that can be produced each year by each carrier, the following formula is used: Affected pups/carrier each year = 2.25 (surviving pups/litter) × 0.83 (estrous cycles/year considering multiple factors) × 0.85 (conception rate) …. Using this formula, each carrier produces only about 1.58 affected pups/annually. Thus, to produce 15 affected dogs each year, one must maintain ten carriers. (Kornegay et al., 2011)

8. Although Kornegay bred dogs to have crippling and painful canine MD for nearly four decades, he admits that findings from experiments on dogs cannot easily be applied to humans: “[D]ata derived from [animal] models do not uniformly translate to [Duchenne muscular dystrophy] patients. This failure of translation likely occurs due to both physiologic differences between animals and humans and the lack of sufficient rigor in preclinical [i.e., animal] studies. … Differences in histologic changes and disease progression undoubtedly reflect disparate pathogenetic mechanisms among species” (Kornegay et al., 2014).

9. There are sophisticated, non-animal research methods that offer real hope to MD patients. For example, using cells obtained from humans with MD, scientists recently succeeded in restoring the function of a critical protein—a discovery that may result in treatment for up to 60 percent of those who suffer from Duchenne MD. Researchers are finding ways to grow functional human muscle tissue for transplantation into patients in order to restore muscle function or screen potential new drugs. In addition, Harvard scientists recently engineered a human “tongue-on-a-chip” that uses muscle stem cells from MD patients to recreate human muscle tissue on thin, microfluidic devices. Using this model, the scientists were able to explain, in part, why muscle regeneration fails in these patients and leads to profound muscle weakness.

Urge TAMU to Stop These Experiments