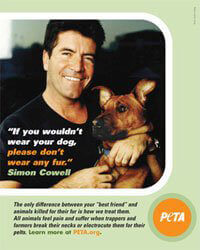 If you’re out to win Simon Cowell’s vote, you’d better not step onto the stage wearing fur. He’s famous for being abrasive to aspiring pop stars, but has put his compassionate side in the spotlight in PETA’s fur campaign.

Cowell is informing consumers that every bit of fur in coats, collars, and cuffs means that animals have been cruelly trapped, drowned, or beaten to death in the wild or gassed, strangled, or electrocuted on fur farms. PETA’s recent undercover investigation into the Chinese dog and cat fur trade showed that these horrors have been extended to animals who are often considered to be companion animals.

Cat and dog fur is often deliberately mislabeled as fur from other species and is exported to countries throughout the world to be sold to unsuspecting customers in retail stores. China supplies more than half the finished fur garments that are imported for sale in the United States, so the bottom line is this: Because cat and dog fur is mislabeled so often, if you’re buying fur, there’s no way to tell whose skin you’re wearing.

PETA went into an animal market in southern China and found that cats and dogs were languishing in tiny cages, visibly terrified and in pain. Some had been on the road for days, transported in flimsy wire cages with no food or water. Up to 20 cats were locked into a single cage.

Because of the cross-country transport in these conditions, many cats arrived dead. Dying cats and dogs were also inside these cages, as were cats and dogs with open wounds. Some animals were lethargic, and others were fighting with each other, driven insane from confinement and exposure.