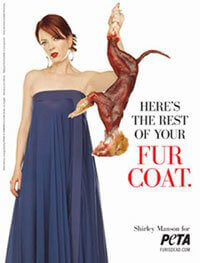 From her lyrics to her life, Garbage frontwoman Shirley Manson is known for being strong, sexy, and not afraid to speak her mind. That’s why the gorgeous Scottish-born rocker agreed to step in front of the camera to show consumers what the fashion industry doesn’t want you to see: the bloody, lifeless bodies of animals who were drowned, beaten to death, gassed, electrocuted, or even skinned alive for their fur. Holding the bloody body of a skinned “fox,” Shirley tells fur-wearers, “Here’s the rest of your fur coat,” in PETA’s new hard-hitting anti-fur ad.

Says Shirley, “When PETA approached me about this particular campaign, I was really honored to be asked, and I felt like I had a chance to add my voice to the dissent against the way animals can be treated all over the world by all persons.”

Shirley, who is on hiatus from Garbage, is currently working on her first solo album. She joins the ranks of Pamela Anderson, Pink, Persia White, and Simon Cowell as the latest star to appear in a high-profile anti-fur advertisement for PETA.