Four old bears are happy now after decades of hell. They were all living alone inside tiny cages at a defunct Pennsylvania roadside zoo named Big Bear Farm Zoo Park. They once had been trained to ride bicycles and do other stupid tricks, but that stopped when the roadside zoo closed its doors in 1995. The bears had not set foot outside these cages in at least 20 years. PETA found out that the man who owned the bears was planning to give them away, so we stepped in.

PETA secured a bear expert to assess their health and determine whether they were able to travel. The expert gave the OK, but because of their advanced ages and for safety’s sake, we had two veterinarians accompany them on their journey to their new home at Colorado’s Wild Animal Sanctuary. 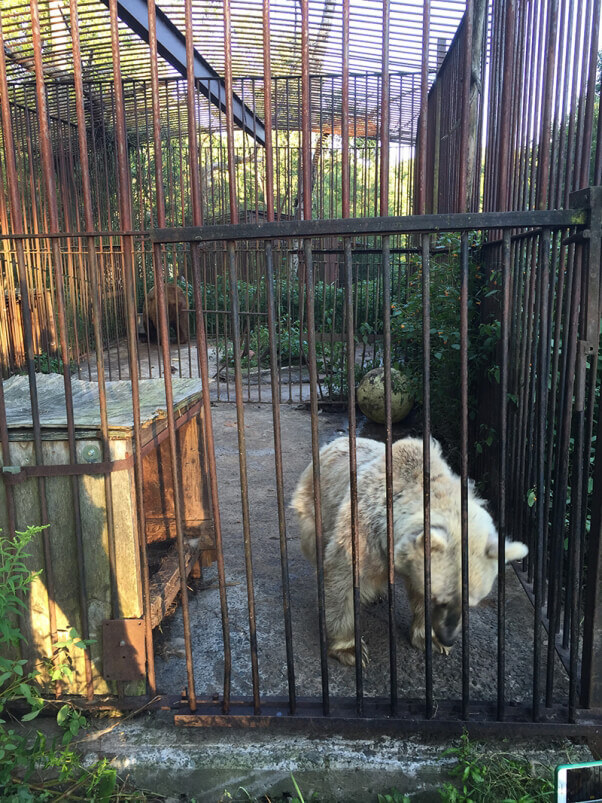 Fifi is a 30-year-old Syrian brown bear who has difficulty walking and appears to suffer from severe arthritis in her rear limbs. At The Wild Animal Sanctuary, she is finally getting the veterinary treatment that she desperately needs.

Now, Bruno, Fifi, Pocahontas, and Marsha will have acres of prairie grasses to roam, swimming holes, and the veterinary care that they desperately need. Rather than being confined individually to tiny cages in which they could barely take a few steps in any direction, the bears will live in social groups, allowed to choose how they spend their time. Instead of small, rotting wooden doghouses, they will all have their own underground dens! 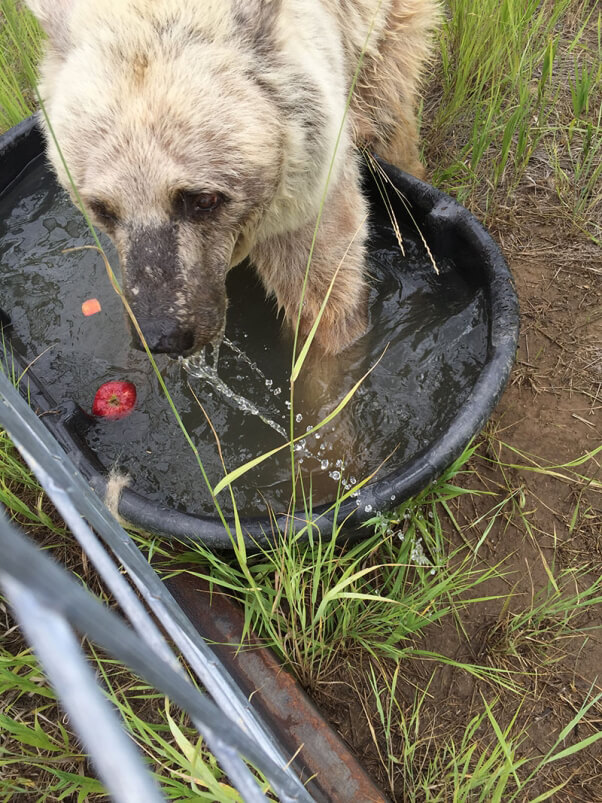 Despite her lameness, Fifi wasted no time exploring her new temporary enclosure, making a beeline for her new pool and promptly submerging herself for likely the first time ever.

Upon arriving at the sanctuary, Bruno, Pocahontas, and Marsha were understandably cautious when the cage door was opened, but bold Fifi headed straight for a dip in the tub. Bruno and Marsha soon followed suit. This was likely the first chance that these bears had to take a dip in decades. 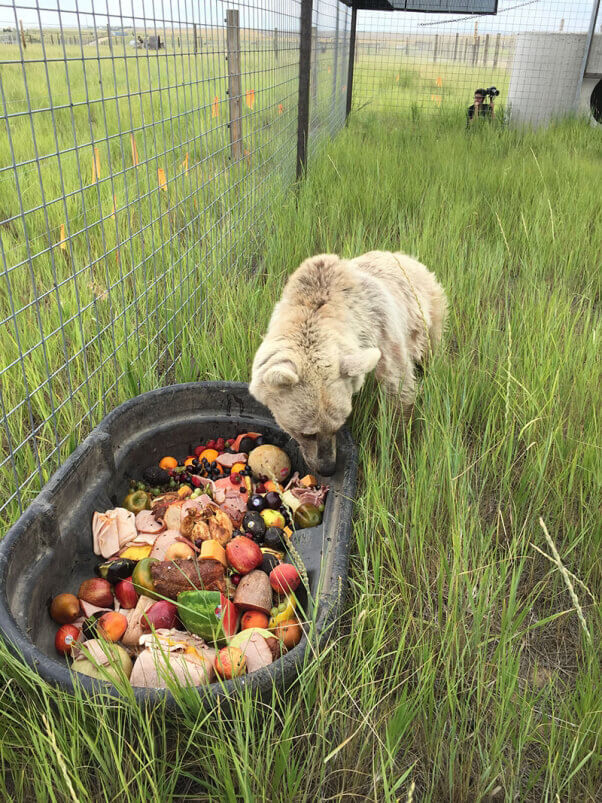 Fifi reveled in the huge tub of nutritious food that greeted her in her new enclosure. She was so excited that she climbed into the tub and rubbed her face in its bounty!

The four needed a bit of time to adjust to their new and improved circumstances and spent about a week in temporary enclosures that were around three times the size of their former pens before they were given access to their wonderful permanent habitats. 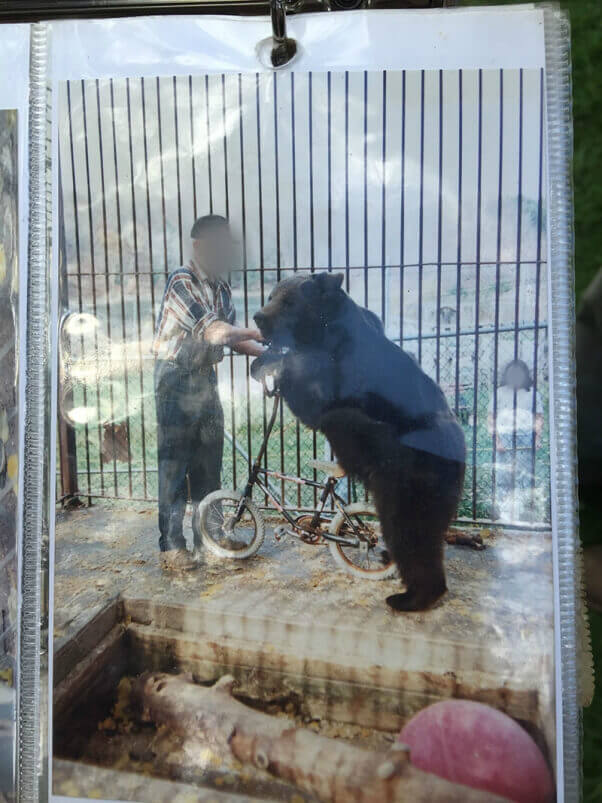 Bruno, a 30-year-old Syrian brown bear, was forced to ride a bicycle in cruel circus-style performances at the roadside zoo. 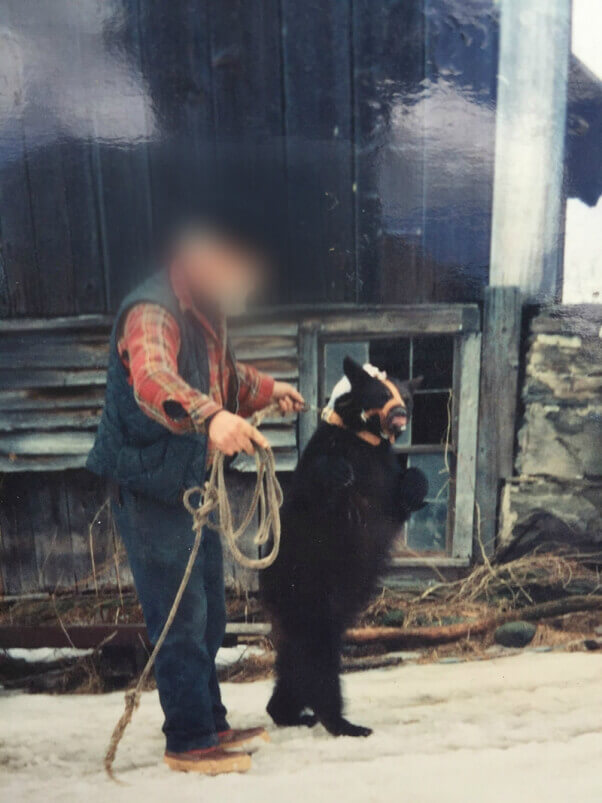 The bears’ former owner forces a young bear to walk upright by holding a cruel muzzle taut near the bear’s neck, preventing him or her from walking normally on all fours. 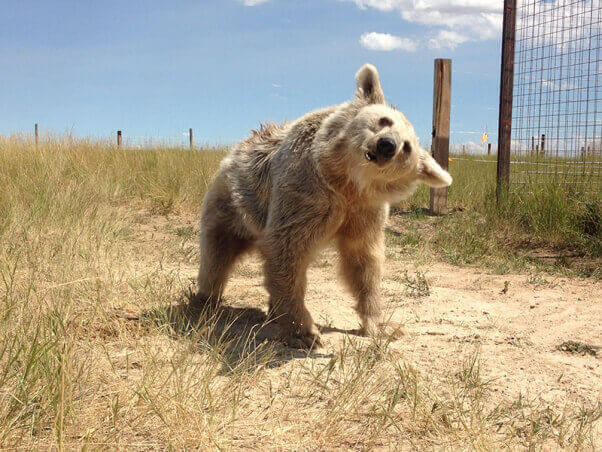 After several weeks at the sanctuary with the benefits of veterinary care, natural terrain, and more space, Fifi is walking better. All the bears are doing wonderfully, but Fifi, in particular, loves to roam in her new habitat, cool off in her pool, and relax in her underground den.

Their new life is a far cry from the years when they were forced to perform tricks (Marsha was reportedly once used in ads for Burger King and Poland Spring Water) and from the conditions at the zoo, which repeatedly violated the federal Animal Welfare Act.

Five bears living in a depressing concrete pit at the Three Bears General Store in Tennessee deserve the same happy ending. Please ask the store’s owner to close the pit for good.