Laissez les bons temps rouler! Each year, Mardi Gras—or “Fat Tuesday”—is celebrated throughout Louisiana (and the world). It’s the day before Ash Wednesday, which marks the beginning of Lent. This cultural phenomenon, which draws people from around the world to the Big Easy each year, is marked by parades, music, and tons of sweet, fatty foods. The iconic dish of Mardi Gras is the king cake, generally a ring-shaped cake covered in icing with green, purple, and gold sprinkles. Traditionally, there’s also a small porcelain baby baked into the cake representing Jesus, which is supposed to bring luck and prosperity to the person who finds it. While the dessert is sometimes made with eggs stolen from chickens and milk meant for baby cows, here are five vegan king cakes to try in Louisiana. They’re made without any animal exploitation and suffering, and they’re sure to satisfy.

Here are our picks for the top vegan king cakes in Louisiana for Mardi Gras 2022:

MJ’s Café is a vegan-friendly restaurant that makes doughnut-sized vegan, gluten-free, and nut-free king cakes. Two popular flavors are available: Traditional Cinnamon and Chocolate Tahini. The restaurant will be selling a limited number each day until Mardi Gras, so stop by early to grab yours before they’re all scooped up! 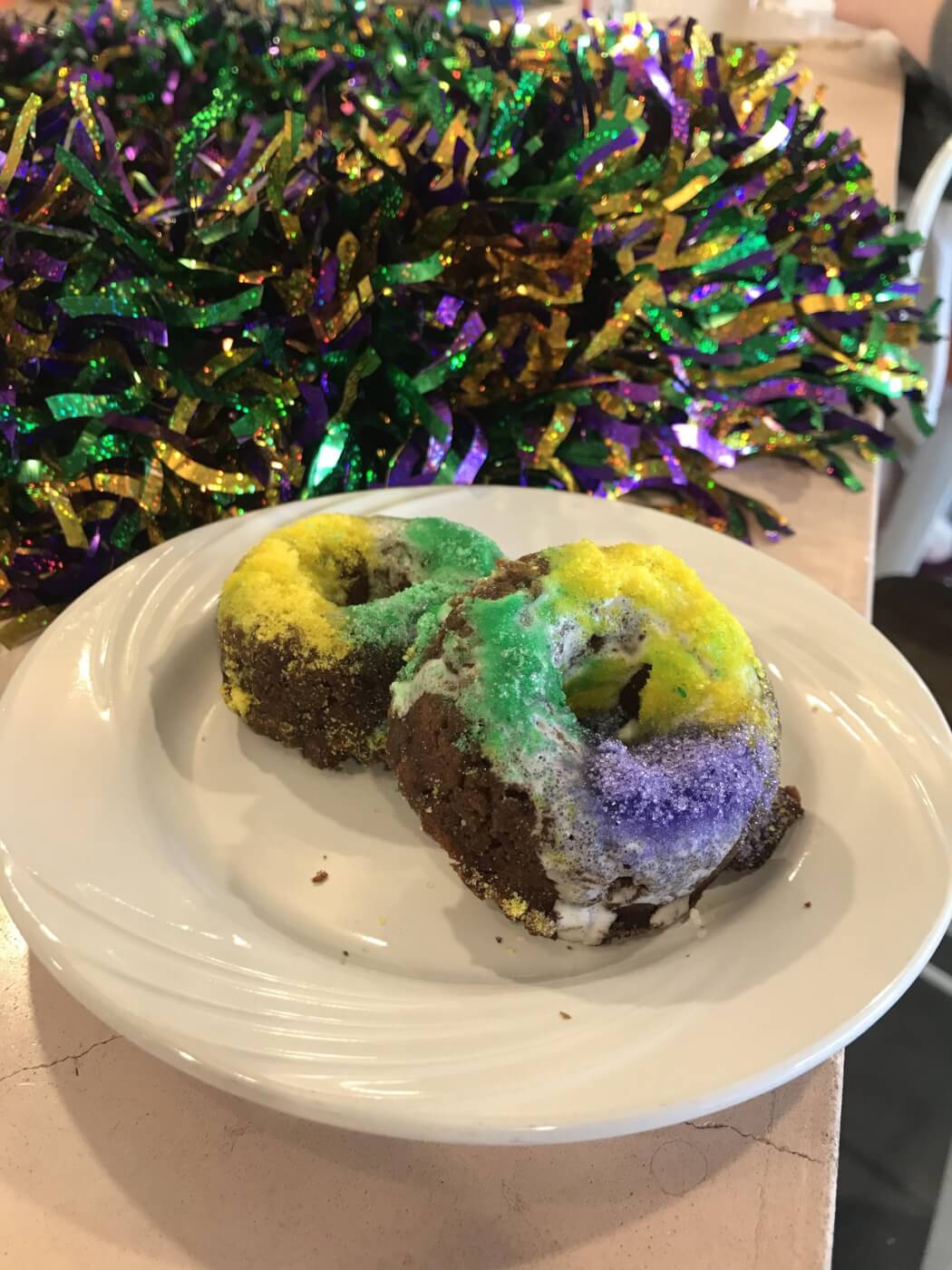 For Mardi Gras, Magpie Cafe is offering individual-sized Vegan King Cakes with cinnamon pecan filling, topped with icing and the traditional purple, green, and yellow sugar sprinkles. Magpie Cafe offers a wide variety of other vegan pastries year-round, including muffins and cheesecakes. The vegan king cakes are made to order and available ahead of Mardi Gras—the bakery offers individual-sized cakes in store and larger-sized cakes available for ordering at least 48 hours in advance.

Breads on Oak owners Sean and Chamain O’Mahony have been selling vegan versions of Louisiana dishes for a decade. Each year, the restaurant offers a variety of king cakes available throughout the Mardi Gras season. They’re made with an organic cinnamon brioche base, topped with vegan maple glaze and all-natural, vegan Mardi Gras color sprinkles. The cakes can be ordered unfilled or filled with a variety of vegan options: cream cheese, Bavarian cream, almond cream, tiramisu, and praline pecan. They also come in adult flavors like Strawberry Rum Cream Cheese, Brandy Raspberry Almond Cream, Bourbon Praline Pecan, and Baileys & Cream. Order yours online for local pickup or nationwide shipping. 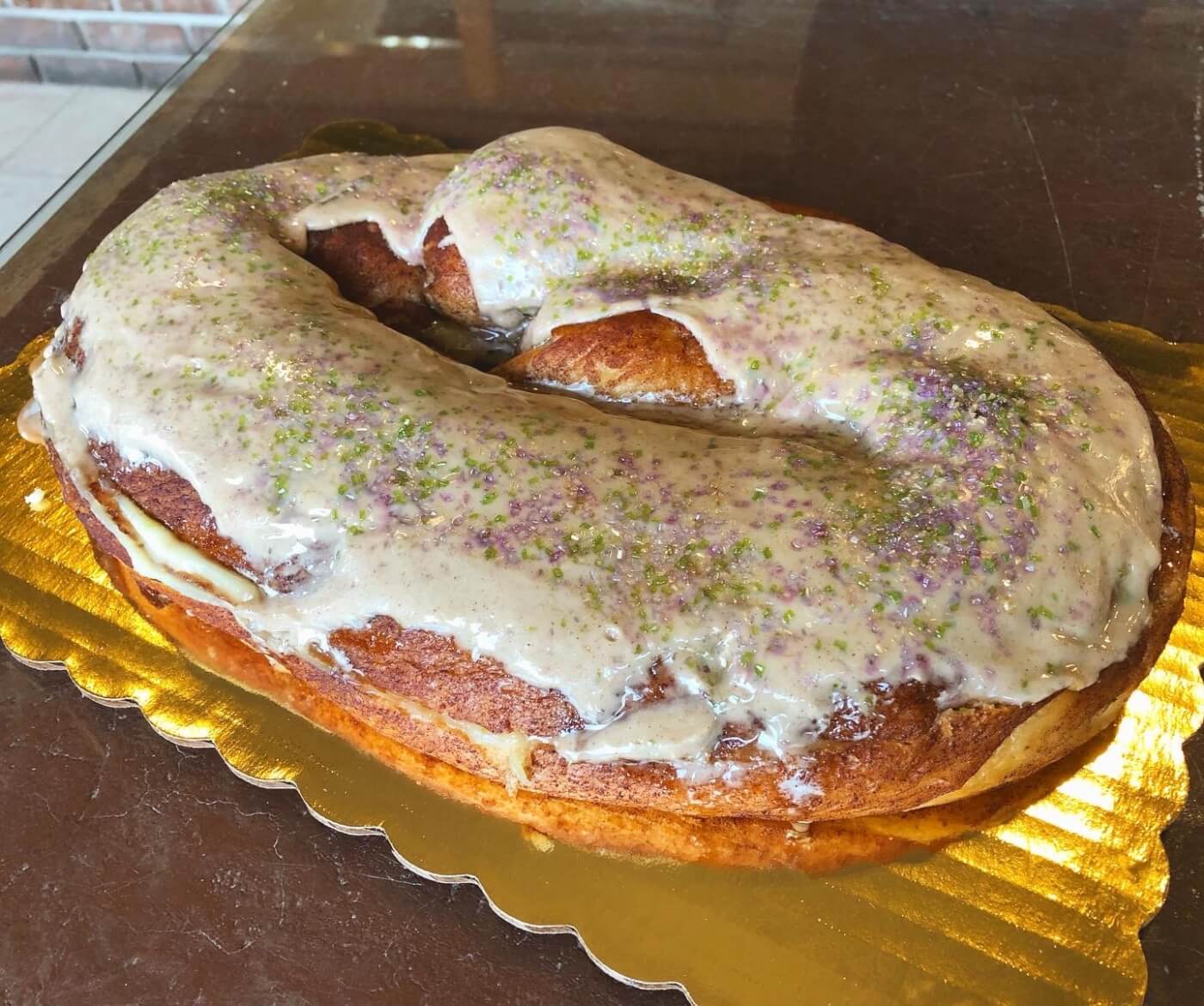 White House Coffee and Creamery offers vegan and gluten-free king cakes, in addition to a wide variety of other vegan desserts. The king cakes are available by the slice or whole and can even be ordered frozen and undecorated so that you can decorate them at home. 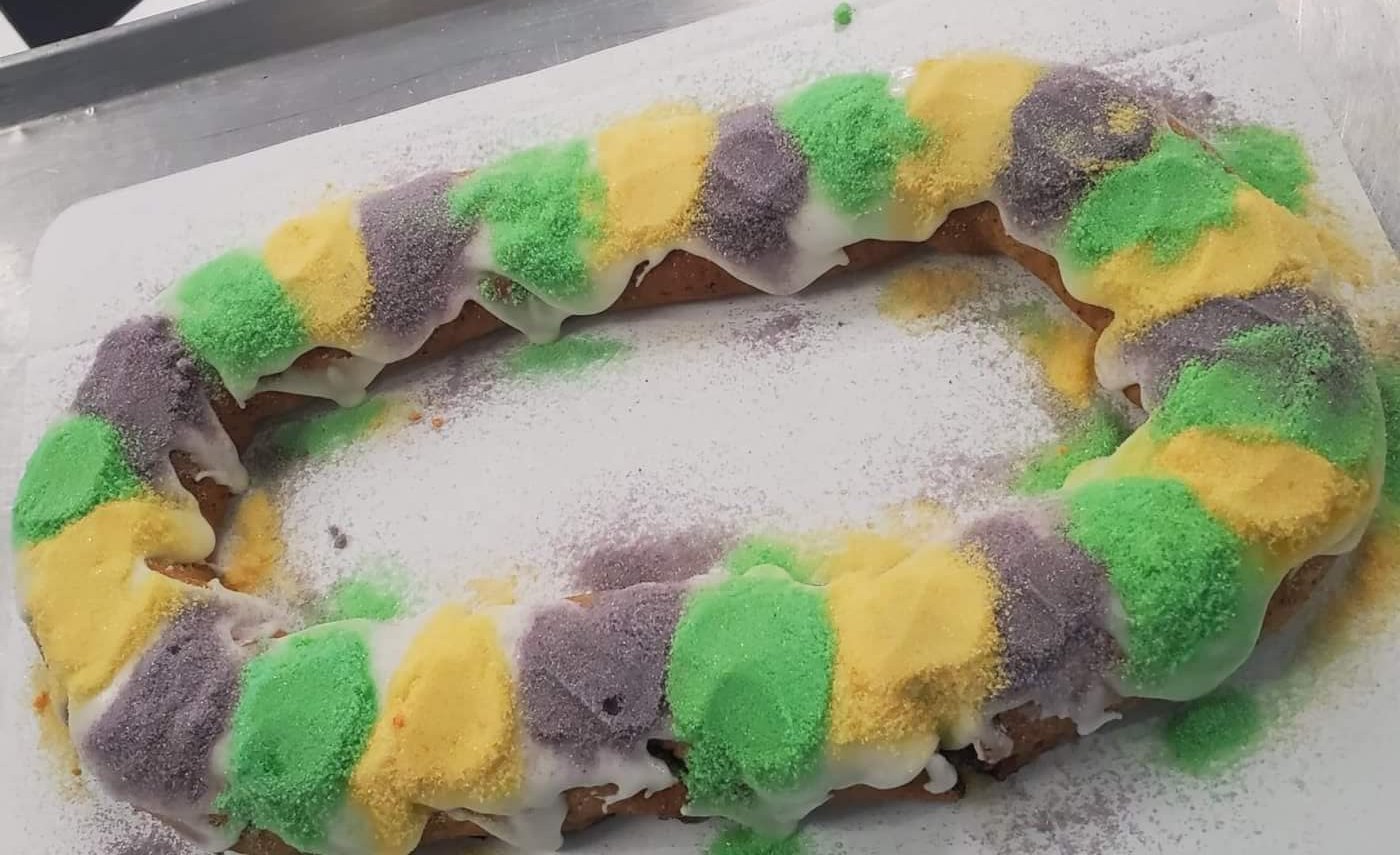 You can find Creme Confectionery’s king cakes at locations around the New Orleans area, including Haydel’s Bakery, Grounded Coffee Cafe, the Lafreniere Park Farmers Arts Market on Wednesdays from 2 to 7 p.m., and other locations announced ahead of time on the confectionery’s social media. The Vegan King Cake is a soft, fluffy sweetbread rolled with cinnamon sugar and topped with vanilla icing and purple, green, and gold sugar. The Filled King Cake can be made vegan by request.

All these bakeries are making it easier for people to celebrate holidays like Mardi Gras without supporting the violence of animal agriculture. These cakes offer tons of flavor without doing an ounce of harm to chickens or cows. It’s easy to celebrate Mardi Gras while being kind to animals—check out these vegan Mardi Gras recipes for your own inspiration. And if you don’t live in Louisiana, don’t worry—we have a recipe for mini vegan king cakes that are sure to get you in a festive mood.

Go vegan for the rest of the year and save the lives of countless animals. Our free vegan starter kit and 3-Week Vegan Challenge can help you get started: