Grammy-nominated and Billboard Music Award–winning soulful R&B singing sensation Mario has been climbing the charts with his new album, D.N.A., and now he is stepping up to do his part for animals by posing for our provocative “Ink, Not Mink” campaign. The multitalented Baltimore native exposes his “Soul Truth” tattoo and encourages his fans to “[b]e comfortable in your own skin, and let animals keep theirs,” with this sexy ad. 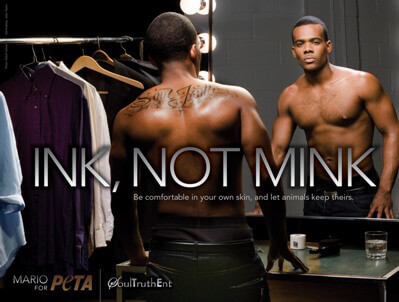 Behind the scenes at the photo shoot, Mario talks about learning the ugly truth about cruelty in fashion and why he chooses not to wear any fur. “Every piece of fur that you see out there and people wearing, there’s an animal [who’s] lost … his or her life.” This realization prompted him not just to give up wearing fur but also to pass up opportunities to profit from the suffering of animals. In the video, he tells us, “I’ve been offered deals to wear fur … for tour and for stage.” But Mario proves with this ad that he’d rather go shirtless than steal the skin of a beautiful animal. Find out what else Mario had to say in PETA’s exclusive interview video:

Join Mario and other compassionate celebrities by pledging to be fur-free today!

Pledge to Be Fur-Free!