In the past two decades, pit bulls have become the most abused dogs on Earth: They are the breed of choice for dogfighters; thugs who beat, starve, and neglect the animals in order to make them “mean”; people who use them as “guard” dogs, chained outdoors in all weather extremes; and worse. At just 12 or 13 years of age, many young men in neighborhoods across the U.S. are given pit bull puppies as a macho “rite of passage.” 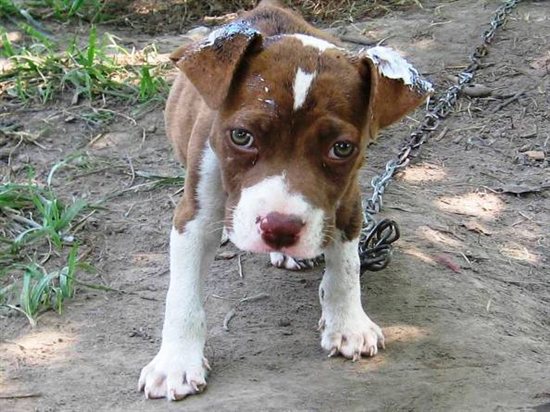 PETA’s Emergency Response Team handles hundreds of cases involving abused and neglected pit bulls every year, and it works to improve the living conditions for pit bulls across the country and to ensure prosecution when the dogs are abused.

But that’s not all we do to help pit bulls in need—PETA also ensures the following:

After the passage of a San Francisco law requiring pit bulls to be sterilized, officials there reported that between February 2006 and August 2007, San Francisco’s shelter took in 25 percent fewer pit bulls and had a 33 percent drop in the number of pit bulls euthanized.

PETA wants to see that kind of success across the country, and we need your help to do it.

Because there are so many pit bulls in need, PETA has created a special fund to help just them. Your donations to this fund will help us to sponsor lifesaving spay or neuter surgeries for pit bulls across the country as well as to provide relief from the elements to pit bulls in dire living situations. Please help abused dogs by making a special donation today: