Duff McKagan (member of popular bands such as Guns N’ Roses, Velvet Revolver, and Loaded ) and his wife Susan Holmes McKagan (international supermodel and star of the E! television show Married to Rock) have teamed up with PETA to star in a smoldering “Ink, Not Mink” ad. The couple aims to encourage people to be comfortable in their own skin and let animals keep theirs. 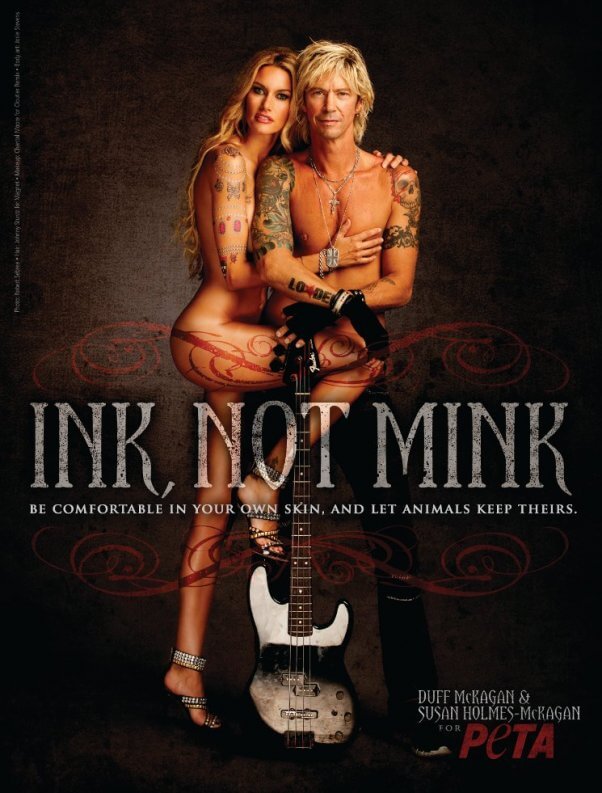 Susan used to wear fur—but once she learned that animals who are killed for their fur are beaten to death and often skinned alive, she had a change of heart. This revelation inspired her and Duff to take part in the “Ink, Not Mink” ad series so that they could spread the word to others. Susan explains, “I think everyone should share responsibility in bringing more awareness that, hey, [fur’s] not necessary, it’s out of fashion, it’s completely immoral to the animals.”

Shocking undercover photos and video footage of a Swedish fur farm shows minks suffering and dying in order to be turned into coats, hats, and other accessories. Minks on fur farms are crammed into filthy, wire cages—piled on top of each other, they can’t take more than a few steps in any direction. They often go insane, and many even resort to self-mutilation and cannibalism. Animals on fur farms languish in these conditions, often suffering from open wounds and receiving no veterinary care, until they meet a painful death. You can view the photos and learn more about minks here.

Now, watch exclusive behind-the-scenes video footage of Duff’s and Susan’s “Ink, Not Mink” photo shoot to learn more about why they refuse to wear fur. Then join Duff and Susan in pledging to be fur-free!