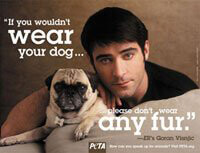 This arresting image of Visnjic and his dog was launched in Croatia on billboards in Zagreb and Split, as well as on leaflets that members of Animal Friends Croatia handed out to fur-wearers walking their dogs in parks. The ER doc’s prescription for fur-free fashions also was plastered on billboards and leaflets around the United States.

Goran was inspired to speak out after seeing a magazine spread featuring fur. “[My wife and I] were disgusted,” he says. “What’s going on? Civilization is advancing, but some people are going backwards. Today we can use many different materials to warm ourselves without killing other beings. [Ninety percent] of the people seeing a person wearing a fur coat think that person is an idiot.”

Goran believes that animal protection is an issue that crosses all political and social boundaries. “Somebody once asked me, when war was happening in my country, why don’t you do more for humans, against wars?” he says. “It’s our own stupidity that people are so violent to each other. What people do to animals is a one-sided war, and animals are innocent and cannot protect themselves. It’s important to be a protector of this planet, not a destroyer.”

Help Goran spread the message about fur-industry cruelty by distributing leaflets at dog parks in your area. One look at this debonair duo and folks might just hang up their minks once and for all.