Honk if You Love Geese! 8 Facts That Will Make You Ditch Down

No, they don’t really lay golden eggs—but geese do have rich inner lives, relationships, and emotions. It’s easy to see why these waddling, family-oriented birds are so beloved by parkgoers. But to the meat and fashion industries, sensitive geese are seen as merely flesh to fatten for food and feathers to steal for down.

Workers cram geese into tight, feces-covered cages and transport them to slaughter, all so that their diseased livers can be served as a “delicacy” and so that their feathers can be turned into jacket filling. However, when they aren’t being exploited, geese lead fascinating lives. Here are 8 things you may not know about them—and why you should never support the industries that kill them.

That’s right—“Mother Goose” isn’t just a fairytale legend. Before their eggs even hatch, mother geese guard their babies, camouflaging their nest with sticks and brush to keep them warm and shelter them from predators. Male geese typically watch over the nest from a distance to keep the eggs safe without revealing their location to a predator.

The inseparable bond between mother geese and their young—also called “imprinting”—takes effect shortly after the eggs hatch. The babies immediately begin following their mother around everywhere and stay with their families for about a year.

2. They stick together through thick and thin.

You’ve heard the saying that “birds of a feather flock together,” and loyal geese are prime examples of this. In their social circles consisting of multiple families of geese—also known as a “gaggle”—these empathetic, tight-knit birds look after one another. They even take shifts performing different duties for the group—for example, when flying in a coordinated V formation, geese will take turns in the front position so that no one gets too tired. While flying, they encourage each other to keep up by making “honking” calls, and if one of the geese in the flock becomes sick or wounded, a few others will remain by their side until they recover. 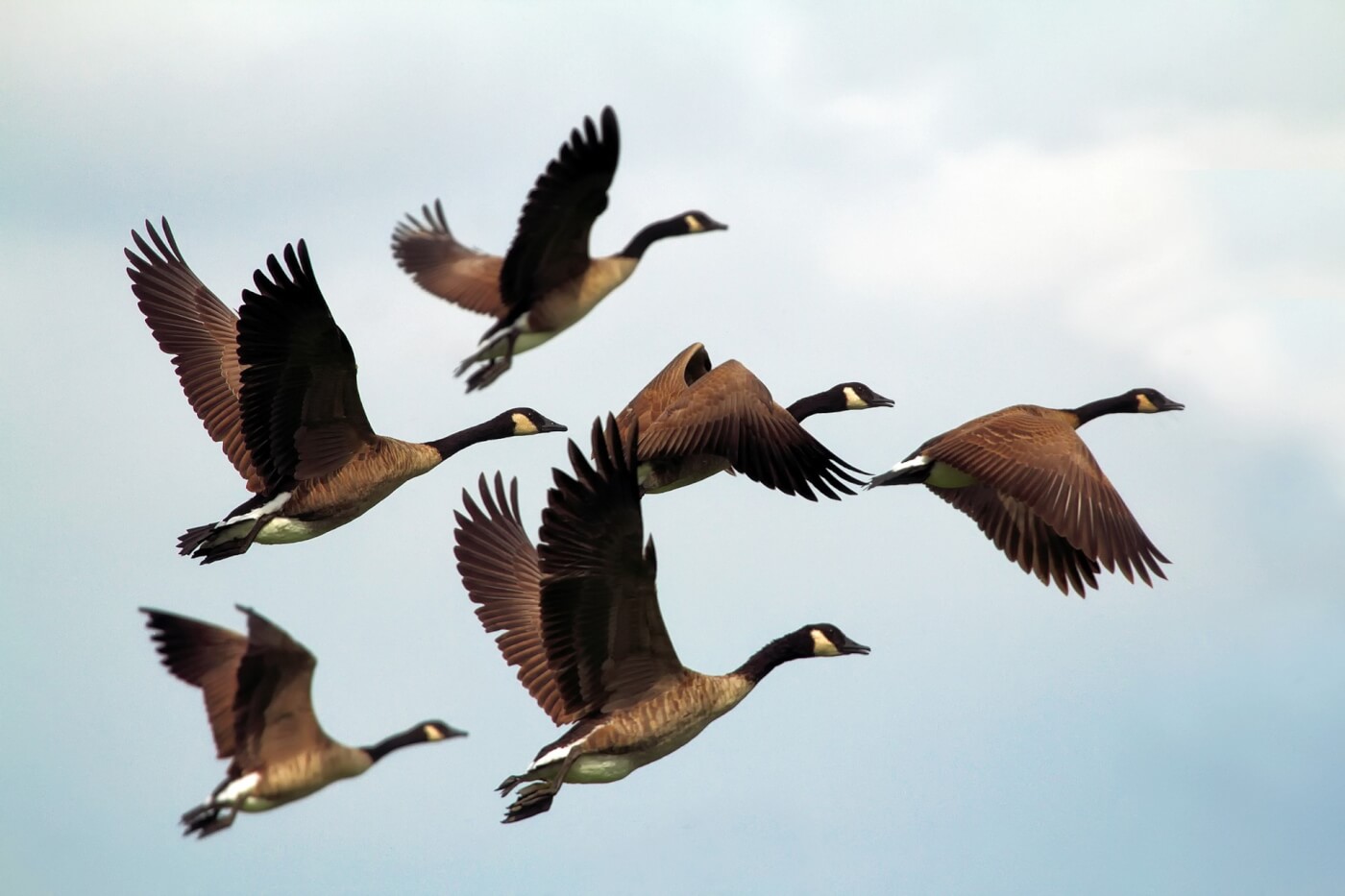 3. Geese are scalded to death for meat and force-fed for foie gras—a cruel “delicacy.”

The meat and foie gras industries aren’t good for the goose or the gander. Those who are raised for their flesh spend their lives crammed in dirty, dark sheds, where they can never migrate, mate naturally, build nests, or raise their young. Then, they’re sent to slaughterhouses, where workers electrically stun them, cut their throats (sometimes while they’re still conscious), and force them into tanks filled with scalding-hot water.

To produce foie gras, workers shove pipes down the throats of geese three times a day to pump up to 4 pounds of grain and fat into their stomachs. This causes the birds’ livers to become diseased and swell to up to 10 times their normal size. Many birds struggle to stand because their engorged livers distend their abdomens, and they may tear out their own feathers and attack each other out of stress.

Did you know that just like many humans, geese are monogamous? The loving birds raise families together and mourn their partner’s death for years before mating again (although sometimes geese widows may be so overwhelmed by grief that they refuse to “remarry”).

5. Ryan isn’t the only talented gosling.

Baby geese are called “goslings,” and we’re here for it! The little birds are quite impressive, too—at just a day old, they can dive and swim up to 40 feet underwater.

6. They’ve got a knack for interior design.

Geese hate conflict. Studies have shown that when geese see other members of their flock fight, their heart rate increases from distress.

8. Workers in the down industry often tear out geese’s feathers in handfuls.

Undercover video footage revealed workers on goose farms tearing live geese’s feathers out, leaving them with bloody, gaping wounds, which were often stitched up without giving them painkillers. Some workers forcefully restrained geese upside down while the terrified birds squirmed and shrieked, trying to get away. Even if they aren’t plucked alive, all geese used for their down are violently killed in slaughterhouses, where standard practice is to hang them upside down, stun them, and then slit their throats.

Geese Deserve to Live in Peace—Help Them by Going Vegan!

Intelligent, social geese don’t want to die for a dish or for their feathers to be stolen for down. Take a stand against the industries that exploit these birds by refusing to wear or eat them and by urging companies like Canada Goose to replace violently obtained down with vegan materials:

See What Geese Endure for Down