October 2 is the birthday of one of the greatest practitioners of nonviolence, Mohandas Gandhi. It is also World Farm Animals Day, a celebration launched nearly four decades ago to stop the suffering inflicted upon billions of terrified animals who are beaten, crippled, and killed on factory farms and in slaughterhouses around the globe—all for nothing more than a fleeting taste of their flesh.

Called the Mahatma (“Great Soul”), Gandhi taught that nonviolence begins with what we eat. “To my mind,” he said, “I hold that the more helpless a creature, the more entitled it is to protection by man from the cruelty of man.”

In his total commitment to nonviolence, Gandhi always included the animals, stating, “The greatness of a nation and its moral progress can be judged by the way its animals are treated.”

These words are even more appropriate today in light of our animal factories and slaughterhouses, where billions of animals never see the sun and die in agony, piece by piece. One can only imagine what Gandhi’s reaction would be to seeing calves taken away from their mothers the day that they are born and immobilized in veal crates or chickens whose beaks are seared off with a hot blade to prevent them from fighting for space in tiny, cramped cages. One can only imagine his reaction to seeing fully conscious pigs screaming as they are dropped into tanks of boiling water and cows looking slaughterhouse workers in the eye as their hooves are cut off.

More than 70 years after his death, Gandhi remains a source of wisdom and inspiration to the world. As we pray for an end to violence and terrorism, please remember his words, “It ill becomes us to invoke in our daily prayers the blessings of God, the Compassionate, if we in turn will not practice elemental compassion toward our fellow creatures.”

Here are some ways you can honor Gandhi’s lifelong commitment to justice, liberation, and well-being for animals.

Commit to going vegan if you aren’t already

If you feel inspired by Gandhi’s mission of creating a peaceful, nonviolent world, commit to leaving violence against animals out of your food, wardrobe, and all other aspects of your life. Going vegan is the best choice for animal well-being, the planet, and your own health.

The way to someone’s heart is through their stomach, so honor Gandhi’s message of never eating meat by welcoming a friend, family member, acquaintance, or colleague into the world of compassionate cuisine. You can find all kinds of tasty vegan restaurants and recipes by checking out PETA’s ultimate guide to vegan food.

Promote a vegan message in your neighborhood

Gandhi’s powerful message of changing people’s hearts through empathy and kindness inspired millions of people to this day. Follow in his footsteps by putting up signs on your lawn, in your window, garage door, mailbox, balcony or other highly visible location that encourage people to wear and eat vegan. Chalk sidewalks with animal-friendly art, and wearing clothes that promote being vegan like our PETA Respect All T-Shirt. 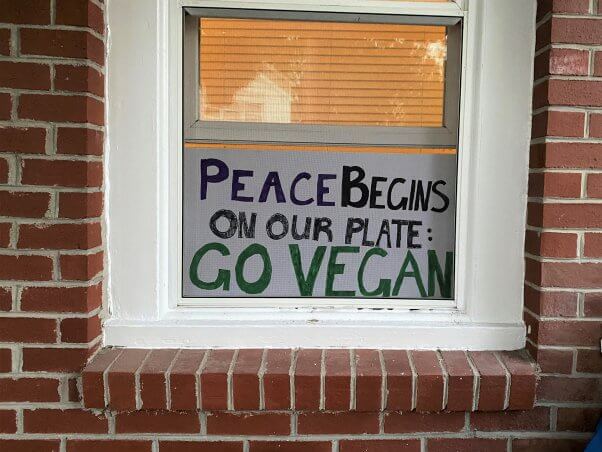 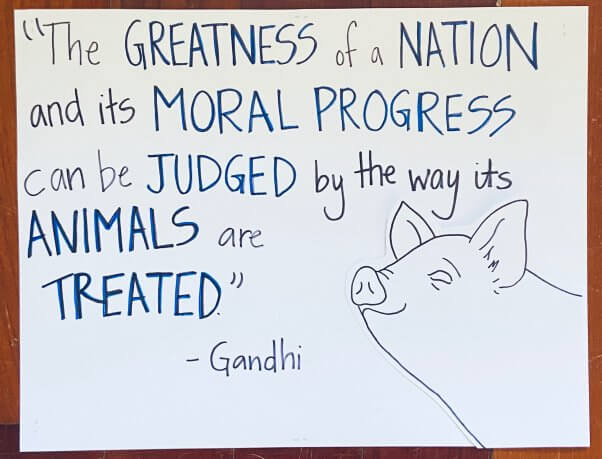 Remind others about Gandhi’s legacy of kindness towards all living things by sharing this post on social media, as well as your favorite PETA videos supporting animal rights.

We may not be able to stop all the violence in the world, but we can lessen the amount of violence in our own lives by asking ourselves: “What would Gandhi do?” Won’t you follow Gandhi’s example and turn your fork into a powerful tool for peace—by keeping the broken bodies of animals off your plate?