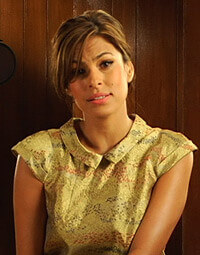 Eva Mendes epitomizes glamour. She has starred in numerous films—including hits such as Hitch, Sin City, and Ghost Rider—and has modeled for clothing and cosmetics giants such as Calvin Klein and Revlon. Eva believes fashion should be fun, but there’s nothing fun about the animal suffering caused by the fur industry.

When Eva learned how cruel the fur industry is—and that there are no laws to protect many of the animals who are raised or trapped for fur—she vowed never to wear fur again. To kill animals without damaging their fur, trappers usually strangle, beat, or stomp them to death, and some are even skinned alive or have their throats cut while they are still conscious.

An undercover investigation of Chinese fur farms revealed that dogs and cats frequently end up in traps and cages and fur is often mislabeled when it’s sold, so there really is no way to know what kind of animal a piece of fur came from. More than half of the finished fur garments imported for sale in the U.S. contain fur that came from China.

Eva says, “At a time when there is so much violence in the world, this is one type of violence that all of us can help stop—by being informed consumers.” Watch the interview to find out more reasons why Eva strongly supports animal rights and refuses to wear fur.

Join Eva in taking a stand against the cruelty of the fur industry and pledge to be fur-free today! Help spread the word about the truth behind fur and share these videos with your friends by posting them to your Facebook, MySpace, YouTube, and other social networking sites.